Americans Are Fleeing Religion and Republicans Are To Blame

Over the past 40 years, Americans have become increasingly likely to deny an affiliation with a religion. The graph below shows that people with “no religious preference” rose from about 5% of the population in 1972 to about 20% today. Overall, however, Americans do not report a corresponding decline in the a belief in God, life after death, or other religious ideas. What’s going on? 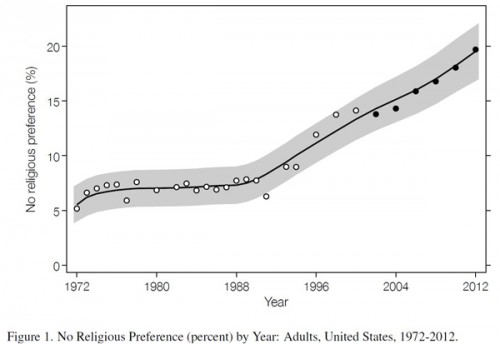 Sociologists Michael Hout and Claude Fischer — the guys who made the graph above — argue that the retreat from religious affiliation is essentially, a retreat from the political right. Religion has become strongly associated with conservative politics, so left-leaning people are choosing, instead, to identify as “spiritual but not religious.”

Here is some of their evidence. The data below represents the likelihood of rejecting a religious affiliation according to one’s political views. The more politically liberal one is, the more likely they have come to reject religion. 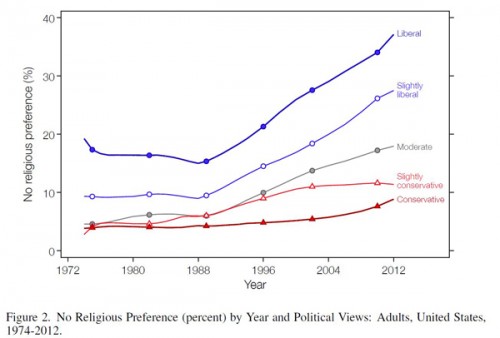 Using fancy statistical analyses, they explain: “generational differences in belief add nothing to explaining the cohort differences in affiliation.” That is, people haven’t lost their faith, they just disagree with religious leaders and institutions.  Hout and Fischer conclude:

Once the American public began connecting organized religion to the conservative political agenda — a connection that Republican politicians, abortion activists, and religious leaders all encouraged — many political liberals and moderates who seldom or never attended services quit expressing a religious preference when survey interviewers asked about it.

Democrats have wondered how to break the association of the right with religion and claim a little bit of moral authority for themselves. It looks like they may not need to or, even, that having failed to do so has a surprise advantage.

Republicans think that Jesus was a white, blue eyed blond, who wanted them to be wealthy at the expense of the poor. They also believe that Jesus wants us to destroy the environment by not regulating businesses and that the Pope is now Satan's handmaiden and a communist.

Republicans live in a World where their dogma is the highest authority; not God, not Jesus, not the President of the uSA, but their own particularly warped point of view. Poor people should just die already, because if God wanted them to live, he would have made them rich enough to be able to afford $1500 per month for health insurance; they truly believe that a Man who has gone to the same Christian Church for the last 23 years is actually a Muslim..!! They think that facts that oppose their dogma are to be attacked and that scientist who prove them factually wrong should be vilified and professionally destroyed for daring to point out that their insanity is in fact insane.

What the hell has happened to the right wing in this country? When did denial of fact and hatred of science become paramount to their political lives?

I am a moderate. However, I dislike the Republican party overall because it does feel that they highjacked the "moral right" and want to be in the position that priests used to be in. (Yes, you can insert a pedophile joke here.) I still feel the same way about my religion - however, I do not talk about it in public because I HATE the way it's assumed that I am a blind sheep. I don't believe anyone's dogma, certainly NOT a politician who is NOT of the same faith BUT still proceeds to tell me how I feel. They don't know.
That's why I fall inside the 20% that admit their feelings about God, life after death, morality, etc are the same. I am often inside of a church. It's none of anyone's business which one, where or what anyone else thinks I am told to believe.

Alas! I have become a statistic.

My first thought as well, Seth. Correlation does not equal causation. I teach introductory sociology and use examples from this website regularly, as some are very insightful and useful to demonstrate concepts to students in a fun way, but this post disappoints me.

The fact that organized religions have aligned strongly with conservative politics, not the republican embrace of Christianity, is responsible for the defections of liberals. Don't blame the republicans, blame religion for its own demise.

When the Evangelicals turned against the planet, that's when I lost any respect I had for them. Politics is one thing, but hating our home world is disgusting.

AMERICANS ARE FLEEING RELIGION AND REPUBLICANS ARE TO BLAME | Welcome to the Doctor's Office — January 28, 2015

As someone who "secularized" thanks to a solid college education, in a generation that attended college more than any that preceded, I think their assertion that there has been "no secularization" to be horse manure, not to put too fine a point on it.

As I've correctly pointed out many more times than I can remember, the Republican Party's politicians (and a minority of the party's voters) are Fascists. One of the "defining characteristics" (to all 17 of which the GOP adhere) of Fascism is the intertwining of religion and government. The Fascist regime (remember, GOP here and now) "attaches" itself (I usually call it a "hijacking") to the country's predominant religion and, instead of adhering to its precepts, uses it to justify their Fascist ideology and actions.
The reason so many of the voting majority of the GOP, the Progressives and Moderates, don't realize this regards two other "DCs" of Fascism: control of the mass media and propaganda campaign employed. The GOP Cons have control of 90% of the media in this country, despite their propaganda to the contrary ("Liberals control the media" LOL). And, the Fascist Cons use that control of the media to either spew their Fascist "gaslighting" propaganda upon us or, even worse, simply have the media they control ignore the sad truths about the GOP, when they're not quoting false equivalency.
If the FCC hadn't voted to preserve net neutrality almost two weeks ago, the Cons would have controlled ALL media inside of six months. So, there is still free speech...for now.

This article is really good for all newbie here.
rankerhub

very informative there is no doubt about it. Thanks for sharing this information with us