Most Americans, when asked if they are affected by advertising, will say “not really.” They think other people are influenced by cultural messages, but that they are somehow immune.

Whether people are shaped by the media they consume seems to be a perpetual question. The fact that billions of dollars are spent every year attempting to influence us is probably a sign that advertisers know it works. Scientists get in on the action, asking pressing questions like: Do violent video games increase violence in real life? Do sexy, thin models hurt girls’ self-esteem? We do the studies and the answers are often inconclusive, probably because of how complicated the relationships are.

Psychologist Stefano Ghirlanda and his colleagues asked a slightly simpler question: Do celebrity dogs influence the popularity of dog breeds? They looked at 100 movies with prominent dog characters from 1939 to 2003 and compared the release date to breed registrations. The answer seems to be: with the exception of box office flops, yes. 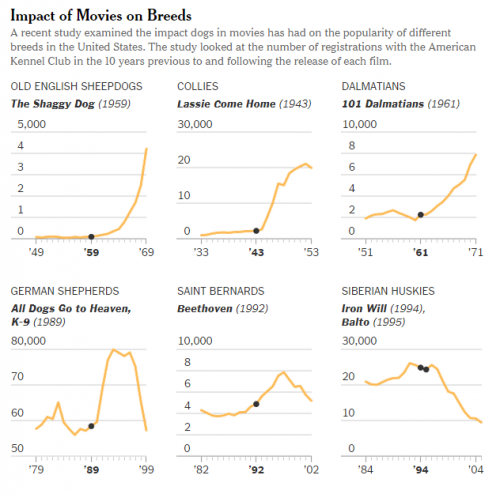 Given that many dog movies are made for kids, I’d be interested in the mediating role of parenthood. Companies that make children’s products like sugary cereal know that they can get the parent to buy their product if the kid is annoying enough about it. So, they market to children directly. I’d love to see if people with and without small children were equally affected by the breed of dog in this year’s movie.

The researchers method of popularity, moreover, was registration with the American Kennel Club. Pure bred dogs are expensive. So, I wonder if the power of these trends varies by social class. If a family can’t afford a “Beethoven,” they may be more likely to just adopt a mutt from a neighbor’s litter.

In any case, though, this seems like incontrovertible evidence that we’re influenced by mass media. But you already knew everyone else was, didn’t you?

Great! This just appeared on my reader :-) I am one of the authors of the research, thank you very much for your interest! I wrote some more about it here: https://acerbialberto.wordpress.com/2014/09/11/dog-movie-stars-and-dog-breed-popularity/

The chart for Siberian Huskies is interesting in that the numbers actually appear to have declined, as if people saw those movies and said 'no thanks'.

A lot of these data points seem old. I think (and hope) things are different now, with people deciding to do research on the breed before just going and getting one. Access to information has changed and is now easier than ever, and people may also have more awareness that some breeds do not make good pets for the average household.

I was going to say "What about Marley and Me?" but I imagine golden retriever sale rates are always high...

I think you almost had it! Yes, young kids are influenced by the excitement of the day and movie about a dog made to love can be quite influential. And, yes, parents buy dogs for their kids and if the kid wants the dog of the day she'll likely get it.

But you blew it in your closing... You make the leap that kids' influences present "incontrovertible evidence that we’re influenced by mass media". I don't think so.

Intelligent adults can weigh advertisements on TV and in mass media in general and decide for themselves what to buy. In fact, most products fail and to me that's "incontrovertible evidence that despite the attempts of mass media to persuade us to buy specific products we buy what we like and ignore the rest".

We are surrounded by half-full glasses Lisa...

movies reflect reality too so any evidence it is not the other way round (namely: film makers chose breeds that are popular at one point in time)

The data isn't presented well (e.g. see fluctuating x-axes and non-standard y-axis on German Shepherds). Also, a measure by *percentage* of registrations would be much more probative than total registrations. A counter-explanation with these numbers is that people got more interested (for other reasons) in buying dogs and/or registering them.

It would be interesting to see if there is a significant relationship between the election of a US President and the ownership of that President's breed of dog. I'm going to guess that there likely is.

No doubt, dog movies often influenced me a lot in lots of different ways. I am not a dog owner but after watching few movies about dog companionship on Nova TV APK Now I am considering to own a dog. :)

If you like watching movies and TV series then you should have the app UnlockmyTV in your smartphone.

https://unlockmytv.me/ is the best app for watching movies and TV series

UnlockmyTV is the best app for watching movies live.

http://tekki.me/ is the site to get any app you want.

Cyberflix is one of the best class movie apps among Android users. If you have an Android phone, you can get it started to enjoy your favorite Movies and TV Shows that you have missed watching on TV. The major reason behind the success of Cyberflix TV APK is that it has a bunch of fastest link resolvers that you cannot find out in any other app. Cyberflix TV App

If you are facing any software related issue in your mobile, IMEI issue, boot loop issue, you can use the firmware file to fix all the issues.
https://firmwareflashfiles.com/lyf-ls-4503/

This is an amazing app to try for streaming

After the closing of Terrarium TV, there are 100’s of streaming app released but the only app which is closed to terrarium or even better than terrarium app is CyberFlix App. It offers huge collection of TV Shows and Movies on the App in extremely high speed server.

Watching movies have been always difficult. There is no app which helps you to watch all moveis but this movei app can help you to get all moveis free