Language and Presidential Addresses: We, Free, and the Public Good

What do we mean when we say “we”? Or more to the point, what does the president mean when he uses that word?

The Atlantic has an interactive graphic (here) showing the relative frequencies of words in State of the Union addresses. (“Addresses” because I’m choosing my words carefully. These were not “speeches” until Wilson. Before that, it was written text only.) Here “we” is. 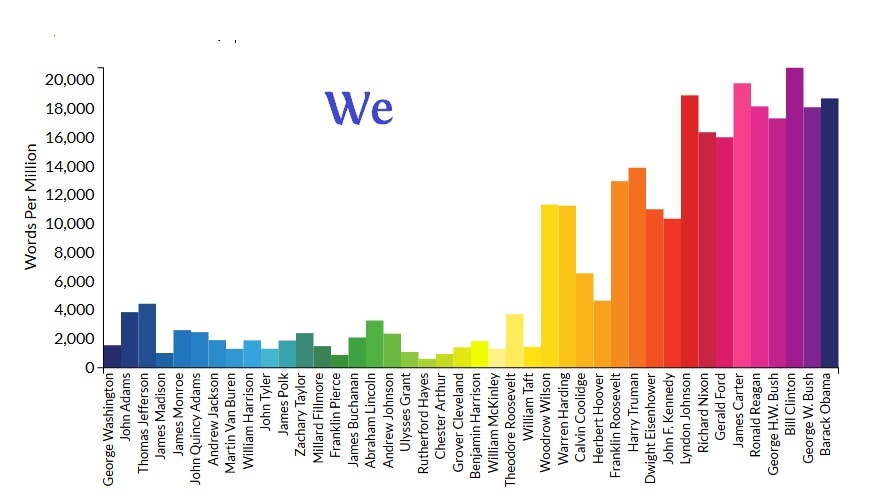 The rise of “we” seems to parallel the rise of big government, starting with Wilson and our entry into a world war, followed by a brief (10-year) decline. Then FDR changes everything.  “We,” i.e., the people as represented by the government, are doing a lot more.

Sorting the data by frequency shows that even in the big-We era, big-government Democrats use it more than do Republicans.  (JFK used We less frequently than did the GOP presidents immediately before and after him. But then, it was JFK who said not to ask what the government could do for us.) 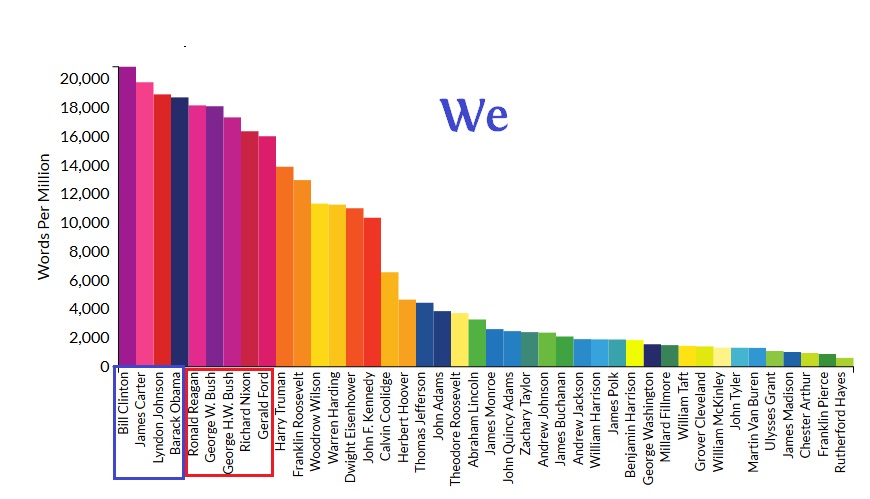 Other words are less puzzling. Freedom is a core American value, but of late (the last five or six presidents), it’s the Republicans who really let it ring. 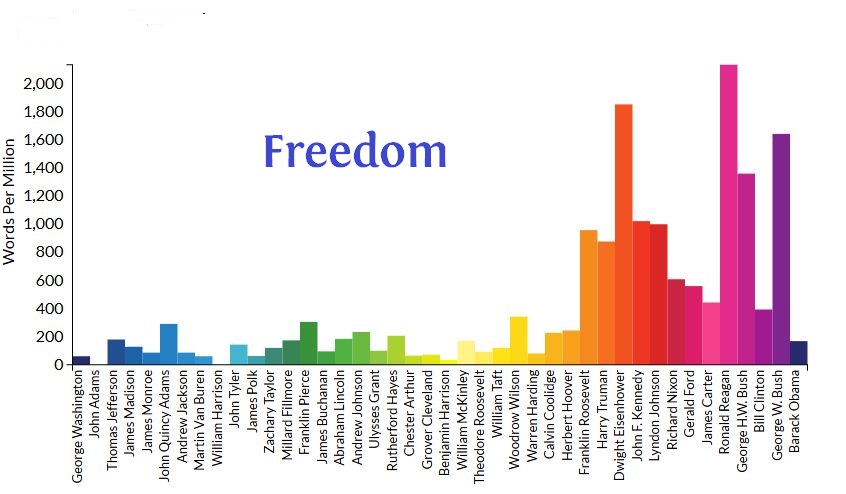 As with We, Freedom gets a big boost with FDR, but Freedom for Reagan and the Bushes is not exactly FDR’s four freedoms – Freedom of speech, Freedom of religion, Freedom from want, Freedom from fear – especially the last two. Nor is it the kind of freedom LBJ might have spoken of in the civil rights era, a freedom that depended greatly on the actions of the federal government.  Instead, for conservatives since Reagan, freedom means the freedom to do what you want, especially to make as much money as you can, unbothered by government rules, and to pay less in taxes.

Freedom in this sense is what Robert Bellah calls “utilitarian individualism.”  As the word count shows, freedom was not such a central concern in the first 150 years of the Republic. Perhaps it became a concern for conservatives in recent years because they see it threatened by big government.  In any case, for much of our history, that tradition of individualism was, according to Bellah, tempered by another tradition – “civic republicanism,” the assumption that a citizen has an interest not just in individual pursuits but in public issues of the common good as well. 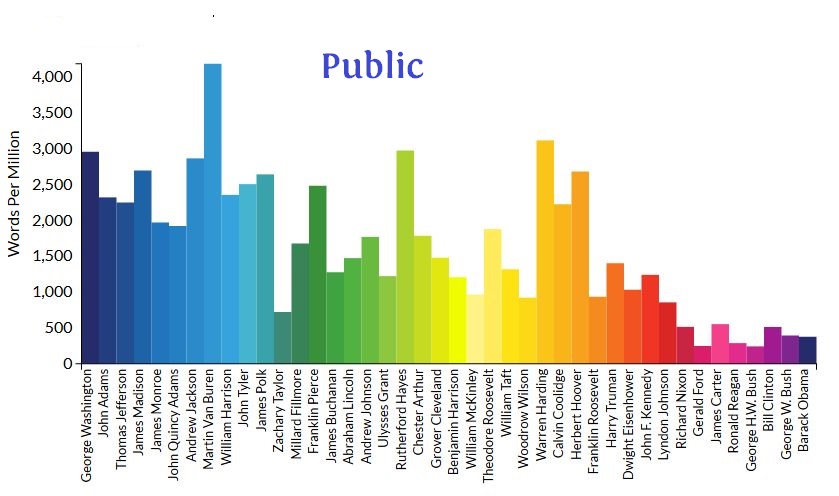 That sense of a public seems to have declined. Even the “collectivist” Democrats of recent years use the term only about one-tenth as much as did the Founding Fathers. Washington, Adams, Jefferson, Madison – their SOTUs had more than ten publics for every freedom.

I checked one other word because of its relevance to the argument that the U.S. is “a Christian nation,” founded on religious principles by religious people, and that God has always been an essential part of our nation. 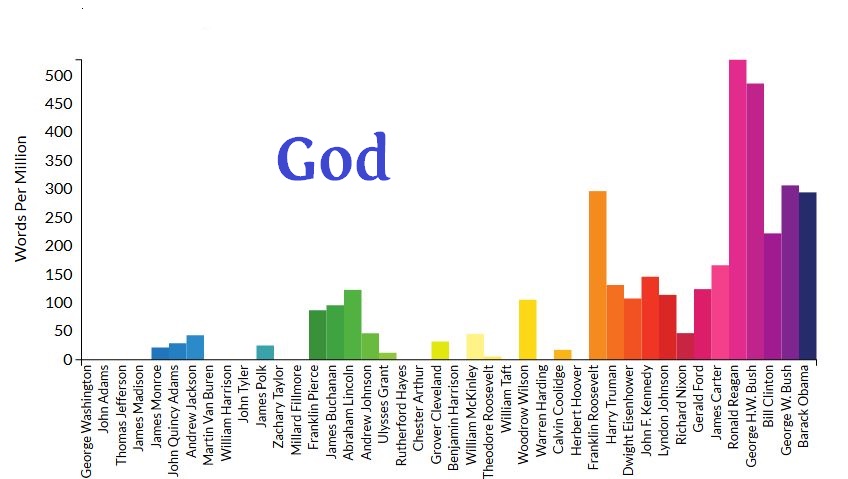 The Almighty, at least in State of the Union addresses, is something of a Johnny-come-lately. Like We, He gets a big boost with the advent of big government. FDR out-Godded everybody before or since, except of course, the Bushes and Reagan.

Update: I just noticed that the two “Gods” in that sentence work out to a rate of 200-300 per million. If tag lines like that are included as part of the text, that accounts for the higher rate since FDR. It’s not about big government, it’s about radio. Prior to radio, the audience for the SOTU was Congress. Starting with FDR, the audience was the American people. Unfortunately, I don’t know whether these closing lines, which have now become standard, are included in the database. If they are included, the differences among presidents in the radio-TV era, may be more a matter of the denominator of the rate (length of speeches) than of the numerator (God). FDR averaged about 3500 per SOTU. Reagan and the Bushes are in the 4000-6000 range. Clinton and Obama average about 7000. So it’s possible that the difference that looks large on the graph is merely the difference between a single God-bless closing and a double.

Language and Presidential Addresses: We, Free, and the Public Good - Treat Them Better — January 21, 2015

[…] Language and Presidential Addresses: We, Free, and the Public Good […]

[…] In Closing: keep looking up; a research problem; unfortunately I doubt they mean it; finally somebody thought about it (at least a little); Dayton; civil rights; words. […]

[…] assortment of whatever! things! genericness! – which is why politicians probably love it. In Language and Presidential Addresses, the Society Pages breaks it down and even examines what “freedom” is. The ambiguity, […]