From Reddit comes the story of an assignment given to high school students in a sex education unit of health class in Columbus, Ohio (as reported in theDispatch). The introduction reads (typos included):

Appreciating Gender Differences: Often there are many stereotypes attached to being male or female. Yet male and female together keep our species alive! Through knowing and appreciating the many differences in brain development and psychological processes of males vs. female one learn to accept and appreciate the differences.”

Then there’s this graphic: 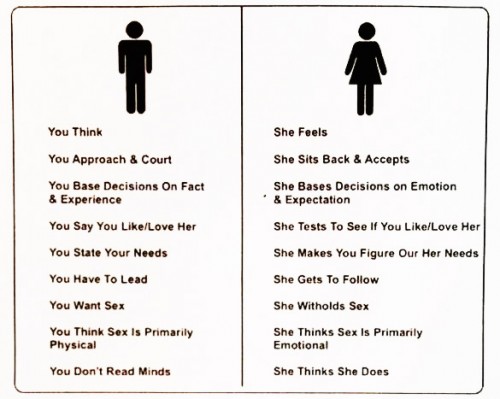 Yes, boys and girls in the class all got the same handout, with the normal human described as “you” and the one in the dress labeled “she.” After the graphic is a list of questions for the students to ponder in an essay, such as, “How might knowing these differences influence and impact an intimate relationship you might currently have or develop in the future?”

In her defense, the teacher naturally told the Dispatch that the point was to just “stimulate conversation.” But nothing in the assignment suggests the stereotypes might not be anything but true. None of the essay questions cast doubt on the facts presented. Consider revising the text like this:

Appreciating Gender Similarities: Often there are many stereotypes attached to being male or female. Yet male and female together keep our species alive! Through knowing and appreciating the many similarities in brain development and psychological processes of males vs. female one learn to accept and appreciate the similarities.”

That could be a useful opening to a unit on gender and development for high school sex education (without the graphic). Where did this come from? The teacher said it came from “an outdated book.”

With the power of Google image search, you can follow this image around the Internet, where it has been used by a lot of people to illustrate supposedly funny-but-oh-so-true stereotypes, like “Hilarious differences between men and women,” and on pages with sexist aphorisms such as, “A woman worries about the future until she gets a husband; a man never worries about the future until he gets a wife,” and on relationship advice pages, with conclusions such as, “If we understand this basic fundamental, there will be better relationships … steadier !!,” and even “Real, Honest Female Advice” for men who want to “start having unbelievable success with women.” It always has the same typo (“Figure Our Her Needs”).

I can’t find an original use, or any serious attempt at educational use, but I’d love to know who came up with it.

Philip N. Cohen is a professor of sociology at the University of Maryland, College Park. He is the author of The Family: Diversity, Inequality, and Social Change and writes the blog Family Inequality. You can follow him on Twitter or Facebook.

Kidding aside that's the stupidest handout I've ever seen. Reads like a Dean Martin song from 1957.

Those "teaching materials" started to give me a headache while reading them. So much just plain, "no, no, no, no, no," mixed with, "what the what!?" was too much for a morning read.

I'm a female from Ohio. This explains a lot about my people. lol From being a toddler on to current, I have always wondered if people who said things like this about me were too stupid to figure out it wasn't true (and should stop annoying me because I love math) or whether they couldn't figure out that I was female (possibly because they were stupid). Whoever this teacher is, she's not helping people - she's damaging future relationships.

I think the "You think / She feels" is the most depressing one of all. Women don't think, men aren't allowed to feel. What a sad existence. This graphic is terrible for men and woman alike.

So lovely to see my high school make the news...

[…] tell you what the NSA is doing, but we aren’t planning on stopping; institutional sexism; a third of Americans think cops are liars; Target pulling out of Canada; on a living […]

"The handout was part of a “science of sex” unit in teacher Lezlee Levette’s health class. Levette said she took the handout from an outdated book to stimulate conversation about how attitudes have changed over the years and “how do these stereotypes affect you in your life.”" Source: http://www.dispatch.com/content/stories/local/2014/11/26/health-class-handout-draws-jeers.html

as i teacher i can use this as a discussion peace "whatt think about this? is it true? what are the negative cogitations" but you have to get the students to understand this is not the truth this is the negative stereotype

The hidden assumption here is that men ("You") have agency and women ("She") do not.

This really bothers me, so I have to point it out--in the "rewrite" of the opening text, the sentence "Yet male and female together keep our species alive!" is not changed. Male and female are two genders, not two sexes. Gender does not equate with sexual orientation or the sexual act. Perpetuating the idea that sex and gender are the same thing is a terrible oversight.

This lesson positions women as the "other" both by depicting them as passive objects and by referring to them in the third person. The male students ("you") are spoken to, while females ("she") are spoken of.

This is from the original article, not Reddit (and should have been included in yours, since it's relevant):

'The handout was part of a “science of sex” unit in teacher Lezlee
Levette’s health class. Levette said she took the handout from an
outdated book to stimulate conversation about how attitudes have changed
over the years and “how do these stereotypes affect you in your life.”

But don't let the facts slow down the Outrage Of The Day and the need to hang a teacher.

This is what happens when legitimate sex differences research trickles down to narrow-minded folks with extreme political agendas. These students are in for a rude awakening when they hit the real world and find that women
are making decisions about their loan applications,their local and national
legislation, and their medical treatment. Oh, and don't forget that if they date (or marry) women who actually want sex and try to initiate it, this means their girlfriends (or wives) must be "whores" because "nice girls don't like sex."

Here is an example of people criticising and/or condemning a person, a subject or an activity without understanding the overall "context."

They're both capable of each, they both do each, we just have societal norms dictating behavior by gender that haven't gone away that this is
reinforcing. We also are a culture that will do what we can get away
with and will try to fit a presented mold to avoid scrutiny (It's part
of normalizing a 12-16yr old mentality range. You get people stuck in HS
with generalizations instead of thought and understanding to make
things "easy". ) So if it's "not girly" or "not manly" people will worry
more about an appearance to act by than anything else. If not they may
hit scrutiny for it. That means they'll present it in a form "fitting of
gender" because behavior (we talking what is and isn't acceptable as
well as whether it is or isn't actually acceptable) is learned. This
isn't everyone, but like our merger of "outdated ideals" and
"materialistic levels" that have been applied to dating, it affects
enough people to be a problem to those who don't actually fall under
this.
It's about as profound as using a hammer as a cure for a headache. It'll get
you the same results as "hammer headache cure" when it comes to
building a functional mentality that can recognize humility, self
understanding, and how individuals work too.

All of it is psycho misogynism. It's even stupid with the "You" and the "She".

Fire the teacher. How absolutely disgraceful that can educated woman would use such a stereotypical and degrading tool to subject a young female mind to.