If you’re like me, you probably grew up hearing a charming story about John Chapman, aka Johnny Appleseed, in which he planted apples across America so that no one would ever go hungry again. The image, overall, is of an eccentric but kindly man who went around planting apples so pioneers could have fresh, healthy fruit to eat. Here’s the 1948 version of the story from Disney, if you have 15 minutes:

In his book The Botany of Desire, Michael Pollan discusses Johnny Appleseed. He really did exist, and he did travel around the frontier planting apples from apple seeds and later selling the apples to pioneers (and apparently giving lots of trees away, too). He was, by all accounts, extremely eccentric, wearing sackcloth as a tunic for clothing, going barefoot much of the time, and so on. He was a vegetarian, though I don’t know if chipmunks and other animals pranced around in the woods with him. 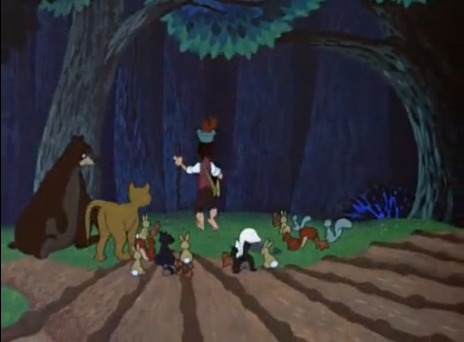 But there’s a little detail the Disney movie and all the kids’ books about Johnny Appleseed got wrong. His apples weren’t for eating. They were for liquor.

Apples don’t grow “true” from seeds — that is, if you plant a Granny Smith apple seed, the tree that grows will not produce Granny Smith apples (the vast majority of the time, anyway). The only way to be sure what kind of apples a tree will produce is to graft limbs onto it from another apple tree that has the kind of apples you want. Most trees that grow from seeds produce smallish apples that are bitter and very much unlike the glowing waxed fruit we’ve come to associate with health and a good diet. People would not want to eat those apples. But what they could do with them is turn them into apple cider, alcoholic apple cider.

For much of American history, alcoholic beverages were widely consumed by both adults and children. Before clean water was necessarily available, it was safer to drink alcohol, particularly in cities.

So how did we go from apples as source of liquor to apples as healthy fresh fruit? According to The Straight Dope,

We stopped drinking apples and started eating them in the early 1900s. The Women’s Christian Temperance Union publicized the evils of alcohol, the movement towards Prohibition was gaining momentum, and the apple industry saw the need to re-position the apple… We can thank prohibition for shifting the image of the apple to the healthy, wholesome, American-as-apple-pie fruit that it is today.

Anyway, it’s sort of a funny instance of both the way we sanitize history and of re-branding. Most of us, raised on images of Laura Ingalls Wilder, can’t imagine early pioneers drinking alcohol all day and happily giving it to their children, or that there might be legitimate reasons for doing so (protecting your kids from getting dysentery from polluted water, for instance). And apples have become such an icon of health that the idea of campaigns against them as sources of liquor is unimaginable.

I remember how Neil gaiman repeats several times after his book American Good, how Johny Appleseed and paul bunyan were empty myths created to fill a boyd normally full of legends of old in the countries with more stories. Its really interesting this need of myths that we need, creating characters with scraps of reality to make it legends, because as a human we need those stories.

wow, that's really interesting. wasn't it the same way with beer in Europe? since beer was boiled, it was safer to drink than water...

But, when water was unhealthy, the apple liquor was. So, it was still healthy (and fermentation doesn't necessarily rid the apples of any nutrients, since yeast only converts sugar into ethanol, except fiber. I mean, look at how much press wine gets for being like... well... eating grapes, but without the fiber.)

Just a little food for thought. :)

It also may be worth pointing out that cider, properly made, tastes absolutely amazing.

"fermentation doesn’t necessarily rid the apples of any nutrients, since yeast only converts sugar into ethanol"
In fact, fermentation actually makes some foods more nutritious. The yeast adds lots of B vitamins and other essential nutrients to a diet the might otherwise be impoverished. In South America, corn was (and is) used to make chicha (an alcoholic beverage), which was far more nutritious than many other corn based products.
Nowadays, with all of our fortified foods, this probably isn't much of an issue, but in colonial times it certainly would have helped to ferment your foods.

I watched both parts of the Disney video, and being someone who's getting into American Indian stuff right now, I noticed that the Johnny Appleseed legend sanitizes history in another way, namely Manifest Destiny and colonization of America. For example, in the second part of the Disney Johnny Appleseed video (which can be seen after the first part of the video in the post) there's a scene where Johnny Appleseed looks on a dance that includes white settlers and Indians, because he enjoys seeing how his apples "bring people together". This of course erases the conflicts between white settlers and Indians when settlers got the "frontier spirit" and moved west. Although that's just the Disney video as a sample, the whole Johnny Appleseed legend as a whole seems to sanitize Manifest Destiny and its effects.

I am always amazed at how much I thought I knew, that I really didn't know.

Its been awhile since I read Botany of Desire, but wasn't there a child-bride?

What stuck out to me, for some reason, was the fact that AppleJack - the wholesome children's cereal - shares its name with a liquor made by freezing apple cider and skimming the liquid off the top.

i have been thinking about this movie lately too, i think that its interesting that were jonny appleseed to do that today, he would be likely to get sued by the agricultural industry. farmers who being sued by monsanto for patent infringement for saving seeds from harvest for future seasons, or for growing plants from seeds blown into their fields from neighboring farms. farmers have to sign a license when they buy seeds and agree to grow the plants only once and buy seeds again next year.

I have to say I do wonder if those of us who live in a world of Granny Smiths, Red Deliciouses, Galas, Pink Ladies, etc. are making a biased assumption that non-breed-specific apples are basically inedible. Just because we think of apples as big, juicy and sweet doesn't make these qualitites essential to the apple or the ability to eat it.

I've eaten a lot of "tiny" apples in my life - little bitter ones from the tree in the back yard when I was a little kid, and little fairly sweet ones in Kazakhstan, the "birthplace" of the apple, although I can't say if these are seed or graft trees.

[...] on children, or the idea that drinking cocktails around the kids is problematic (and remember, we used to give kids alcoholic drinks and Marlboros were marketed to moms). And many people don’t believe that children need to be [...]

[...] Images has an interesting post up today on the real Johnny Appleseed. Turns out he wasn’t planting apples for the pioneers to eat [...]

[...] let’s start off with a song to get us all in the mood. From the Disney film The Legend of Johnny Appleseed. The full version (in two parts) can be seen here — narrated by James Earl [...]

How I despise too-good-to-be-true history myths! We'd be so much better off if we just told the checkered truth of American history, rather than turning everything into fables of how good we are. We aren't any better than anyone else, and we never have been.

[…] In Closing: Stingray; the London Stone; Women of the Senate; with more people identifying as liberal, I wonder when politicians will stop fearing the word; climate denial; policy; and the Real Johnny Appleseed. […]

The lard is good to me, and so I thank the lard.

[…] If you’re like me, you probably grew up hearing a charming story about John Chapman, aka Johnny Appleseed, in which he planted apples across America so that no one would ever go hungry again. But there’s a little detail the Disney movie and all the kids’ books got wrong. His apples weren’t for eating. They were for liquor. The Society Pages […]

[…] Johnny Appleseed planted apple trees in order to make booze for frontiersmen, as the type of apple he planted was almost inedible. – Source […]

Most people have no clue that fast growth shampoos (obviously with no sulfates, no parabens or DEA) even exist. Persons now may enjoy longer hair and achieve more possibilities. Definitely worth looking into it.
Whether you're assessing alopecia, damaged hair, preventing scalp disorders, fast hair growth, hair care in general, almost the same rules come to mind.
Generally, you will want to stay away from hair products and treatments that contain chemicals like parabens, DEA and sulfates.
What is healthy for your hair is healthy for your skin all the same.
Obviously your content above is so accurate for many reasons. It avoids the common pitfalls and pitfalls so many fall into: utilizing bad alternatives. Thank you so much!