Chart of the Week: 1,500 Estimates Suggest a Higher Minimum Wage Will Have No Effect on Jobs

One of the arguments against an increase in the minimum wage is that it will lead to higher unemployment.  One can make theoretical arguments for and against this proposition.  And, of course, the income gains from an increase in the minimum wage are likely to produce overall benefits for both low wage workers and the economy as a whole even if there is a rise in unemployment.

Economists have tried to estimate the employment effects of a rise in the minimum wage.  As a Vox article describes, two of them, Hristos Doucouliagos and T.D Stanley, looked at almost 1,500 estimates of the effects of minimum wage increases on employment and found that the estimates “clustered right around zero effect, but with more of those estimates showing a slight downward pressure on employment.” 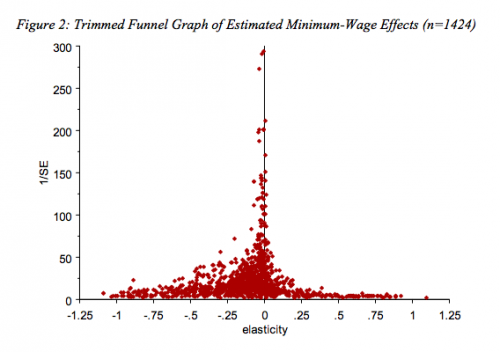 They concluded, “with sixty-four studies containing approximately fifteen hundred estimates, we have reason to believe that if there is some adverse employment effect from minimum wage rises, it must be of a small and policy-irrelevant magnitude.”

Chart of the Week: 1,500 Estimates Suggest a Higher Minimum Wage Will Have No Effect on Jobs - Treat Them Better — January 3, 2015

[…] Chart of the Week: 1,500 Estimates Suggest a Higher Minimum Wage Will Have No Effect on Jobs […]

How far out are they looking? I've seen conflicting studies and it seems that some are looking immediately after the minimum wage takes effect and some jobs are lost, while others are looking further down the road when increased spending power leads to increases in employment.

Price
floors in the labor market only hurt the poor. A homeless/poor man can
no longer pump gas for customers at gas stations for, say, 5$ an hour
because of the minimum wage law.

Increasing
the minimum wage will never add jobs either. The example above
demonstrates how, in fact, it does lead to lower employment for the
poor.

And even if it did have zero effect on unemployment (which, historically it hasn't), prices would just rise.

Not to mention advocating for a price floor involves violence. Zero good can come from it.

Let's try a thought experiment - if increasing the minimum wage will help the poor, why not REALLY increase the minimum - and help more? Let's make the minimum wage $50/hour. Or $100/hour. Obviously that won't work. Unemployment will increase because the average worker will not be able to give their employer $50/hour worth of value. Plus prices on everything will rise to offset the increased cost of labor.

No one has ever adequately explained me to me why increasing the minimum wage to $15/hour (or $12 or $10) would not have the same effect as increasing it to four times that.

Behind a paywall but the abstract is there:

The Minimum Wage and the Great Recession: Evidence of Effects on the Employment and Income Trajectories of Low-Skilled Workers; Jeffrey Clemens, Michael Wither; University of California at San Diego; Issued in December 2014

...minimum wage increases had significant, negative effects on the employment and income growth of targeted workers.

...minimum wage increases significantly reduced the likelihood that low-skilled workers rose to what we characterize as lower middle class earnings.

Cutting off the bottom rungs of the employment ladder, forever, dooming hundreds of thousands of disadvantaged youths to a lifetime of poverty.

how small is "a small and policy-irrelevant magnitude?" From a Pareto welfare economics perspective, you cannot make interpersonal comparisons of utility.

From the perspective of John Rawls, many of the people worse affected by the disemployment effects are low skilled adult workers – members of the most worse off groups in society.

Why not just increase the earned income tax credit? That will have no adverse employment effects on the worse off groups in society?

This is an astounding bit of dissonance here. The article that the author quotes from Vox is called: "Study: The 2007 minimum wage hike cost more than 1 million jobs during the recession". The jist of it is exactly the OPPOSITE of what Martin Hans-Landsberg is saying. This is just fraudulent behavior. Do go to the original link, you will be surprised.