What Sociologists Can Tell Us About Serial Killing

In 1897, sociologist Émile Durkheim published research arguing that suicide – something previously believed to be decidedly unsociological – could be understood as a social phenomenon. He pointed out that suicide rates are not evenly distributed in or across societies; that cultural or structural factors might influence individuals’ risk of suicide, regardless of their individual psychologies; and that those factors might explain the variation.

Recently another set of sociologists borrowed Durkheim’s approach, substituting serial killing for suicide. James DeFronzo and three of his colleagues asked whether cultural and structural variables might predict state variation in the rate of male serial killer activity. This, it turns out, varies quite widely, as DeFronzo et al. write:

To do the study, the authors drew on existing literature, positing seven factors that might increase the rate of serial killing in a state.

For the cultural factors, the authors considered variables that might indicate a high tolerance for or presence of violence. They argue:

Norms prescribing or tolerant of violent behavior contribute to shaping the fantasies of the developing serial killer, help to objectify and dehumanize potential victims, and consequently provide a necessary link in converting sexually sadistic urges in the violent behavior.

As measures of this, they include the overall homicide rate in the state, whether the state is in the South (see the “culture of honor” thesis), and the use of capital punishment.

Model 1 (the first column of numbers) shows the relationship between our independent variables and the state where serial killers committed their largest number of murders. Model 1 offers good evidence that social structural variables influence whether serial killers actually kill. Vulnerable individuals living in high density environments may enable these crimes. 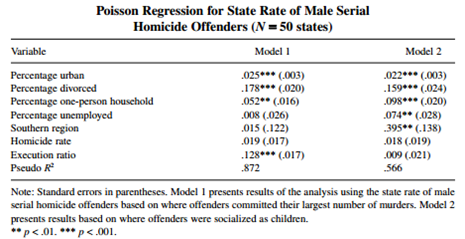 Model 2 (the column on the far right) shows the relationship between the independent variables and where offenders were socialized as children. DeFronzo and his colleagues don’t theorize a relationship between their structural variables and the production of a young serial killer, so the significance of these relationships are a mystery. It might be, they argue, just an artifact of the fact that most serial killers killed in the same states in which they were raised.

One cultural variable was significant for this model: Southern region. Being exposed to violence as a child can trigger a genetic potential for violence that would otherwise remain unexpressed. Or, Southerners may simply grew up with greater tolerance for and approval of violence.

Like Durkheim, DeFronzo and his colleagues show us that even phenomenon we think are explained by other disciplines can benefit from sociological analysis. Thanks to their research, we now better understand the factors that increase the risk of being a victim of serial homicide. This is a great example of how we need all of the sciences to put together a complete picture of the world we live in.

I've always considered America to be both violent and tolerant of violence as a solution to various problems so I'd be interested in an international study like this. We were formed from violence, lived with intimate violence for a couple centuries of slavery, committed widespread genocide of the indigenous population for a 150 years or so, and are routinely and centrally involved in international wars--entering many by choice.

One notably absent strain of independent variables is experience in childhood and adolescence. The models above get lift from divorce, living alone and unemployment. I'd imagine you could eliminate some more noise from these variables by the use of developmental factors.

There has been a conscious (intellectually and morally bankrupt) attempt to link serial killers to recent mass shooters, then link both to 'toxic masculinity.' Of course, 'toxic masculinity' is a term used to attack masculinity in general. Is this what you are up to as well? Because I picking up something sleazy between the lines . . .

These are correlational relationships, not causative ones, and as such you should be very careful in how you interpret them. It is just as probable that whatever factors affect the independent variables (like divorce rate) also affect serial killer development, and not that divorce rate, etc. itself does. Please be more careful with your wording!

Expanding on what Bill R says- I'd think there is considerable variation within most states, primarily between urban and rural areas. Florida and California both have areas of high urban density and areas of sparse redneck populations. Both create additional factors where the urban ones have the high density issues and the rural ones may have higher degrees of isolation and more "culture of honor" factors. To really parse this, it would take a much finer resolution inquiry, perhaps at least by county.

Couldn't this be less about Southern culture and more about the lack of standardized child welfare and foster care in the south?

What Sociologists Can Tell Us About Serial Killing - Treat Them Better — December 29, 2014

[…] What Sociologists Can Tell Us About Serial Killing […]