How to Lie with Statistics: Stand Your Ground and Gun Deaths

At Junk Charts, Kaiser Fung drew my attention to a graph released by Reuters.  It is so deeply misleading that I loathe to expose your eyeballs to it.  So, I offer you this: 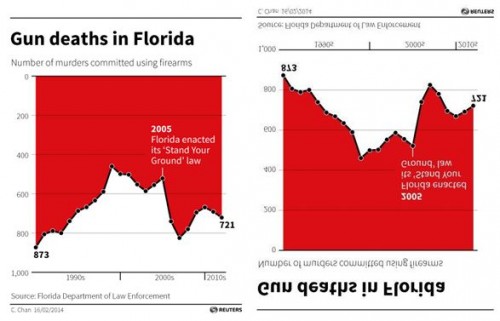 The original figure is on the left.  It counts the number of gun deaths in Florida.  A line rises, bounces a little, reaches a 2nd highest peak labeled “2005, Florida enacted its ‘Stand Your Ground’ law,” and falls precipitously.

What do you see?

Most people see a huge fall-off in the number of gun deaths after Stand Your Ground was passed.  But that’s not what the graph shows.  A quick look at the vertical axis reveals that the gun deaths are counted from top (0) to bottom (800).  The highest peaks are the fewest gun deaths and the lowest ones are the most.  A rise in the line, in other words, reveals a reduction in gun deaths.  The graph on the right — flipped both horizontally and vertically — is more intuitive to most: a rising line reflects a rise in the number of gun deaths and a dropping a drop.

The proper conclusion, then, is that gun deaths skyrocketed after Stand Your Ground was enacted.

This example is a great reminder that we bring our own assumptions to our reading of any illustration of data.  The original graph may have broken convention, making the intuitive read of the image incorrect, but the data is, presumably, sound.  It’s our responsibility, then, to always do our due diligence in absorbing information.  The alternative is to be duped.

It's a misleading image for sure, but it's not a lie or incorrect.

Also, while I have no doubt that the SYG implementation caused more gun deaths - there must have been situations where someone felt threatened and felt they now had a legal right to defend themselves with a gun. I'm sure there are others who acted more nefariously, and plotted to use the law as a shield.

But I'm wary of charts like this that plot a timeline with an inflection point at a given event; there are countless other variables that can influence gun deaths that are not constant over time. You can't prove cause and effect this way.

So I hardly think this is "lying with statistics" (as if that were even possible).

Very misleading. That was deliberate to promote an agenda.

I have another point (I saw the image before and did not see the flipped labels):
The graph is promoted as "Gun deaths" but the numbers shown are murders. But if "stand your ground" is in act then in fact a gun death ist NOT a murder! So it's quite astonishing that the number rose instead of dropped (as all the previous gun deaths labled as "murder" woud now not be counted as "murder").
Also, I have absolutely no idea what happend to the number of citizens in florida, anybody has any clue wether they rose or sunk dramatically? It should have been gun deaths/x citizens to be a meaningful graph.

tl;dr
1. it's murders not gun deaths
2. it's absolute and not number of citizens-corrected

Well, that goes beyond sneaky. Also, what was going on in the mid-90s?

It was clearly a mistake by the chart's designer: You can see that they tried to create a "dripping blood" effect but reversing the Y axis was just stupid. Ironically it turns the desired message on its head. You could say it was a kind of propaganda but with the opposite intention. Nevertheless, it failed. Don't mess with charts too much.

Not only is the chart inverted, but the numbers are also wrong (add 400 to each value to get into the actual range). See true chart here: http://www.fdle.state.fl.us/content/fsac/menu/crime-trends/violent-crime.aspx

It is true that there were 248 more murders in 2006 compared to 2005. However, I don't know how Florida defines "murder" in that chart, as they don't have a separate homicide column. The SUBSTANTIAL drop of 663 in forcible sex assaults at the same year might have something to do with the murder rate increase. We don't now whether these statistics comprise of initial reports, where a self defense situation that ends up being confirmed as homicide is registered as murder at the start... or not.

Gun deaths are up. Overall violent crime rate is WAY down. Judge yourself what that means.

In all seriousness, what do you expect from this bunch...?

As soon as I saw it, I thought "that is the worst graph I've ever seen"

Apparently it was not deliberate; the designer tweeted that her inspiration was a 2011 chart on Iraq War deaths from the South China Morning Post, which uses an inverted y-axis to chilling effect (http://www.visualisingdata.com/blog/wp-content/uploads/2013/04/IRAQ.jpg). The problem is that the Iraq chart contains multiple cues about how the chart works that are lacking in the Florida chart, beginning with the title ("Iraq's bloody toll"), the placement of the x-axis at the top, making it a bar instead of a line/area graph (which makes it easier to understand that the red is "dripping"), the presence of totals within the red, and the simple fact that there is more white than red, which makes it easier to tell that the white is the background (further helped by it being filled with additional information). So it seems less a matter of intentional deceit (at least on the designer's part) and more one of poor execution.

In research, we only use below the horizontal axis points if there are negative numbers, not positive!
That graph isn't intuitive on purpose, as it makes no sense to present that data with such representation. It's more than obvious that they tried to trick people.

For those wondering about sources, the data (as far as I can tell) come from FDLE's Uniform Crime Reports (recent ones available from http://www.fdle.state.fl.us/Content/FSAC/UCR/UCR-Home.aspx ).

For UCR purposes, murder is "the willful (nonnegligent) killing of one human being by another" (see http://www.fbi.gov/about-us/cjis/ucr/crime-in-the-u.s/2010/crime-in-the-u.s.-2010/violent-crime/murdermain ). This is determined by police investigation without regard for judicial outcomes, meaning that most homicides justified under SYG are still reported as murders. (I say "most" because the UCR definition excludes cases where the victim was determined to be a felon killed either in mid-felony or by a peace officer in the line of duty.)

In the process of legitimately criticizing the graph, you engage in deceptive rhetoric to seemingly push your own agenda. As others rightly point out, the data reports the number of reported gun related murders, not "gun deaths." Also, it's irresponsible to make the suggestion that the SYG law is in any way causally connected with the number of murders, especially considering that the number of murders has risen and fallen since the law was passed. Clearly this shows that there is more at play here than SYG. Lastly, using the word "skyrocketed" is intentionally deceptive, especially when emphasized with italics. There was certainly a dramatic rise in 2005, but it never reached the high reported in what appears to be 1990, and following that one year jump, the trend returned to a more typical year-to-year variation. Considering that the murder rate in the US is still much lower today than it was in the early 1970s, even while gun ownership is high, most states have passed concealed carry permit laws, and SYG is on the books in many states, firearms are not the cause for gun-related crime. I always find it intriguing how social scientists point to cultural, economic, and political factors to explain social problems, but on this one issue, they blame a hunk of metal and plastic.

The first way is actually against science practice. In scientific graphs, zero is always at the base of the Y axis, and to the far left of the X axis.

It should be noted that the original uses of the chart by Christine Chan, at Reuters (where it is no longer present) and at Business Insider (which printed a note and a reversal of the chart to make it more clear) were both sources which explicitly and correctly stated that gun deaths have increased following Stand Your Ground. The articles themselves did not try to argue against the data using the chart to mislead. http://blogs.reuters.com/great-debate/2014/02/13/the-deadly-consequences-of-stand-your-ground-laws/ http://www.businessinsider.com/gun-deaths-in-florida-increased-with-stand-your-ground-2014-2

[…] How to Lie with Statistics: Stand Your Ground and Gun Deaths » Sociological Images […]

Here's another misleading one! Notice the dotted line? To properly follow the information, it should descend and then curve to a horizontal line.

Yes. This is horrible. (But why do you say "flipped both horizontally and vertically"?)

[…] data we present and how it is presented are very important.  Sociological Images posted a particularly terrible example concerning gun death in […]

[…] It looks like the ‘Stand Your Ground’ law resulted in a dip in deaths, but carefully reading the axes and the red makes it clear: it’s a lie. […]