How to Change the World One Shrug at a Time

This is, by far, the best response to inquiries about male -bodied cross-dressing that I have ever heard. If you don’t already love Eddie Izzard, you might now.  Asked why he wears “women’s dresses,” this non-cisgendered man responds, in a nutshell: “I’m not wearing women’s dresses. I’m wearing my dresses. I bought them. They are mine and I’m a man. They are very clearly a man’s dresses.” 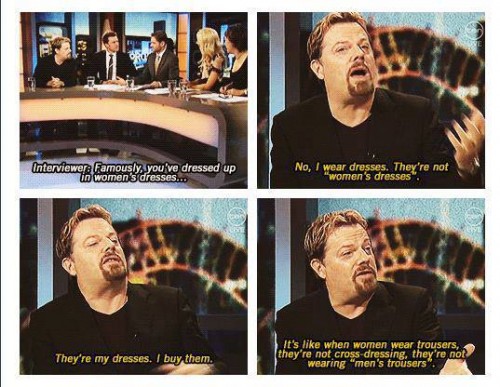 Johnny Depp does a similarly good job of refusing to take the bait in this clip from the Late Show with David Letterman. Letterman queries his rationale for wearing a women’s engagement ring. Depp just plays dumb and ultimately says that it didn’t fit his fiancée, but it did fit him. So… shrug.

The phenomenon of being questioned about one’s performance of gender is called “gender policing.” Generally there are three ways to respond to gender policing: (1) apologize and follow the gender rules, (2) make an excuse for why you’re breaking the rules (which allows you to break them, but still affirms the rules), or (3) do something that suggests that the rules are stupid or wrong.  Only the last one is effective in changing or eradicating norms delimiting how men and women are expected to behave.

In these examples, both Izzard and Depp made the choice to disregard the rules, even when being policed. It seems like a simple thing, but it’s very significant. It’s the best strategy for getting rid of these rules altogether.

Thanks to Dmitriy T.C. for the links!

but some people enjoy the rules and boundaries, and enjoy the identity social performance of gender according to norms gives them.

What of their interests in the benefits they get from the boundaries if the goal is for some kind of "getting rid of the rules all together"?

I always felt silly wearing my academic robes. I would not have done so if my obligation had not been to support my family.

I'm not a huge fan of Izzard - nothing against the guy, just don't find him that funny - but I absolutely love it when he does this. Trans people and crossdressers may not be the same thing, but we certainly get tied together in the popular mindset.

I'm not sure things like this really break down the rules. We expect certain sections of society to be eccentric, comedians, pop stars, actors and what not, we accommodate their gender bending. David Bowie did it 30 years ago, he didn't change a whole lot, although he made some good music.

If it's unusual, somebodies going to pass comment and some people will find it threatening, but today's odd is tomorrows norm. There'll always be a duality because we're all conformists at heart, even when we're being nonconformist, so there'll always be gender rules.

How to Change the World One Shrug at a Time » Sociological Images | Public Philosophy Journal — April 10, 2014

[…] For the full post, see How to Change the World One Shrug at a Time » Sociological Images. […]

You think that whatever happens in today's Western cultural settings is the way things are and should be. http://qr.net/tr4Y

While I agree that Izzard is doing (3) and challenging the rules, Depp is actually doing (2) since he provides an excuse (it didn't fit his fiancee). Granted, that might be the "root cause", in that he wouldn't have thought of wearing it had it fit her correctly in the first place. He even goes as far to say that he's wearing a women's ring, which is the opposite of what Izzard did.

My wife has several shirts she refers to as "man tailored" because they resemble my dress shirts with a formal collar, mostly button down.

Neither of us care that she calls them man tailored.

People do what they want. Going on and on about it is a bore.

It is much more easier for high-status people like Johnny Depp and Eddie Izzard to shrug off such 'gender policing'. They are signaling their status by nonchalantly embracing their non-conformity. Most people cannot afford the social costs of doing so.

I like knowing who's who in the zoo. Androgynous clothing does the opposite.

Depp is clearly doing 2. He doesn't ask Letterman 'why wouldn't I ware this ring?' he instead offers an excuse for why he should.

I love these examples.

People can wear what they want but I atleast need to be able to tell what gender someone is so I can tell whether I can hit on them or not :P There is a practical reason for this people!

Eddie Izzard is a cis man, actually. His assigned gender at birth was male and he continues to identify as male today. Not being cisgender would mean that he was assigned female at birth.

Incredibly well-written article. I need to purchase your book!

That's cute. Except the rest of world does consider clothing to be gendered, because we don't buy into the delusion that is gender equality.

>Don't police me my feelings are hurt!

[…] norms expected of us. How do we change gender norms? Unapologetically break them. Check out “How to Change the World One Shrug at a Time ” at […]

[…] about minors who are not out and who have to deal with transphobia in their schools and homes. An article of clothing itself, as comedian Eddie Izzard comments, is not inherently gendered, though the intent for it to be worn […]