A Proper Entrance: Creole Culture and the Front Door

This photograph is of a Creole home right off the Mississippi river in Louisiana.  It served as the home of two families who ran a sugar cane plantation, starting in 1805. 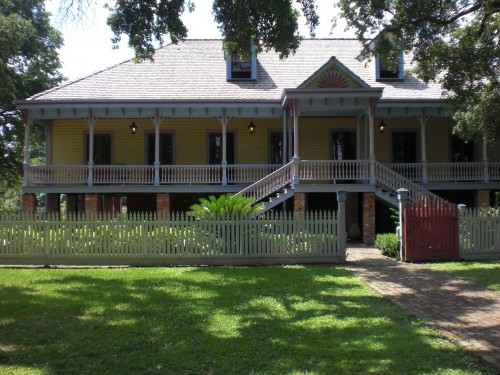 I visited the home as a part of a tour of Laura Plantation and I found one architectural detail particularly interesting.  The tour guide described the two sets of double doors immediately behind the staircase as the “brise” (French for breeze, as the Creole would have spoken French). 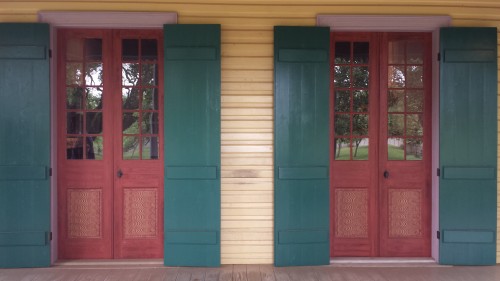 These doors were not for use by people.  They were only to let the breeze in.  They were essentially air ducts, said the tour guide and, to Creole folks, using those doors would have been as odd as entering the house through a window. Instead, according to Creole tradition, visitors were to enter through one of the doors on the far right or left of the house.  These delivered guests to the men’s and women’s quarters: one room with a bedroom, a dresser, and a desk.

All this, of course, was very bizarre to the new Americans of British descent who came to Louisiana to do business.  The front doors of their homes were in the middle of the house and they led to an entryway or reception area.  To them, it would have been very odd indeed to enter the house at one end and even more strange to enter someone’s bedroom.  Moreover, since Laura Plantation was run by women for many years, this meant doing business in a woman boudoir. How scandalous.

This is a great example of the social construction of space. Where is the proper place for a front door? What kind of activities take place in the same room? What rooms/furniture are appropriate for strangers to see? Non-Creoles had to learn how to do business in a new way — perhaps accidentally bungling their entry by knocking at the window — and, ultimately, Laura and the other female presidents of the plantation would have to negotiate their expectations, by separating the bed and office for example. Something as simple as a front door, then, turns out to be a really neat example of social construction and social change.

I love creole architecture, and have visited a few plantations as well - never knew those weren't actual "doors" though. Very interesting!

We live in a beautiful "atrium ranch", 3500+ square feet, plus garage and indoor pool, on an acre of land. No one ever goes through the front door. We all enter through the laundry room. No problem.

[…] On conventions spoken and unspoken; on the elements of living and being that rise up unchallenged when we don’t allow outsiders to examine and respond. […]

I live in a small village in West Sussex, England. Friends come to the back door, and only strangers knock on the front door.