Sure to be a classic!

The tale begins with a baby calf named Rudolph born to what is assumed to be a typical reindeer family.  Immediately we recognize that this is no typical Hollywood tale. As we all know, male reindeer lose their antlers in late fall, but female retain throughout the Christmas season. By making Rudolph, Donner (the head of the family), and all of Santa’s reindeer female, the film makes a strong departure from the androcentric status quo. 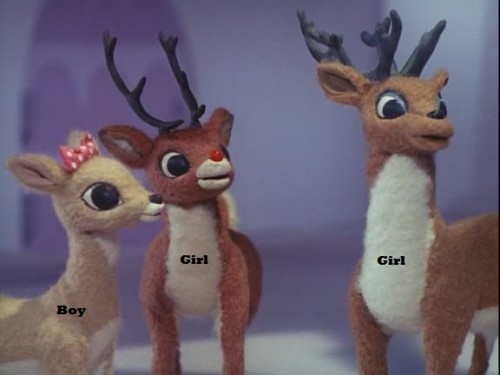 The new baby girl fills the house with joy until the parents discovered the calf to be quite queer—Rudolph had a red nose that glowed. Initially ashamed, Donner drew on a very functional and literal cover-up of mud and clay to hide the nose. It is believed this was for the good of the calf as this story was set in a pretty cruel place—a place where even Santa was unkind and unaccepting of differences.

Spring training comes along with masculinity classes for Rudolph. This was a highlight of the story for me. It was nice to see time was taken to demonstrate that gender is socially constructed and masculinity is learned. Girls can do anything that boys can do and our young protagonist was exceptional, even best in the class.

However, the mud and clay would be an impermanent fix. Rudolph’s glowing nose was revealed during play and the names and bullying began. In fact the bullying was even legitimated by the coach. With such an unaccepting family and community, Rudolph runs away. 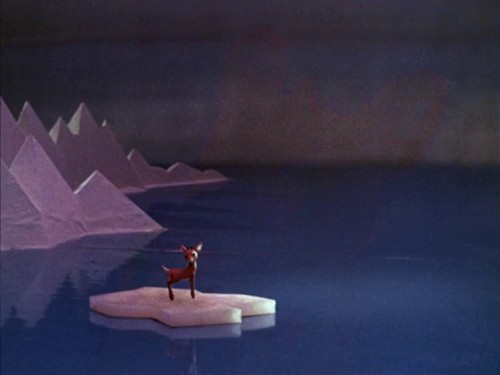 Meanwhile, in (one of) Santa’s workshops, an elf named Hermey was having a Jerry McGuire day. Hermey, perhaps the most relatable character to mainstream American society, was questioning the system. Hermey wanted to do what made him happy. He wanted to be a dentist. Working in an assembly line factory with long hours and no dental was not living the dream. Hermey decides he is a Dentist and also sets out alone.

Unsurprisingly, Rudolph and Hermey run into each other on the path out of town, also called loneliness. After a day in the polar wilderness they meet another queer named Yukon Cornelius who is always in search of gold or silver.

The three misfits then encounter the abominable snow monster. “Mean and nasty,” he “hates everything about Christmas.” Clearly, his teeth and wide reaching claws are designed to compel compliance with the social order.  White, male, and against magic for the masses, this character is clearly intended to represent the kyriarchy, the system meant to uphold the intersecting oppressions of class, race, and gender. The movie’s central challenge is set: smash the kyriarchy.

The group initially retreats, only to find themselves on The Island of Misfit Toys where they are greeted by a flamboyant Charlie-in-the-box. It is here Hermey and Rudolph begin to dream of having an accepting place and we see the strong desire for a community. Surely, if dolls with low esteem, pink fire trucks, and trains with square wheels can be free of oppression, they can too.

Emboldened, the trio now returns to kill the kyriarchy. Using the never fail logic that bacon trumps all meats, Hermey makes like a pig to get the abominable snow monster’s attention. Once the snow monster steps out of the cave, Yukon knocks him out by dropping a boulder on his head; Hermey pulls out all his teeth in a symbolic and literal de-fanging.

Yukon pushes the monster off a cliff, but he falls, too. This is the most symbolic part of the tale, as the group has bonded together to kill the kyriarchy but not without some loss. The message is clear: if we build alliances, we can take down the power elite, but there will be sacrifices.

I will not ruin the end of the tale for you, only to say that Rudolph does in fact save Christmas, but it is by demonstrating value to the man—Santa. Once Santa sees Rudolph and his misfit friends as an asset he de-identifies at least slightly with the kyriarchy. For now, Christmas town was a cheerful place. A small battle had been worn.

Overall, Rudolph the Red Nose Reindeer gets two thumbs up!

It is sure to become a classic tale of systems of oppression and privilege, stigma, and the struggle for self-acceptance. In Rudolph, difference can be good. It was quite progressive with its message advocating inclusivity, alliance, and dissent against systems of power. I love the commentary on the lack of queer community organizing and the role of misfits in fighting capitalism and the power elite. It took on some hot button issues in nuanced ways, especially the policing various classes of citizens and the importance of open carry laws.

It also took some big risks related to casting. It was gender progressive and, outside of the binary, we have at least two characters that blur sex categories. Clarice, for example, presents as feminine and female pronouns are employed with her, yet she has no antlers in late winter. While Hermey dresses like the male elves, but he has swooping blonde hair and a small nose like the female elves.

For years to come, Rudolph will no doubt be a wonderful conversation starter for both awkward and fun winter gatherings alike.

D’Lane R. Compton, PhD is a lover of all things antler, feather, and fur. An associate professor of sociology at the University of New Orleans with a background in social psychology, methodology, and a little bit of demography, they are usually thinking about food, country roads, stigma, queer nooks and places, sneakers and hipster subcultures. You can follow them on twitter.

Another great analysis of this Christmas classic: