Did the Nazis Celebrate Christmas?

Yes, but it was a weird thing you see.

The Nazis were waging war and exterminating Jews.  Meanwhile, Christmas was about celebrating peace and the birth of Jesus, a Jew.

We cannot accept that a German Christmas tree has anything to do with a crib in a manger in Bethlehem.  It is inconceivable for us that Christmas and all its deep soulful content is the product of an oriental religion.

But Germans were largely Christian, so getting rid of Christmas was going to be tricky.  So Hitler turned it into a celebration of the Third Reich.  According to John Brownlee, they re-wrote Christmas carols to extol the virtues of National Socialism.  Mentions of Jesus were replaced with “Savior Führer.”  Since they well understood that Santa wasn’t white, they re-cast the character; he was played by the pagan god Odin.   And they changed the ornaments and placed swastikas atop Christmas trees. 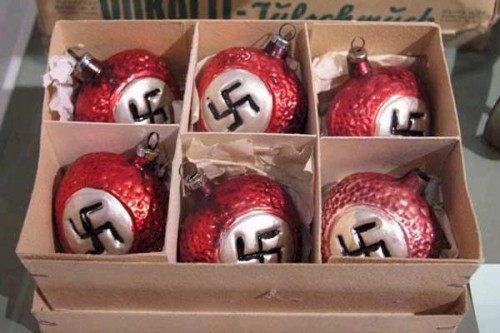 The last Nazi Christmas was in 1944.  Post-war Germany quickly “did with Hitler’s Christmas what they did with every other idea the Nazis had come up with: denounced it…”

This juxtaposition of Nazi values and Christianity certainly does a nice job in highlighting our human ability to embrace contradicting beliefs. This must be wonderful holiday cheer for many who frequent these pages.

But we shouldn't be surprised that politicians can easily convince their citizens, most of whom believe in the supernatural, e.g., "God", that killing others discriminently in fact archives a higher good. Those who willingly drink the poison of irrationally are the most susceptible because they are most often guided in life by compelling stories of the imagination.

Interesting to draw parallels with Eastern European countries under communism after WW2. Eastern Europe was in many way less secular/more Christian than the west at the time, while Communist dictatorships were frowning upon religion as "the opiate of the masses" (and in some cases, as Romania under Ceausescu, as distracting from the personality cult of the Great Leader).

Christmas was of such great importance to the people, that it was not feasible to get rid of it. What Communists did instead was focus on New Years' Eve/try to rebrand it as the main winter celebration; with mixed results (in Romania they were ridiculed for it, in Bosnia where Muslims didn't have much freedom of religion either it sort of worked because it was seen as the "neutral" holiday that both Christians and Muslims observed).