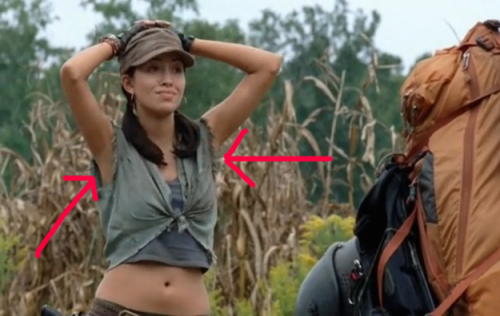 This is also gender ideology at work: the privileging of an idea of gender over real life or, in this case, realism.

If gender ideology had lost this battle with realism, we’d see armpit hair on the women in Gilligan’s Island, Planet of the Apes, The Blue Lagoon, Beauty and the Beast, Waterworld, Lost, and The Hunger Games — but we don’t. (Thanks to Ariane Lange at Buzzfeed for the whole collection and to @uheartdanny for the link.)

At least Rosita could conceivably have a razor. How do women supposedly shave their armpits on deserted islands? Did the Beast slip Belle a razor, you know, just as part of his controlling personality? And maybe some persnickety women would continue to shave even if they were lost in purgatory, but Riley in Alien? Come on. 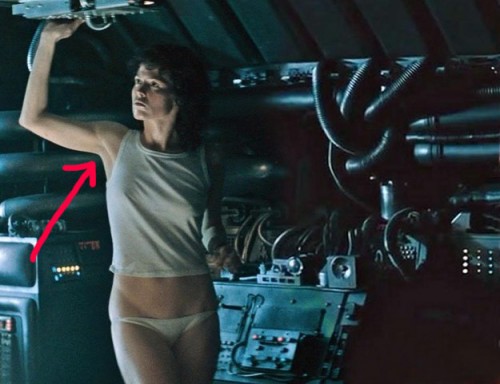 Our interest in realism only goes so far. Armpit hair on women is apparently one of its limits.

In The Hunger Games books Collins made a big deal about how the architects of The Games altered the boys DNA so that they couldnt grow facial hair (to keep them looking poignantly young) and waxed Katniss' legs and armpits against her will. They also wanted to give her post-games breast implants. The rest of the examples you chose are spot-on, but the media enforcing gender roles in really inappropriate situations was a part of Collins' larger point.

Well, in the Walking Dead they seem to have unlimited guns and ammunition so why not razors?

I'll go so far as to add that if the Professor, Gilligan, The Skipper and Mr. Howell could somehow shave every day, Ginger and Mary Ann probably could too. Don't know if Mary Ann *would* but Ginger certainly would. Come on. She wore sequins on a desert island!

Armpits weren't the only thing Ripley shaved off. Let's give her some credit for being an insanely bad-ass warrior for Aliens and Alien3. And a basketball star in Alien: Resurrection.

Not to mention pubic hair. In the Game of Thrones series all the women are perfectly bald from the neck down, even though the show is based on a medieval-type world where women shaving body hair would be considered a ridiculous pastime.

(And in case anyone wants to point out that the show is fantasy and not actually medieval Earth: true, but in the books the show is based on, every naked woman is described as having a prominent pubic bush. So.)

If we're strictly talking about in-world fictions, Lost established that they do have access to shaving razors.

I wouldn't discount peoples' attachment to norms, even in forsaken-by-humanity scenarios. It really boils down to a character-by-character basis on this one.

Same goes for eyebrows. No matter the age they're in or the state of the world they live in, no woman on film seems able to stop pluckin'

So... corpses walking round like are alive, um.. pretty realistic, but a clean shaven armpit, UNPOSSIBLE!

Look, every work of fiction takes place in a universe that is not ours. Expecting them to be like ours is pointless.

Also hair dye. For example on Orange is the New Black Piper always has no roots and nice highlights even after several months in jail. I know I have to go at least ever 7 weeks to keep up a decent dye/highlight so my roots don't show.

"but Riley in Alien?" You mean "Ripley". ;P
I agree with your article, regardless of the simple misspelling of an iconic, movie heroine's name. ;]

Riley? I'll assume that's a typo. But I don't see the issue in Ripley having shaved armpits. Several of the men in the Nostromo crew have shaved faces, so they clearly do shave in space. They haven't been fighting the alien for more than a day or two, so not much more hair would have grown during the crisis. I agree with the overall point of the article, but I don't see this one as being a problem.

Alien takes place over a short timeframe of a couple or a few days. If the men didn't all grow beards in suspended animation, I suppose Ripley wouldn't have grown pit hair either. So she could have started clean shaven and fought the alien with only minor stubble. So that particular example may not be the best.

Not disagreeing with the premise of this post. But it would be good to choose the examples with a better consideration of the context. (Also, didn't the Professor on Gilligan's Island make coconuts and shells into **anything**? The men stayed clean shaven too, you know!)

I love it when people take fiction seriously.

I think everyone is missing a huge point. These actresses have lives offscreen and the importance of keeping armpit hair to shoot a scene for TV is probably less than their own grooming preferance. The majority of women aren't fans of having armpit hair so they probably just shave because of that, not because the producer is enforcing ideologies on gender roles.

I think the issue of controlling for armpit hair probably never entered the directors' minds so the actresses are free to shave as they damn well please. They usually only control for obvious things like hairstyle and tattoos. You guys are all taking armpit hair too seriously.

Not everything is about gender, sometimes it's about friggin' evolution, human and/or cultural. Hair makes armpits smell. We don't like body odour. Unless if we do, in which case we could just as well go back to living in caves. Aesthetics also change. There will always be beauty standards and they will keep changing, and oppressive as that may be more than often, everyone should wake up and realize they don t have to blindly follow the "rules", and most importantly, realize that there are actually many people not giving a damn about those rules.
Shall we get over it?
Shall we focus our "resisting powers" to things like, say, direct political manipulation? You cannot control the market and its ways, but you can control your purchasing choices, and your vote.
PS. If we really wanted 24/7 reality, cinema and fiction movies wouldn t exist, we would only watch documentaries.

A recent episode of South Park had a plotline that might answer the questions posed here, in which a spy video of "Craig's mom's bush" becomes an internet sensation. She's angered at the invasion of privacy, but the community collectively expects her to be more ashamed of her natural body hair.

I'd hazard a guess that the actresses on shows like "The Walking Dead" would rather not have their natural armpit hair go viral in a Buzzfeed montage. Additionally, many of them are probably concurrently shooting other productions in which they are expected to uphold the fiction of the hairless woman.

Which is all to say, there's always a cost to going against the grain, but there's not always a benefit. It's hard to fault an up-and-coming actress for examining the risk of being the pioneer for female body hair in current television, and deciding that it's just not worth it. But if "The Walking Dead" somehow decides to cast Amanda Palmer, I trust she won't be seen raiding a zombie-infested Walgreens for a lady shaver.

It seems reasonable and possible that the actresses shave their armpits or their legs as part of their self-elected daily hygeine/beauty routine. Although this routine may still be based on a beauty standard absorbed through patriarchal western advertising or whatever post-structural jargon you want to use, it seems fair to say that ultimately it's the choice of the actress. None of the characters on this show have garishly long fingernails, or dandruff. And I doubt these directors stop making their actors and actresses apply moisturizer or use shampoo. You almost seem to be endorsing a director who makes women forgo their personal comfort to make his movie better.

Even the men in the Walking Dead, Lt. Grimes and Daryl, maintain GQ-level facial hair grooming throughout the apocalypse. You do feminism a disservice when you take issue with prime time television shows which are stupid and not worth attention anyway.

Some women are just naturally hairless! I just need a pair of tweezers and a small blade for trimming. Go my asian genetics!!!

In a crisis situation it's perfectly possible that people attempt to hold on to some semblance of ontological security by maintaining the every day routines of life and the reproduction of their identities, including arguably self-repressive bodily practices such as gender-specific depilation and shaving. It's not therefore necessarily unrealistic for the protagonists to be keeping going with these routines, it's part of the psychology of coping with extreme stress.

Several people have commented that actresses probably prefer to remain hairless under their armpits - and, of course, some of them will have used more permanent mechanisms for removing the hair than shaving, which would mean taking weeks or months to regrow the hair for realism

But what this omits is that there are such things as armpit merkins, which could be worn as part of the costume. There would certainly be no obligation on the actresses to make changes to their appearance outside of work-time.

I'm a heterosexual male and I shave my armpits. What does that say about me?

[…] do women in apocalyptic fiction have shaved […]

The same observation could be applied to men's facial hair in many of these kinds of stories. Men's facial hair tends to stay groomed in-line with current standards, with some men's faces remaining as clean-shaven as the women's armpits. You never see the lead actors with a patchy beard, or one that has grown long, unruly and matted.

Apparently female heroines have time to shave during an apocalypse | floweren — December 19, 2014

[…] From the Sociological Images article “WOMEN IN APOCALYPTIC FICTION SHAVING THEIR ARMPITS.” […]

[…] can apply lipsticks which have a pink tone, as pink-toned lips go very well with red hair. For red-haired women some of the best and well suited colors are peach, coral. Those which are raisin […]

[…] edits out the day-to-day (or month-to-month) challenges women face. TV programs such as The Walking Dead – a series about a zombie apocalypse where women who haven’t showered in weeks manage […]

[…] control over women’s bodies. Beauty standards created to make women feel ashamed of their body. Another article, taking a lighter approach, pointed out the impractical depiction of women’s shaved bodies in […]

this is a silly argument. As a woman, regardless of where i am, if i am able to bathe i will, if i am able to shave mai armpits i will. It has nothing to do with gender ideology - i am a lesbian and i wax because i simply LIKE being smooth. Body hair collects germs and causes body odors. In the movie Alien, the character Ellen Ripley certainly had access to personal grooming supplies, in The Walking Dead, Rosita Espinosa has access to abandoned houses, shopping malls - she would have no trouble creating a toiletry kit for her self and if she WANTED to shave under her arms she would. Gender roles are NOT defined by body hair or the lack of it.

[…] Our interest in realism only goes so far. Armpit hair on women is apparently one of its limits. https://thesocietypages.org/socimages/2014/12/09/gender-ideology-vs-realism-the-armpit-hair-edition/ [category: Aust, […]

all of the idiots in the comments don’t realize how dehumanizing it is to see every female character serve no other purpose than looking good and being a sex object or vice versa become a typical empowered woman sterotype, can’t we just have real women being normal human beings?