Chart of the Week: Rich Kids More Likely to be Working for Dad

A new paper by Martha Stinson and Christopher Wignall found that 9.6% of working-age men were working for their dad in 2010. The likelihood of nepotistic opportunism was related to class, generally climbing with the father’s income. 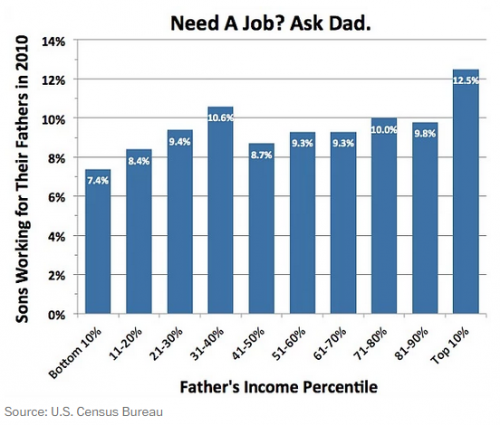 This is just a “snapshot,” writes Matt O’Brien for The Washington Post. It’s just one year. If we consider whether men have ever worked for their dads, the numbers get much higher. More than a quarter of men spend at least some time working for the same company as their fathers before their 30th birthday. O’Brien also cites a study by economist Miles Corak revealing that 70% of sons of the 1% in Canada have worked at the same place as their dad.

As O’Brien says: “The easiest way to get your foot in the door is for your dad to hold it open for you.”

Well, I am a rich kid daughter, but I did work a minimum wage summer job at my Dad's latex rubber product workplace, specifically being a go-fer / bottle washer / solution maker for the quality assurance / chemistry lab . I still remember running up and down the assembly line measuring and recording specific gravities of solutions. My older brother worked a more-than-minimum-wage assembly line summer job there as well. I also worked at the local amusement park, which employed thousands of youth - no connections there, but still this was a middle class or white kids' job because the amusement park was some 25 miles from the city, and one had to join a carpool to get there, no public transportation available.

What's next on your hit list? Mom? Apple pie?

No idea whether it's likely to be a real feature of the distribution, or just statistical noise, but the bimodality is interesting: peaks at 31-40% and 90-100%.

It may rise because with a higher income, more dads have a business that can hire employees?

I don't find this graphic that compelling as a measure of lack of mobility. How much of an effect does this have on inequality? How many non-family members are being kept out of a job by the bosses' son?

It will be interesting to see how much of the economic inequality is based on merit, and how much on factors such as these.
Also, do they have similar data on fathers (or mothers) and daughters? Also, do they have a breakdown by job type? It's one thing to do a minimum wage job as a young adult in your parent's business (as NancyP below), but another to make a career out of it.

[…] his fault?); as long as we’re on the topic of the President, a couple immigration items; life chances; it’s good to be king CEO; not so good to be an average worker; even worse to be in prison; […]

When I was in college, my dad's place of business offered a paid summer internship in their accounts receivable department. You had to be related to a current employee to qualify -- it was myself, my brother, and another woman (who she was related to has been lost to the sands of time).

We did all of the tasks associated with an entry level accounting clerk -- posting payments, re-conciliating issues with bank statements, tracking down bad addresses. All things that provide a resume advantage to anyone interested in a career in accounting....though all three ended up choosing other career fields.
What the study is saying is that the more money Dad makes, the more opportunities like mine are available to his children.

Likewise, the less that Dad makes, the less opportunities are available to his children.

[…] Chart of the Week: Rich Kids More Likely to be Working for Dad » Sociological Images […]