First, there were the accolades. More than 100 instances of street harassment in a two minute video, testifying powerfully to the routine invasion of women’s lives by male strangers.

Our instructor is sociologist Zeynep Tufekci, writing at The Message. Our competing hypotheses are three:

1. Black men really do catcall more than other kinds of men.

2. The people who made this video are unconsciously or consciously racist, editing out men of other races.

3. The study was badly designed.

As Tufekci points out, any one of these could account for why so many of the catcallers were black. Likewise, all three could be at play at once.

Moore and his colleagues looked for landmarks in the video in order to place every instance of harassment on the map of New York City. According to their analysis, over half of the harassment occurs on just one street — 125th — in Harlem. 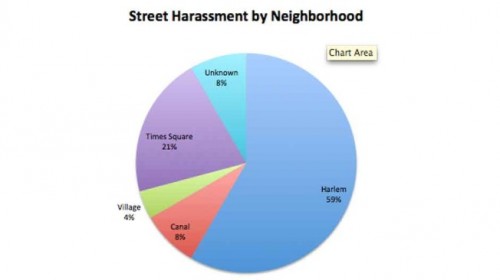 Did the time the producers spent in Harlem involve denser rates of harassment, supporting hypothesis #1. Did they spend an extra amount of time in Harlem because they have something against black men? That’d be hypothesis #2. Or is it hypothesis #3: they were thoughtless about their decisions as to where they would do their filming.

Honestly, it’s hard to say without more data, such as knowing how much time they spent in each neighborhood and in neighborhoods not represented in the video. But if it’s true that they failed to sample the streets of New York City in any meaningful way — and I suspect it is — then hypothesis #3 explains at least some of why black men are over-represented.

And that fact should motivate us all to do our methods right. If we don’t, we may end up offering accidental and fallacious support to ideas that we loathe.

How interesting, that the video has become so ubiquitous that it doesn't even need to be named or linked.

It's important to recognize that, whatever its methods, the video was an advertisement, and not a research study. Its "results" are heavily manipulated by necessity - editing 10 supposed hours of footage down to a representative sample of encounters would have resulted in something that had nothing to do with the original point at all. And we don't really know to what extent the setup was manipulated to obtain the desired results - only that, for its purposes, the catcalls were clearly the desired results.

For a different set of data on street harassment in New York, check out Hollaback NYC's map of reported incidents. At a glance, it looks like the highest density is in South Manhattan, which could suggest some sampling problems with the video. On the other hand, Hollaback's data is anonymous, voluntary self-reporting, so it's probably biased in different ways. Anyway, it's an interesting comparison. http://nyc.ihollaback.org/

So people having at least some education on scientific methods really believed this video could be used as representative data for research?

I can attest that in the very ethnically diverse American city where I live, black men appear to catcall much more than other groups. I'm told that it's a "black culture" thing, but what I see suggests that (like many things in this country that are associated with race) it has more to do with class culture.

Sociology/Anthropology In the News! | soanstolaf — November 18, 2014

The video simply claims to show the ubiquity of street harassment in a major US city, which it succeeds in doing. It does not claim to show a representative sample of harassers by race, class, age etc. nor should it be required to do so (other than to avoid consciously manipulating the results to present a biased view).

So there's a video designed to show that men are uncouth, sexist pigs. It does that. No questions need be asked. But, hang on, it suggests that black men might be worse than white men. Quick, call in the methodological critiques, something must be wrong.

so your suspicion that their sample was bad is now a fact? please, don't bother posting about quantitative data if you're going to pass off your opinion as truth.

Meh, only men found this video interesting. Women go through this stuff daily and who catcalls you really depends on where you are walking.

Thank you for sharing very nice from you I just want to suggest that kinemaster pro apk download is also extremely professional video editing software for phones.