Voters are Reasonably Disappointed in the Democratic Party

Electing Republicans will certainly not improve things, but it is hard to blame people for feeling that the Democratic Party has abandoned them.

President Obama had hoped that recent signs of economic strength would benefit Democrats in the recently completed election.  Job creation has picked up, the unemployment rate is falling, and growth is stronger. Yet, most Americans have not enjoyed any real gains during this so-called expansionary period.

The following two charts highlight this on the national level.  The first shows how income gains made during the expansion period have been divided between the top 1% and everyone else.   There is not a lot to say except that there is not a lot of sharing going on. 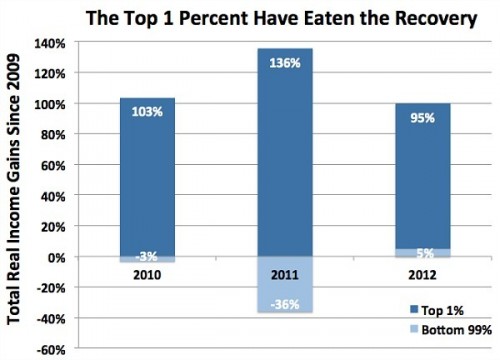 The second shows trends in real median household net worth.  While declines in median net worth are not surprising in a recession, what is noteworthy is that median net worth has continued to decline during this expansion.  Adjusted for inflation the average household is poorer now than in 1989. 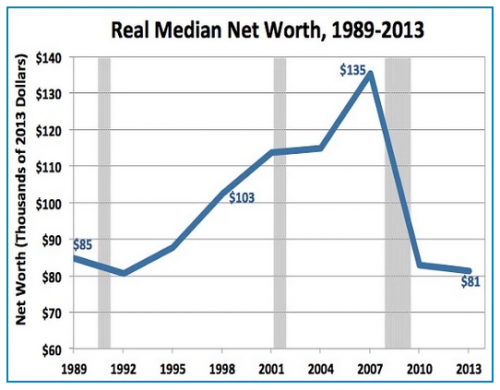 Oregon provides a good example of state trends.  The chart below shows that the poverty rate in Oregon is actually higher now than it was during the recession. 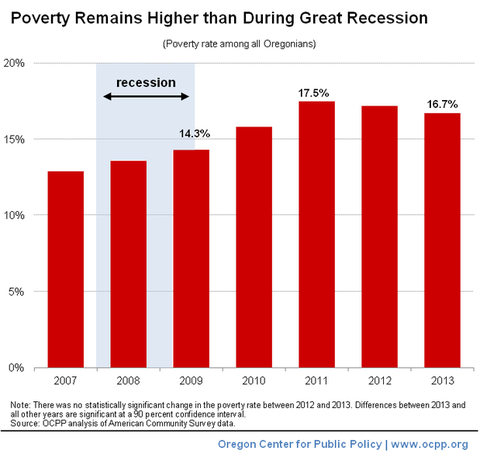 The poverty rate for children is even higher. In 2013, 21.6 percent of all Oregon children lived in families in poverty. 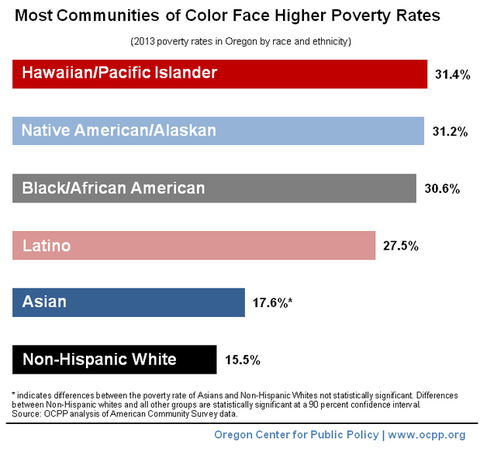 More promising is movement building to directly advance community interests.  One example: voters in five states passed measures to boost minimum wages.   Another was the successful effort in Richmond, California to elect progressives to the city council over candidates heavily supported by Chevron, which hoped to dominate the council and overcome popular opposition to its environmental and health and safety policies.

Originally posted at Reports from the Economic Front. Cross-posted at Pacific Standard.

1. Recessions resulting from a financial collapse take a decade or more to fully correct. To say some things are better while many people have not benefitted states the obvious: We're not out of the hole yet. Blaming the Democrats for that is like blaming mom when the cake isn't done.

2. Of course the income gains went to the top 1%. They had the money and doubled down on the market, which hit a recession low around 6600 and is now above 17500. That kind of win make big bucks. That performance will not be repeated until the middle class rises and starts spending again. (See #1 re: timeframe.)

3. Net worth is down for average Americans because they were never good at saving, do not invest in stocks, and their homes lost value. Homes are appreciating and that will help a little in the short term.

4. The % of children living in poverty is almost always higher than the population average. Their parents are obviously young and make less than other workers. We've talked about this already.

5. Boosting minimum wages for more service jobs is indeed a boost, not just to the workers but to the economy overall. As much as the world hates famous American over-consumpsion, we all benefit financially from it. When the middle class starts rising BUY THE DOW!