Egg Freezing Isn’t the Feminist Issue You Think It Is

We recently got the news that Apple and Facebook were going to offer women egg freezing as a fringe benefit of employment.  The internet exploded with concerns that the practice discouraged women from becoming mothers at a “natural” age, either by offering an alternative or by sending a not-so-subtle message that childbearing would hurt their careers.

I wasn’t so sure.

First of all, it didn’t seem to me that these women were likely to delay their childbearing till, say, after retirement. So what did it matter to these companies if they had kids at 33 or 43?  If anything, an employee taken out of commission at 43 would be even a greater loss, since they’d accumulated more expertise and pulled a higher salary during maternity leave.

Second of all, the discussion seemed to assume that every 30-something female employee was in a happy and stable marriage to a man. The possibility that some women were 30-something and single — that freezing their eggs had nothing to do with their jobs and everything to do with a dearth of marriageable men — didn’t seem to enter into the equation. To me, that seemed like quite the oversight.

So, I was grateful when sociologists Tristan Bridges and Melody Boyd intervened in this debate. They found actual real data on why women choose “oocyte cryopreservation” and the big answer is not related to their job. As my never-married, 40-year-old self suspected, it was “lack of partner” 88% of the time. 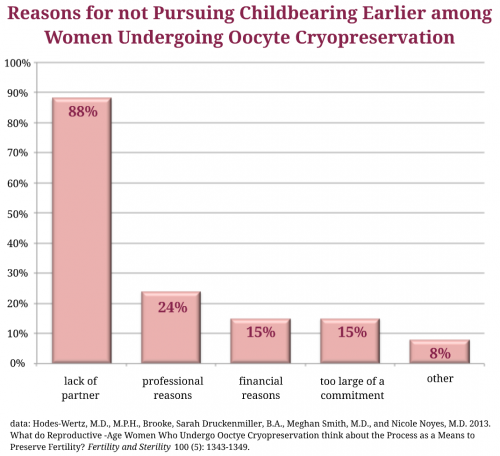 Bridges and Boyd are working on an article re-thinking what it means for women to enter a market full of “unmarriageable men.” In the past, it was mostly working class and poor women who didn’t marry, in part because so few men of their own social status had stable enough employment to contribute to a household. Today women of other class backgrounds are also forgoing marriage, but it isn’t because the men around them don’t make money.

“Men who might be capable of financially providing,” they write, “are not necessarily all women want out of a relationship today.” Women of all classes increasingly want equality, but research shows that many men agree in principle, but fall back on traditional roles in practice.

Freezing one’s eggs is a feminist issue, but not the one that so captivated us a couple weeks ago. It seems to me that Apple and Facebook are simply offering this option as part of a benefits arms race. From that point of view, it’s about class and the widening gap between the rich and everyone else. When women choose this option, though, it’s likely because the gender revolution has stalled. Women have changed; men aren’t keeping up.  In the meantime, ladies aren’t settling, even if they’re holding out hope.

They also marry latter and it is possible that the egg freezing is a benefit to those who anticipate a later marriage.

I think this article falls into the same trap about "choice" as those who misunderstand gender inequality. Yes 88% say that the lack of a partner was a reason to freeze their eggs. But should we interpret this as purely women being picky and not settling? I'm not so sure. I wonder whether some of those other considerations (professional reasons, financial reasons) might be the distal factors that structure access to a marriageable partner, the more proximal factor. Lack of a partner would be the clear answer for why most people didn't have children sooner, even if other (feminist-relevant) issues helped to contribute to that lack of a partner.

Obviously the data doesn't reflect women freezing their eggs because they felt pressured to do so by their employers - the phenomenon of employers offering this to women employees is brand new. This data should be collected years from now if it's to reflect the reality of whether or not this employer provision coerces women into egg freezing. It also takes a rather ludicrously charitable view of corporations to presume that these companies are offering egg freezing to employees because they understand how hard it is to find a desirable husband and they simply want to help their female employees build the romantic lives they truly want. There's no evidence (I'm aware of) that suggests that employers are motivated to provide pay or perks to employees for such self-disinterested reasons.

SO TRUE! " Women of all classes increasingly want equality, but research shows that many men agree in principle, but fall back on traditional roles in practice." I'm 42 and have never been married for this EXACT reason.

Every man I find wants to be the boss and wants the woman to become docile. They want to look at other women, be the king of the household, put their needs first, while the women puts up with his bad behavior and defers her own needs just so he can rise in the world. Of course not at first, but every man I've ever met does this in the end. They don't get it! They really think women are going to cave and live like their grandmothers.

There is a large and tiring population out there who instinctively impune the motives of businesses at every turn and for the most part they can be ignored.

I think this is the real story: "It seems to me that Apple and Facebook are simply offering this option as part of a benefits arms race. From that point of view, it’s about class and the widening gap between the rich and everyone else." Yes. The idea that somehow Apple and Facebook WANT women to freeze their eggs really doesn't make any sense - as you point out above; the logic doesn't hold up. Benefit arms race is the perfect description and accurately describes the way wealthy Silicon Valley companies compete with one another for talent. The second sentence I quoted is what really interests me: the options and life choices available to some and unattainable by others in an increasingly economically unbalanced society.

EGG FREEZING ISN’T THE FEMINIST ISSUE YOU THINK IT IS | RetrieveFreezeRelax.com — November 11, 2014

[…] do so because they don’t have a partner, NOT because they’re career-obsessed.  Click here to read […]

Speaking as someone who actually works in the industry, I agree that if I had to pick *one* reason why I haven't had kids yet, it would be because I don't have a suitable partner. But that doesn't mean there's no pressure to delay children coming from my job. This is absolutely a sign of these companies' disrespect for work-life balance and (yet another) crystal-clear signal to those of us who work here that if we want to have time for our families, we don't belong in those offices.

[…] More on egg freezing and why it’s not an issue feminists should be championing, by Lisa Wade at Sociological Images. […]

Another clueless article about gender which completely ignores the fact that women still saddle men with their expectations of traditional masculinity, in courtship and beyond. I wonder how long it is before all these "unmarriagable" men find a demagogue who gives them an excuse to smash a failed society to which they longer have any meaningful relationship.

I find it interesting that the increase in educated working women has resulted in an increase in unsuitable partners. Perhaps the family of the 50s/60s we saw is still what is instilled in us, but the prospect of money is the conflict women are trying to juggle... http://www.brookings.edu/blogs/social-mobility-memos/posts/2014/10/08-marriageability-employment-childbearing-sawhill

[…] Cross-posted with permission from The Society Pages. To view the original piece, click here. […]

Women still expect a guy to make as much if not more than them, even while they compete with men for the same jobs and drive their wages down. That is why clueless women can't find a "suitable partner." This isn't rocket science. Gee, maybe it's time to stop condescending to men, demonizing them, and asking them to accommodate women and start asking women to reevaluate their bigoted attitudes, juvenile romantic fantasies, and expectations which are rooted in a 20th century characterized by pensioned, stable employment and mass consumer culture, a world which no longer exists.

It seems like feminism has morphed into "parentism" where everybody assumes that what moms want is what all women need and that isn't the case.

Is the optimum choice to deal with https://showbox.run/ such issues. Next time you miss out on your TV program or movie

that movie you wanted to see for a v https://dltutuapp.com/tutuapp-download/ while, there is no reason to lose heart

If you are busy when your favorite https://kodi.software/ TV show is being telecast or you could not watch