Length of the Workweek in International Perspective

Iceland continues to experiment with new ways to promote majority living standards. According to the Icelandic Grapevine, a bill has been submitted to the Icelandic parliament that would shorten the workweek.  More specifically, it would change the definition of a full time workweek to 35 hours instead of the current 40 and the full workday to 7 hours rather than the current 8.

As the Grapevine reports:

The bill points out that other countries which have shorter full time work weeks, such as Denmark, Spain, Belgium, Holland and Norway, actually experience higher levels of productivity. At the same time, Iceland ranked poorly in a recent OECD report on the balance between work and rest, with Iceland coming out in 27th place out of 36 countries.

The bill also points out that a recent Swedish initiative to shorten the full time work day to six hours has been going well, with some Icelanders calling for the idea to be taken up here. In addition, the bill also cites gender studies expert Thomas Brorsen Smidt’s proposal to shorten it even further, to four hours.

There is certainly significant variation among countries in the length of the workweek, as the following information from the U.S. Bureau of Labor Statistics shows: 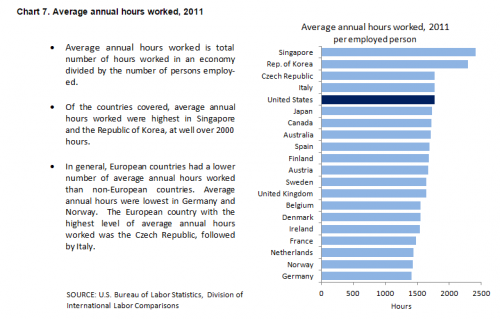 In 2011 the average annual hours worked per employed person in the U.S. was 1758.  The number for French workers was 1476.  It was 1411 for German workers.  Assuming a 40 hour workweek, the average U.S. worker had a work year more than two months longer than the average German worker.  It is also worth noting that while all the countries that reported data for the entire period 1979 to 2011 showed reductions in work time, the reduction was the smallest in the U.S.

Although it is not easy to establish a clear relationship between work hours and productivity, there is reason to believe that the relationship may be inverse.  In other words, the shorter the workweek the more productive we are. It would certainly be nice, for many reasons, if someone in the U.S. Congress followed the lead of Iceland and introduced  a bill to reduce work time in the U.S.

Not sure why folks in the US feel its so necessary to compare ourselves to European countries. Over time I for one see less and less to like about those people as models for our behavior. I also don't believe the EU has higher worker productivity than the US.

Compared to the exciting and vibrant economies in Hong Kong, Korea and Singapore--more to my liking if you really need the comfort of comparisons--the US is a land of easy-riders, working 1750 hours per year to their average of 2300.

Finally, actually hoping the "US Congress"--who've proved to be incapable of governing now for decades and who have no set workweek at all--will pass more legislation about work habits seems like a death wish to me. Let them keep fighting and leave us alone!

Do they count desk-warming time in this study? There may be countries on top of this chart where people stay longer at the office but are not being productive enough for the time as a lot of time is wasted through desk-warming. Just saying.

Nice in theory, but what happens to compensation in these cases? If you're already having a hard time making ends meet by working a huge amount of hours, having your pay go down with the hours isn't going to help.

[…] more hours per year than those of any other country besides Singapore in 2011, according to the US Bureau of Labor Statistics. Honestly, I was no stranger to hard work before arriving — after all, I’m a strange […]

[…] more hours per year than those of any other country besides Singapore in 2011, according to the US Bureau of Labor Statistics. Honestly, I was no stranger to hard work before arriving but I’ve been given a run for my […]