Did the Secret Service Director Get Pushed Off the Glass Cliff? 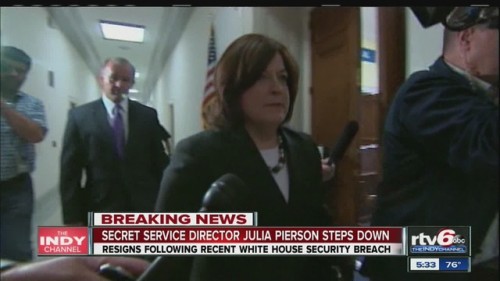 When Julia Pierson’s name first appeared in national headlines last year, it must have sounded like a perfect solution. President Obama appointed Pierson as the nation’s first female Director of the Secret Service following the aftermath of an embarrassing scandal in which several agents hired prostitutes on a presidential trip to Columbia. Many saw Pierson as uniquely positioned to purge the organization of its hyper-masculine culture and revive its good name.

After an intruder succeeded in running across the lawn and into the East Room of the White House, however, a firestorm of criticism prompted Pierson’s resignation. Writing in the New Republic, Bryce Covert suggests that the very gendered conditions of Pierson’s hire preconfigured her administration’s failure from the start. Such is the unfortunate case, he argues, for a large number of women in leadership roles:

As with Pierson, women are often put in these positions because rough patches make people think they need to shake things up and try something new—like putting a woman in charge. When it’s smooth sailing, on the other hand, men get to maintain control of the steering wheel. Women are also thought to have qualities associated with cleaning up messes.

Covert builds his case on a wealth of research exploring the risks that await women at the top of the corporate world:

Multiple studies have found that women are most likely to be given a chance at top roles in the corporate world when things are already bad. One found that before a woman took over as CEO of a Fortune 500 company between 1996 and 2010, its previous performance was significantly negative. Another found that FTSE 100 companies who appointed women to their boards were more likely to have had five months of consistently bad performance compared to those who picked men. Another found that companies were most likely to choose women for their boards after a loss that signaled the company was underperforming. Even in a lab, students and business leaders are more likely to pick a woman to lead a hypothetical organization when performance is on the decline.

Looking for more on the barriers facing women in positions of power? Our own Anne Kaduk shows “There’s Research on That!”

Matt Gunther is a new contributor to The Society Pages, where he co-edits and produces the Office Hours podcast. He’s a second year graduate student studying sociology at the University of Minnesota. His research deals mainly with cultural politics in the global food system.

Cross-posted at Citings & Sightings. Photos by Charlotte Morrall via Flickr CC and at indychannel.

Please. My 6-year old Shepherd won't let anyone on "his" lawn he doesn't know. Why can't a couple million dollars of trained talent do that?

The Secret Service is a national embarrassment and a second-rate operation, and Pierson didn't fix it--or at least didn't fix it in time to save herself from the crash of the political machine.

Philosopher-social critic-"journalist" types like Bruce Covert writing articles like this for papers like the New Republic make me laugh. They sell mind games to the faithful and related wing-nuts who want to believe everyone's got a specific ulterior motive.

Pierson is out of there because the operation is a failure and politicians on the right had the power to force the issue to embarrass the administration. Period.

Bryce Covert is a woman.

Thinking that women are better problem solvers than men is sexist.