Racial Minorities Have to Wait Longer at the Polls

Compared to other democracies, the U.S. has a strange penchant for passing laws that suppress voting instead of encourage it.  We are one of the few democracies, for example, that requires people to register to vote.  Most elsewhere, writes Eric Black for the Minnesota Post:

[G]overnments know the names, ages and addresses of most of its citizens and… provide the appropriate polling place with a list of those qualified to vote. The voter just has to show up.

We also hold elections on just one day instead of several and that day is an otherwise normal Tuesday instead of a weekend or a holiday.

Those are just two examples of rules and practices that reduce voting. There are many. It’s called voter suppression and it’s totally a thing. The ACLU has collected voter suppression efforts just since 2013, listing 15 states that have passed such measures.

A majority of these efforts to reduce voting are initiated by the political right, as a generic search for such stories quickly reveals. They are aimed specifically at likely democratic voters, like racial minorities and students, adding up to what political scientist David Schultz argues is the Second Great Disenfranchisement in U.S. history after Jim Crow.

Many of these measures are overtly discriminatory and even illegal, but others are more subtle. Making voting more costly in terms of time might be one subtle way of discouraging voting by some types of people. Data collected by the Cooperative Congressional Election Study in 2012 suggests that this is, indeed, part of voter suppression, by incompetence or design.

Here is some of their data, as organized by Mother Jones. Nationwide, the average wait time to vote was longer for all non-white groups, especially blacks: 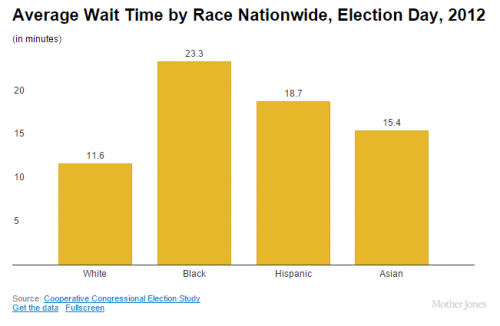 Florida had the longest delays in 2012 and these delays disproportionately affected Latinos: 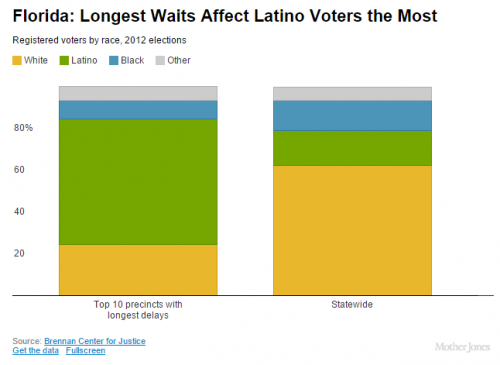 In South Carolina, the 10 precincts with the longest wait times were all in one disproportionately African American county: 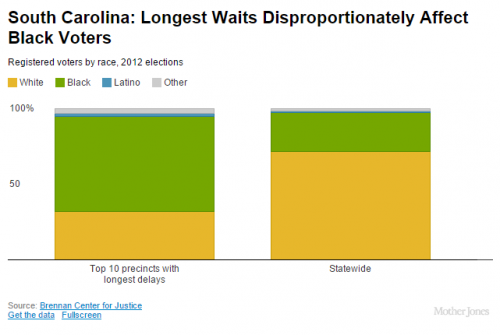 Wait times are partly the result of the number of voting machines divided by the number of registered voters. The long wait times in South Carolina, in other words, were not random. Those 10 precincts in the highly African American county had about half as many voting machines per person as the statewide average: 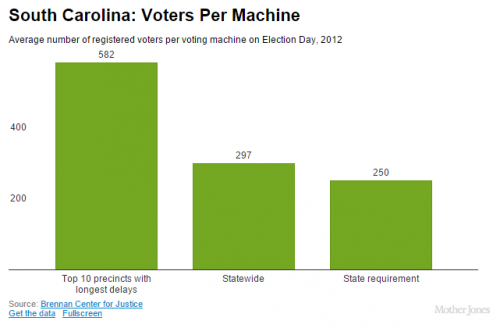 They also had significantly fewer poll workers available to help out: 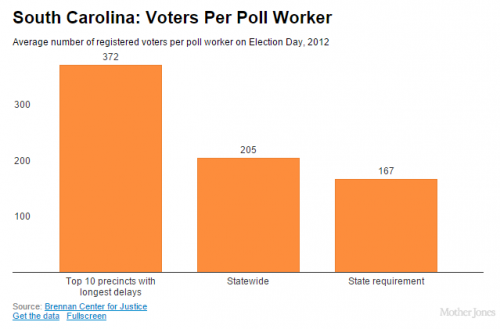 There are more graphs and more details at Mother Jones.

Voter suppression seriously harms our right to call ourselves a democracy.  Notably, it’s significantly worse today. When the Supreme Court struck down the part of the Voting Rights Act that required oversight of states with a history of voting discrimination, the ability of the federal government to ensure equal voting rights was seriously damaged. Previously monitored states immediately began passing legislation designed to suppress voting. As I wrote previously:

This is bad.  It will be much more difficult to undo discriminatory laws than it was to prevent them from being implemented and, even if they are challenged and overturned, they will do damage in the meantime.

Election games are as American as Apple Pie.

Disgraceful? Yes. But its nothing new and there's only one intent: to rig the election.

Gerrymandering--a sort of legal rigging of elections--has a rich and deep history here, as does voting by the dead, paying for votes, etc.

Gerrymandering keeps black politicians in power and the "registering to vote" requirement means nothing: simply having an address automatically registers someone to vote. Voter ID laws are normal world-wide. They're only vilified now, in the US, because the Democrats are losing power and it's trendy to blame everything on race relations. ID is required for nearly everything everywhere. This entire ordeal is a non-issue.

What about population density and racial density? It looks like in the original study they were able to reduce the racial effect to non-signficance after accounting for county/zip code. This seems to suggest that this is at least partly a product of high density and not having resources or sufficient polling places in those areas. I'd also be interested in if there have been studies that could predict these wait times using not only population density but also indicators like % white % black % hispanic in the area to see if areas with high minority density are hit the worst. Anyone know anything like that?

Strangely enough, we are also the only nation (or nearly so, are there any others?) that doesn't require voter IDs. Foreign election observers are routinely shocked at our abysmal lack of the most basic measures for electoral integrity.

The prevalence of early and absentee voting seem to nullify the "single day" is oppression argument.

And since election arrangements are made by the local governments elected by these same minority voters, I'm not sure how those eeevil right-wingers can be blamed for them.

But thanks for playing!

I'll add a link to this piece.

Is there any data on the 2004 wait times in Ohio where Ken Blackwell worked to suppress the vote in democratic districts which led to a Bush re-election and two likely improper right wing SCOTUS seat appointments: Alito and Roberts.

[…] Racial minorities generally have to wait longer than whites to vote. Nationally, blacks waited an average of 23.3 minutes to vote, more than double that of whites. In 2012, in “…South Carolina, the 10 precincts with the longest wait times were all in one disproportionately African American county.” […]