Today is the anniversary of the 34th American presidential election.  The year was 1920; it was the first presidential election in which women were allowed their own votes.  This seems like a good day to post a memento from the political battle over women’s suffrage, the right to vote and run for political office.

The fight for suffrage took decades and women were on both sides of the issue.  The document below is a copy of an argument against women’s suffrage — Some Reasons Why We Oppose Votes for Women — printed in 1894.  The National Association Opposed to Women’s Suffrage was led by Josephine Dodge.  (Open and click “full size” to read.) 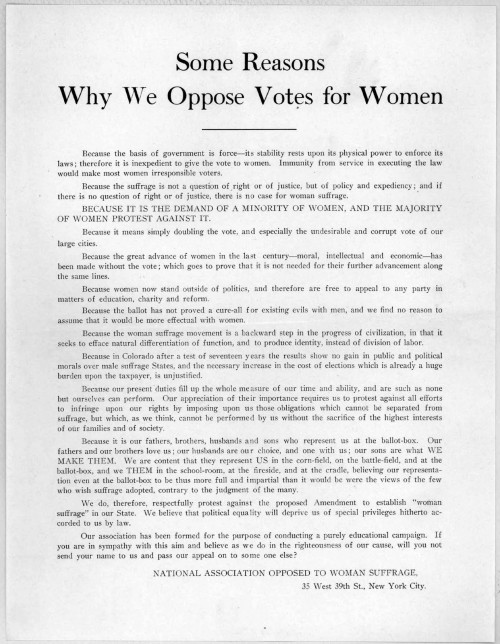 Alice Duer Miller was on the other side of the fight.  In 1915, she wrote and circulated a satirical response titled Why We Oppose Votes for Men.  Drawing on parallel logic, she made a case for why it was men, not women, who shouldn’t be voting. (Click for a larger copy.) 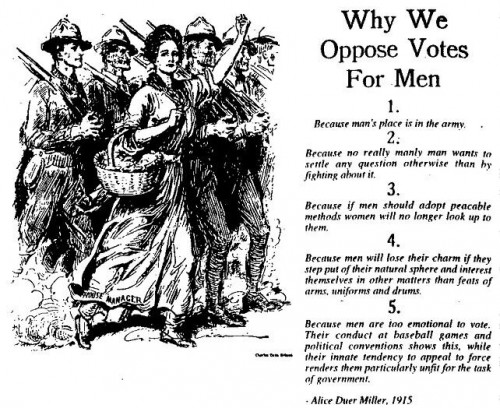 1. Because man’s place is in the army.

2. Because no really manly man wants to settle any question otherwise than by fighting about it.

3. Because if men should adopt peacable methods women will no longer look up to them.

4. Because men will lose their charm if they step out of their natural sphere and interest themselves in other matters than feats of arms, uniforms and drums.

5. Because men are too emotional to vote. Their conduct at baseball games and political conventions shows this, while their innate tendency to appeal to force renders them particularly unfit for the task of government.

It helps to have a sense of humor.

Combined, these lists serve to highlight the foolishness in disenfranchising others to vote. Unfortunately, the Supreme Clowns don't seem to get it even at this late date...

I like the 4th and 7th reasons in Oppose Votes for Women: essentially saying voting is useless, unrepresentative and corrupt anyway, so why bother doing it any more than we already do.

Voting fraud is the same as not being able to vote at all, voting loses its intended affect.

Oh what a huge burden it is on tax payers, to have to pay for votes to be organised...
What.

That satire is brilliant! Of course, even 100 years later, it isn't applied since men are the default and thus not othered.

[…] first presidential election in which American women were allowed to vote. In honor of the occasion, Sociological Images flagged this satirical pamphlet created by suffragette Alice Duer Miller in […]

I don't understand the timeline on the first one. Women got the right to vote in Colorado in the state wide referendum of 1893. It explicitly says a test of 17 years in Colorado. So 1894 (first election Colorado women could vote) + 17 would make it 1910 or 1911 not 1894. So did the writers of the Oppose Votes for Women not have their dates straight or maybe they meant 17 months? It doesn't work for Wyoming either which granted women the vote in 1869 as a territory and were admitted as a state in 1890.

[…] From today’s perspective, the pamphlet’s logic is absurd. And to many at the time, as well, women opposing their own enfranchisement was ripe for the mocking. Which was why, in 1915, the suffragette Alice Duer Miller wrote a response to it. She called her own treatise “Why We Oppose Votes for Men.” […]