Yesterday’s killing was the 39th school shooting in the U.S. this year.  Most of those got little press coverage. Unless someone is actually killed, a shooting might not even get coverage in the local news.

Why would an apparently happy kid shoot several classmates? That seems to be the question that’s getting the attention of the press and perhaps the public. “Struggling to Find Motive,” said one typical headline. That’s the way we think about school shootings these days.

It’s unlikely that any of the motives that turn up will be all that strange. Fryberg may have been upset by a racial comment someone had made the day before or by a break-up with a girl. He may have had other conflicts with other kids. Nothing unusual there.

But “why” is not the question that first occurs to me. What I always ask is how a 14-year old kid can get his hands on a .40 Beretta handgun (or whatever the weaponry in the shooting of the week is).  For Fryberg it  was easy. The pistol belonged to his father. Nothing strange there either.  Thirty million homes in the US, maybe forty million, are stocked with guns.

I went to Wikipedia and looked for school shootings since 1980 (here and here).  I eliminated shootings by adults (e.g., Lanza in Sandy Hook, Brevik in Norway). I also deleted in-school suicides even though these were done with guns and were terrifying to the other students. I’m sure my numbers are not perfectly accurate, and the population estimate in the graph below  is based on current numbers; I didn’t bother to find an average over the last 35 years. Still the differences are so large that I’m sure they are not due to technical problems in the data. 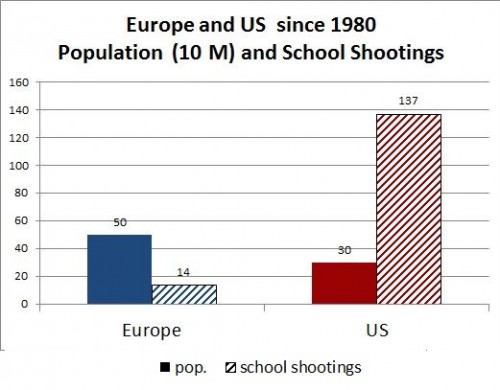 Does the U.S. have a much greater proportion of kids who are mentally unstable? Do our schools have more bullying? Are European kids more capable in dealing with conflicts? Are they more stable after break-ups? Do they spend less time with violent video games? Do their schools have more programs to identify and counsel the potentially violent?  I’m not familiar with the data on these, but I would guess that the answer is no and that our kids are no more screwed up than kids in Europe. Or if there are differences, they are not large enough to explain the difference in the body count.

No, the important difference seems to be the guns.  But guns have become the elephant in the room that nobody talks about.  Even asking about access to guns seems unAmerican these days.  Thanks to the successful efforts of the NRA and their representatives in government, guns have become a taken-for-granted part of the landscape. Asking how a 14-year old got a handgun is like asking how he got a bicycle to ride to school.

I can't figure your chart out either, but you're saying there have been 137 deaths in US schools due to firearms in the past 35 years? If so, we'd be better off pointing our finger at school bus drivers. 5 kids and 19 pedestrians die EACH YEAR due to the school-transportation business.

Compared to countries like Australia and most of western Europe the US is not exceptionally violent; but we're leading in homicide. So there is no doubt that the accessibility of firearms contributes to these fatalities. And there's no doubt Americans want their guns.

There is a price to pay for any freedom and we're willing to pay this one. But school shootings is not the horse to ride in on to make the case for change.

Does all of Europe have restrictive gun laws? Americans keep forgetting that it is a continent rather than a homogenous country, even when rememberng it can work ot your advantage. Check the gun laws properly, and look at numbers for school shootings in, say, each EU country. It's such a large sample that ny results would be hard to dismiss.

Yeah, this is some shit. Most of the U.S. public is actually in favor of some restraint on guns, so eventually it'll happen.

One of the things I've wondered is whether there has been a significant change in the USA over time. Guns have always been present, but the school shootings seem to have developed at such a high rate of occurrence only within the past 30 years.

Yes, it's a good idea to take the guns, but... you Americans should ask yourself, what it is about your schools that is so awful, that the only way to stop kids shooting them up is by disarming everybody? Do you really accept and tolerate a situation where children are gnashing their teeth in frustration, and thinking "if only I could get a gun"?

The Oslo/Utøya attacks in 2011 (perpetrated by Breivik) did however not include a school environment, which the text seems to imply. It did however involve child victims.

I'm disappointed in the work done on this post. The real sociology lies in the differences in the nations generally, not just who can find a firearm.

The data for "Europe" here apparently only accounts for the European Union (pop. 507 million), and excludes non-EU countries such as Russia, with a cumulative population over 200 million.

Russia is quite an interesting counterpoint. Gun laws there are more similar to those in the US than to most EU member states, with relatively high accessibility to civilian households, and about half the total population of the US. Russia's overall homicide rate is drastically higher than those of the US and the EU, one of the highest per capita in the world. And yet I've only been able to turn up two incidents of school shootings in Russia.

Similarly, another country with a much higher homicide and violent crime rate than the US is Brazil (pop. 200 million). The only school massacre on record in Brazil - though a horrific incident with many lives lost - was committed by an adult, and would have been excluded from the data above.

So, while there's a clear relationship between gun policy and violent crime fatalities, the US still remains an extreme outlier in the highly specific subcategory of school massacres, which can't be sufficiently explained by the gun problem alone, and which don't track evenly alongside other forms of gun violence.

Sadly, the victims of school shootings account for a very small percentage of child homicide victims, but the massacres get a wildly disproportionate share of press coverage. We may fail to see the forest for the trees if we lose sight of the epidemic of violence while examining one random particularity.

The issue is NOT the elephant in the room that no one will mention. It's mentioned a lot. The issue, in these comments and in society as a whole, is people who respond "What elephant?" or "No, it's a giraffe!"

Another anti-gun nut willing to ban gun ownership and disarm law abiding citizens. Maybe we should ban motor vehicles since other people use them to get drunk and mow down pedestrians? Banning guns only gives the criminals a safe working environment since criminals, by nature, don't follow laws.

In Europe they have stabbings, not shootings. http://rare.us/story/murrysville-stabbing-a-snapshot-of-a-gunless-america/

Combination of more media coverage and glamorization of shootings, more emphasis on electronics and not sports/social activities, and - what nobody every talk about - that these "school shooting" statistics reflect gang violence in inner cities. When gang violence (with illicitly acquired guns) is remove from the stats, the US actually has, depending on the year, either the same per capita figures as Europe or, oddly, even less.

No, guns are not the elephant in the room. Everybody is talking about guns, gun control, and the easy availability of guns...No, this is not the question. The question is the one that you don't want to ask first: Why? As you wrote, "But 'why' is not the question that first occurs to me." Why discount the 'why'? Of course this is the most important question!

NO MORE GUNS!!! This is the point that the writer is trying to make... Americans are gun crazy .. get rid of it and your country will be a lot more peaceful ..