Chart of the Week: Politicians Following, Not Leading on Same-Sex Marriage

For those of us in favor of same-sex marriage rights, it’s been an exciting few years. Politicians and legislatures have been increasingly tipping toward marriage equality. Lots of us are commending the powerful and high-profile individuals who have decided to support the cause.

But, let’s not be too grateful. 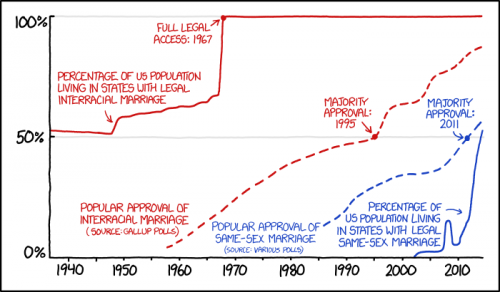 There’s a reason that we look back at Civil Rights legislation and see leadership. Politicians, litigators, and activists were pushing for rights that the public wasn’t necessarily ready to extend. In comparison, today’s power brokers appear to be following public opinion, changing their mind because the wind is suddenly blowing a new way.

I’m sure there are politicians out there taking risks at the local level. On the whole, though, this doesn’t look like leadership, it looks like political expedience.

In a democracy elected officials are supposed to represent the beliefs and opinions of those who elect them (50.1%).

I am a civil rights attorney, and what I saw something a little different when I first saw this chart. I saw the slow decline of the modern Supreme Court.

Throughout the 20th century, the Court considered unpopular legal rights more important than public approval. You could do an equivalent chart with any number of civil rights issues: school integration, voting rights, a woman's right to choose.

Some, including Supreme Court Justice Ginsburg, argue that the problem with the civil rights era is that the Supreme Court didn't wait for majority support - that the Court created rights that the nation wasn't ready to embrace. I disagree with the premise. In the past, we had politicians and Supreme Court Justices who believed in a principle that rights are more important than public opinion against those rights. Quoting Justice Jackson from the Barnette case in 1943: "The very purpose of a Bill of Rights was to withdraw certain subjects from the vicissitudes of political controversy, to place them beyond the reach of majorities and officials and to establish them as legal principles to be applied by the courts. One's right to life, liberty, and property, to free speech, a free press, freedom of worship and assembly, and other fundamental rights may not be submitted to vote; they depend on the outcome of no elections." When it comes to legal rights, the opinion of the majority is, and should be, irrelevant.

Today we have Supreme Court Justices who believe in political expediency over individual rights. This is why judicial nominations, and every single election is important.

[…] Chart of the Week: Politicians Following, Not Leading on Same-Sex Marriage […]