In 2013, after years of trying to reform the institution from the inside, faculty and students at my college submitted two complaints to the federal government. The combined 330 pages allege sexual harassment, assault, and battery on campus and argue that the college has ignored and silenced victims, mishandled adjudication and, at times, protected men found responsible for assault. We are now under federal investigation.

Forcibly revealing Occidental College’s failings hasn’t been fun for anyone, but it has changed us. It is now easier to report assaults, we are likely more vigilant about recording those reports, and students have more knowledge about their rights. Here is what happened: 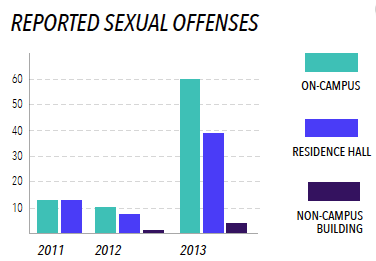 At The Occidental Weekly, Noel Hemphill writes that reports of sexual offenses have skyrocketed. They rose from 12 in 2011 to 64 in 2013. Over half of the cases reported were of incidents that occurred in previous years. That’s normal — victims often take a year or more to decide to come forward — but may also reflect a new desire by survivors to have their experience recorded in official statistics.

These numbers are disturbing, but it is unlikely that they reflect a rise in sexual offenses. Instead, they suggest that survivors of assault are feeling more empowered, have greater faith in their institution, and are pushing for recognition and change.

There is a sickening notion on modern campuses that aggression is to be tolerated--but only between students! An identical aggression between non-students of the same age would be criminal and engender outrage. Being a male student gives you a "license to kill."

College "boys" who commit acts of aggression should go to jail for a decade or so and have their headshots show up on the sex offender website for the rest of their lives. Any employee of the college who is complicit in covering up the crime should be prosecuted to the fullest extent of the law (and either pay through the nose for defense or get represented by an overworked state attorney). Colleges with a pattern of complicity should lose any government funding, and their presidents should face civil charges.

Enough is enough with this now entrenched and disgraceful social norm.