Map of the Week: 57% of Languages Do Not Have Gendered Pronouns

The map below is an interactive available at the World Atlas of Language Structures.  It represents an extensive, but not quite comprehensive collection of world languages. Each dot represents one. White dots are languages that do not include gendered pronouns. No “he” or “she.” Just a gender neutral word that means person.

The colored dots refer to languages with gendered pronouns, but there are more than one kind, as indicated by the Values key. The number on the right, further, indicates how many languages fit into each group. Notice that the majority of languages represented here (57%) DO NOT have gendered pronouns. 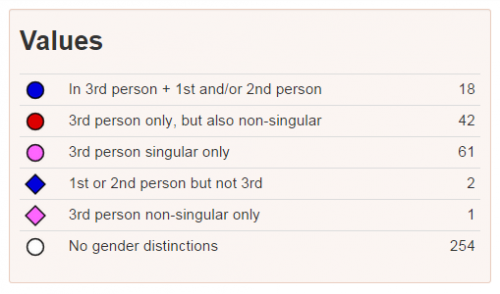 The map at the site is interactive. Go there to click on those dots and explore.

Not sure the benefits here, but it seems to me like its better to have more ways to distinguish people, places and objects in a language as its likely to make communication clearer.

What can we say about the relative gender equality among those who speak languages that do no have gendered pronouns vs. those who do?

The dot for Japan seems to be wrong. Japanese pronouns are rather complicated, as there are different ones in the three different levels of formality, and the most formal level is not gendered, but the most informal level is highly gendered in the first person (male and female speakers use different grammatical constructs and different vocabulary, including different first-person singular pronouns).

The "gendered 3rd person" claim for Japanese seems wrong also, as the most common form translates literally as "that person", to which an additional modifying phrase can be added ("that tall person", "that male person", …).

Given that the information seems wildly wrong on a major language, I'm dubious about the accuracy on all the minor languages.

The dots are based on particular studies and articles written by external authors. If there are discrepancies, it is due to the paper, not WALS. Also, in order to compare cross-linguistically, sometimes simplifications are made in order to be able to do that analysis - not ideal, certainly, but an unfortunate reality of the work at hand. If one attempted to include every languages's nuances then there would not be much to compare. Often this type of typological analysis is a generalization as to what the 'basic' or most common form might be. This comparison obviously does not make room for formality. And the map is not about the forms that people would use based on their gender, but when using personal pronouns. Not to discount gasstation's comment, as they make good points (and points that are my sticking point with linguistic typology as well - it seems a touch pointless when it's simply OK to gloss over important linguistic details), but just to clear up a few things about what WALS is, and isn't.

On that same note, we have a total of, what, about 360 some languages here? While it may seem like a large number for comparison, compare that to what is thought of as a fairly good guess for the number of languages in the world: ~6000-7000. So while the map shows us some interesting trends, they can only be that, trends, and guesses as to trends (also see earlier discrepancies with Japanese). I wouldn't call it an extensive number in the slightest - that comment seems misleading to readers who may not know just how many languages there are in the world. The implication that it is "extensive but not quite comprehensive" seems to me to be implying that the majority of world languages do not use gendered pronouns, when in fact, we don't even know how many languages there are, nevermind having an in-depth knowledge of everyone's pronouns.

The map is a little misleading in Australia as well. Many aboriginal cultures , while it is true they may not have a gendered pronoun, have highly gender segregated communities.

[…] How many world languages do not have gendered pronouns? […]

Unfortunately, WALS exaggerates data from unpopular languages. Call me a grumpy Englishman, but a count of languages doesn't really tell us much. A count of speakers is much more indicative of how the people of the world speak and what conversations actually happen. It is also far less affected by the definition of what constitutes a language (which is non-trivial). Popular languages (including rather a lot with gendered pronouns) are gerrymandered out of relevance.

I could chime in as well with an objection to how Korean was classified, but we should all keep in mind that a linguist's criteria for a language featuring "only third person singular gendered" pronouns would be different from that of a layperson who uses or studies the language.

By the same token, I have to agree with previous commenters that to assume or imply that a narrowly defined linguistic technicality may have cultural analogs or implications is as misleading, if seductive.

So, for example, it is true that there does exist a 3rd person neutral pronoun used in written Korean, and supposedly a recent trend to use it as neutral/male, which has "engendered" use of a feminine-modified version; but in practice they are rarely used. According to wikipedia, both their genderedness and limited revival are due to their use in translations of foreign texts. (If true, an intriguing, if esoteric, phenomenon.)

I'll assume that the "singular only" part is linguistic jargon, as in practice most any Korean noun or pronoun (including the pronoun in question) is routinely made plural by an added syllable.

At any rate, nothing to see here, sociologically speaking.

On the other hand, while there are by definition no gendered 2nd person pronouns in Korean, in practice there are many, as Koreans commonly use gendered familial nouns in this role. For example, strangers in public are often addressed as "grandmother", "uncle", "girl-child", etc.; another example is certain non-familial intimates being addressed as "older brother" or "older sister" (where word choice implies the genders of both the person addressed and the speaker, as well as relative age/status).

(There are gender-neutral forms of address as well, of course. And these familial adaptations can also be used in third person.)

So in this case, rich pronoun-related sociological material that is ignored by the pronoun map.

The dot for French is wrong. It has gendered pronouns for both sing. and plural 3rd person, not just 3rd pers. sing. So I'm not sure how much I would trust this data.

Even if the information used for every single language on the map is completely correct (which is unlikely given the nuanced nature of most languages), both the map and the claim are misleading. This image claims that 57% of languages don't use gendered pronouns, and I feel that by claiming this, the image implies that 57% of the world's population doesn't use gendered pronouns, when in fact that is grossly overstated. For example, I'm not going to try counting the number of dots in America alone (especially California), but most of those are languages only spoken by a tiny fraction of people. If the goal of this was something to do with gender identity through speech and its aim was to show how many cultures don't even have specific words for such things, then it was a poorly-researched, poorly-conceived attempt.

Why Mexico appear with white dots? Spanish is full of gendered words! Greetings from Mexico, btw

[…] or there is the language to describe non-binary gender and gender-pronouns. In fact 57% of languages globally do not use gendered pronouns such as ‘he’ and ‘she’. I believe that gender is more […]

I am of Gujarati origin and speak it as a second language (English is my first language), and with 44 million speakers, it is not represented (25th most common language in the world). A bit of an oversight? Not to mention, Hindi is listed as a gender neutral language, which is also not quite true. Both Gujarati and Hindi have declensions of nouns indicating gender.

This might be more informative if the plots were done by speakers as well, and not absolute number of languages.

There is no gender distinction in persian language, but it is shown with purple circle while it should be white. The map does not seem to be a right guide!

Check out this article! Is there any marxist analysis of this? Did non-gendered languages live longer in primitive communism phase of development or something? – Comprehensive Communism — January 30, 2021

so the map is basically meaningless, and the data is very rough, but the concept is to say languages are very diverse and there is no right or wrong way to structure gender into grammar?

i actually disagree, as i believe wrong ways definitely exist, but yes it's a thought-provoking concept.

There are two of four dots on Spain (conveniently one is Euskera); Portugal, Norway, Sweeden and the smaller countries near Latvia are missing theirs, while California alone has dozens.
Not saying they might be biasedly disrregarding languages with mainstream & legal use as dialects and straight up ignoring primary country languages while giving a lot more research into extremely local/near deprecated languages but they might just be doing that.
Also if that blue ball in Angola is Portuguesse that's straight up dirty

I am a PhD student in the field of psycholinguistics at TU Dortmund, in Germany and my focus of research is on gender and linguistic relativity. When searching for languages without grammatical gender, I found your website with very interesting information.
However, as my mother tongue is Persian, I should kindly ask you to change the status if Persian in your map. Because Persian belongs to languages with no distinction of gender. Persian 3rd person singular pronoun in "u" (او) or "vey" (وی) which only shows that the referent is a human and "ān" (آن) which shows that the referent is non-human. None of these forms distinct between genders. Therefore, a correction is needed in your map, with excluding Persian from the groups of languages with colored dots and including them to the last group of dots without any color.