As workers battle to raise the minimum wage it is nice to see more evidence that doing so helps both low wage workers and state economies.

[Gould] compares the 10th percentile [lowest earners] wage growth among these thirteen states that increased their minimums with the rest that did not. The results are the first two bars in the figure below. 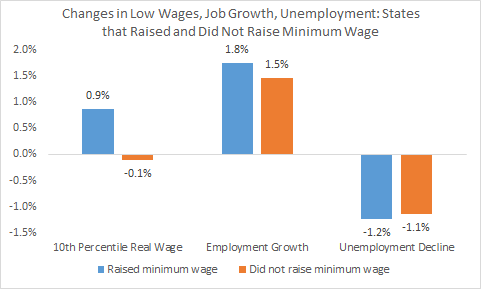 Real wages for low-wage workers rose by just about 1% over the past year in the states that raised their minimum wages, and were flat (down 0.1%) in the other states.

OK, but did those increases bite into employment growth, as opponents typically insist must be the case? Not according to the other two sets of bars. They show that payroll employment growth was slightly faster in states that raised, and the decline in unemployment, slightly greater.

Where is the discussion of whether or not the differences are statistically significant?

I find that last pair of bars indecipherable. "Unemployment declined by -1.2% versus -1.1%" ... there are way too many negatives in that statement for me to say which is better!

Taking it literally, if unemployment declines by a negative percentage, that means unemployment increases, which is worse, so a bigger number should be worse. But that's not the message you are trying to convey, I think?

Paraphrasing: "As workers battle to raise the minimum wage it is nice to see more
evidence that agrees with my priors. Confirmation bias FTW."