Economist Robin Hanson has an “it isn’t about” list. It begins:

I was reminded of this recently when I followed a link to a Pew quiz on religious knowledge. It’s a lite version of the 32-item quiz Pew used with a national sample in 2010.  One of the findings from that survey (the full report is here) was that people who went to church regularly and who said that religion was important in their lives didn’t do much better on the quiz than did those who had a weak attachment to church and religion. 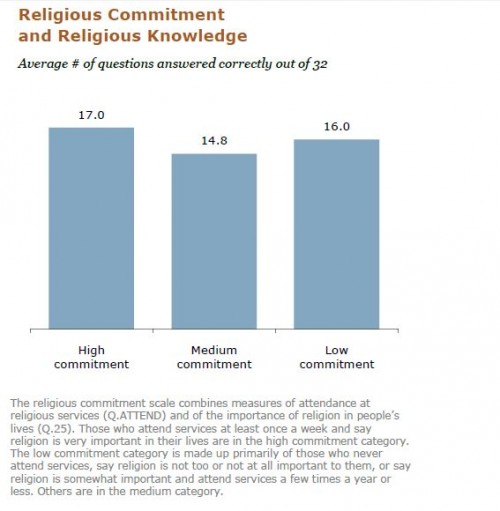 The strongly committed averaged 17 correct answers out of the 32 questions; the uncommitted, 16.  This same pattern was repeated in the more recent 15-question quiz.

The committed may derive many things from their church attendance and faith, but knowledge of religion isn’t one of them.

To be fair, the quiz covers many religions, and people do know more about their own religion than they do about others.  “What was Joseph Smith’s religion?” Only about half the population gets that one right, but 93% of the Mormons nailed it. Mormons also knew more about the Ten Commandments. Catholics did better than others on the transubstantiation question.  But when it came to knowing who inspired the Protestant Reformation, Protestants got outscored by Jews and atheists.

Overall, nonbelievers, Jews, and Mormons did much better than did Protestants and Catholics. 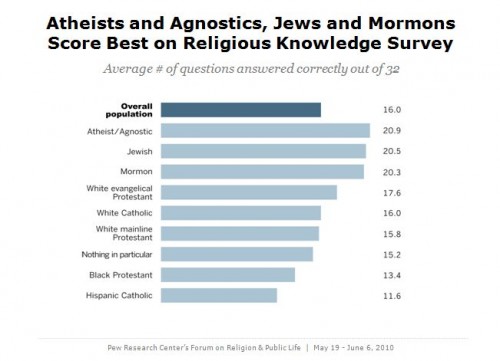 One reason for their higher scores might be education – college graduates outscore high school or less by nearly 8 points out of 32. 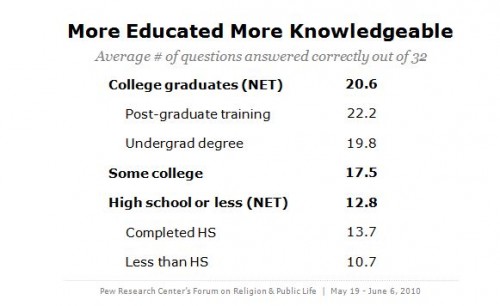 It may be that nonbelievers, Jews, and Mormons are more likely to have finished college. Unfortunately, the Pew report does not give data that controls for education.

But another reason that these groups scored higher may be their position as religious minorities. Jews and Mormons have to explain to the flock how their ideas are different from those of the majority. Atheists and agnostics too, in their questioning and even rejecting,  have probably devoted more thought to religion, or more accurately, religions. On the questions about Shiva and Nirvana, they leave even the Jews and Mormons far behind.

For Protestants and Catholics, by contrast, learning detailed information about their religion is not as crucial. Just as White people in the US rarely ask what it means to be White, Christians need not worry about their differences from the mainstream. They are the mainstream. So going to church or praying can be much more about feelings – solidarity, transcendence, peace, etc.  That variety of religious experience need not include learning the history or even the tenets of the religion itself. As Durkheim said, the central element in religion is ritual – especially the feelings a ritual generates in the group. Knowing the actual beliefs might be a nice addition, but it’s not crucial.

Whether or not members of the any given faith understand it's arcane tenets in detail is largely irrelevant. I mean, what difference does it make?

The better question is: given the disgraceful role religions have played in the modern world, why don't major leaders of religions join together and profess to the world repeatedly that violence in the name of god stop immediately?

But we already know the answer. Organized religion has nothing to do with god. It is all about political control and ultimately the Benjamins...

Everyone should simply walk away from religion now. It would save millions of lives untold expense to the world. Imagine?

In many of today's "mega-churches" all the congregation is asked to believe in is that "Jesus is My God and Saviour." That's the beginning and end of it.

When I was in high school and college, I was very interested in Theology. Then it finally struck me that Theology is about nothing...similar to Philosophy (with the exception of William James) which is just the expression of fantasies.

" when it came to knowing who inspired the Protestant Reformation, Protestants got outscored by Jews and atheists."

Protestantism is pretty broad. Most churches that qualify as protestant have either explicit or perhaps examined differences with Luther/Lutheranism, so I'd expect that one to be weak. Baptists are protestants, but baptists have their own beefs with Luther, and don't necessarily lionize him. Ask them about Menno though...

I'll have to remember that white privilege analogy to mainline protestant privilege. It will come in handy.

[…] an old old story: It turns out that many Christians don’t know much about their own religion. Come on guys, all you had to do was read one book! It’s all there! Ok, it’s a long […]

I got 14 / 15 questions correct. The one I got wrong was the question about the First Great Awakening, which, as far as I'm concerned, is less a religion question and more an American history question, and really, who gives a shit about American history.

I'm Muslim, and I am yet again annoyed at Pew's lack of inclusion of respondents outside of the usual suspects. Maybe this question has less to do about the nature of religious people and more about privilege.

It boggles my mind that yet again, a research study by Pew is featured in this site that ignores the second largest religion in the United States, Islam.
http://www.washingtonpost.com/blogs/govbeat/wp/2014/06/04/the-second-largest-religion-in-each-state/
What's going on?

This is an oddly-designed study: on what basis should we believe that being a member of one religion makes you any more or less likely to know about other religions? I really don't think you can draw the conclusion that Protestants and Catholics know less about their religion. You can say they know less about all religions, but this study doesn't at all measure knowledge about a singular religion.

Not surprising. The more you know about religion the less likely you are to take it seriously.

Why can't I ever find myself in these charts? Are non-traditional christian-leaning eclectic mystics uncommon?

thats cus all atheists read the same talking points from the same anti-christian sites. the same questions they probably asked.

Only 93% of Mormons answered the question on the founder of Mormonism correctly? What?

"One reason for their higher scores might be education "

In fact, at a glance the numbers suggest this could account for the ENTIRE discrepancy. Without that analysis, I posit every other conclusion this article makes is completely pointless. Correlation is hardly causation, and until this other much more likely cause is addressed, one should not, must not, go any further. To do so is irresponsible.

Unless, of course, you simply believe that blacks and hispanics are dumb. Go ahead.

[…] Knowledge Survey is still making waves. Montclair State University sociologist Jay Livingstone offers an explanation for why Atheists/Agnostics, Jews, and Mormons all performed better on the survey than […]

[…] Livingston at Sociological Images writes about a Pew quiz on religious […]

i wonder how well atheists would do on a religious experience quiz, vs. this data points quiz. and by atheists i mean nonbelievers globally, not just the west's apostate white males.

The message of Jesus about forgiveness of our sins, reconciliation to Father God and eternal life will always be relevant to people. This is a relationship and trancends ritual and religions. Religions are created by people, true Christianity is created by a loving, holy God. Religious people crucified Jesus.

To be honest, I'm a little far from religion and I don't understand it at all. I haven't read the Bible either, so I have practically no idea about it. I'm more interested in psychics. What do you think of it? I recently came across the psychic reading free app and decided to give it a try. Most of all, of course, I was interested in the theme of love and relationships.