Saturday Stat: NFL Players May Be More Law Abiding Than Other Men

Ray Rice’s violent assault of Janay Palmer has placed a spotlight on the criminal records of professional football players more generally. It is tempting to presume that men who spend their lives perfecting the use of violence are more violent in their day-to-day lives, but we don’t have to speculate. We have some data.

USA Today maintains a database of charges, citations, and arrests of NFL players since 2000 (ones they found out about, in any case). According to their records, 2.53% of players are arrested in any given year. This is lower than the national average for men of the same age. And, despite the publicity, this year looks like it will be the least criminal on record. 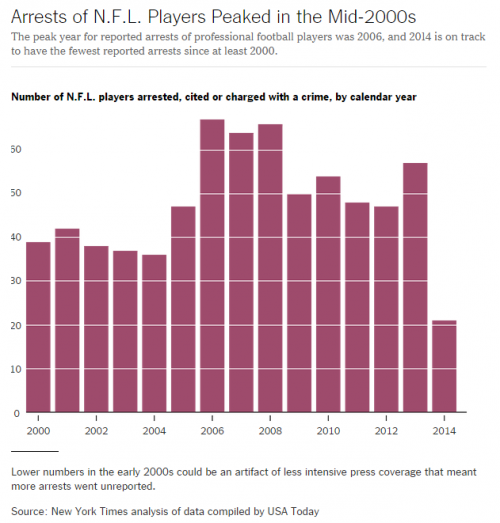 Domestic violence is the third most common charge or cite, following closely behind another violent crime, assault and battery. But by far the most common trouble NFL players face is being charged with a DUI. 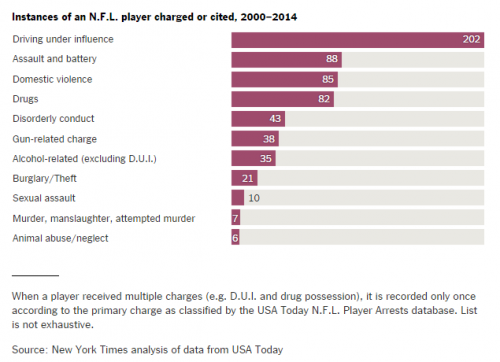 Interestingly, not all teams have similar rates of arrests, charges, or cites. These data below reflect 15 years of data, showing the wide disparity among teams. The number of run-ins with police tend to correlate well year-to-year, so this chart represents a stable trend. 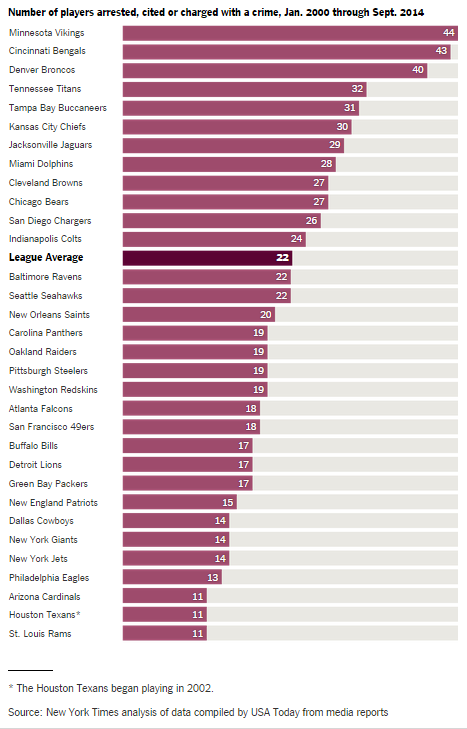 Neil Irwin, writing at the New York Times, says that varying levels of criminal activity may be related to club culture (that is, some franchise’s may be better at suppressing or inciting criminal activity than others) or it may be influenced by the cities they play for (e.g., there won’t be as many DUIs in cities like New York City where there’s substantially less driving). Both are great sociological explanations for the variation between teams and consistency across seasons.

I've seen apologists for the NFL making this "Richard Nixon excuse" (everyone's doing it...) on TV. Unimpressive..regardless of its truth.

1. Comparing reported violence among NFL player to the general population is easy and convenient but not as telling as if the comparison were against their peers, with regard to their wealth, race and/or celebrity status.

2. Researchers don't like police and FBI stats when comparing cities because the extent to which crimes are actually reported vary so much. If I punch you in the nose in Brooklyn there's a smaller chance this ends up in official records than if I did so in Indianapolis. I don't make much of the team comparison above.

Very interesting, but I think we need to make a bigger point about something you kind of mentioned in passing: "(ones they found out about, in any case)". Is it possible that the NFL stars (and other celebrities) might be more likely to just not even be charged/arrested in some cases?

Also, if that first graph includes all crimes, shouldn't there be some control for socioeconomic status? I don't know if domestic assault rates vary that much by how wealthy the person is, but I would think things like burglary rates would go down as you become more wealthy.

Not too surprising really given that by definition someone working for the NFL is gainfully employed and well paid, which the general population isn't. Someone making millions to play football isn't too likely to be robbing liquor stores or selling drugs. I wonder if the stats would be closer to the national average if you looked specifically at charges that tend to be income-neutral like DWIs.

Can someone who knows a little more about domestic violence and sport chime in here? This is an interesting enough post, however using official arrest rates for a crime statistic is pretty lame. It is a extremely flawed stat and many criminologists don't use it. This is like saying "Women don't have to worry about rape on college campuses cause the arrest rate for rape is really low."

Can we get a guest blogger to actually shed some light on this. Neil Irwin is an economist not an expert on sport or crime. I'm sure we can find a guest blogger via Google Scholar to help us understand what is going on here and in the culture of sport.

Lisa, you're making a common error in this comparison: that of comparing the felony rate of NFL players to that of the population at large.

The NFL is a mid-sized corporation, consisting of a national headquarters in New York City with 300-400 employees, and 32 branch offices in major metropolitan locations within the U.S.

Each branch office has approximately 200-300 employees, with 53 of those employees being given the title of "football player", and the remainder being classified as coaches, as managers, as executives, and other various front-line and back-office staff.

Add those figures up and you have a company with approximately 7,000 employees with annual revenues of around $10 billion dollars.

That's a mid-sized company, by the common definition of business analysts, economists, business school professors, and many others whose job it is to study the world of business.

I've worked for a number of mid-sized companies. None of them come anywhere close to NFL, Inc.'s level of serious felony arrests and convictions.