Women in the U.S. have made some monumental gains at work.  We’re now at least half the labor force and more women today are middle- and upper- managers in corporate America.  Even so, I wasn’t surprised to discover that women have not (yet) made similar inroads into high-level corporate crime.

Rather, it’s “business as usual” when it comes to who is responsible for orchestrating and carrying out major corporate frauds.

For the American Sociological Review, Darrell Steffensmeier, Michael Roche, and I studied accounting malpractices like security fraud, insider trading, and Ponzi schemes in America’s public companies to find out just how involved women were in these conspiracies.  The Corporate Fraud Task Force indicted 436 individuals involved in 83 such schemes during July 2002 to 2009.  We read and recorded information from indictments and other documents or reports that described who was involved and what they did.

I expected the share of women in corporate fraud to be low – definitely less than the near-half that are women among (low-profit) embezzlers arrested each year– like your bank teller or local non-profit treasurer.   However, I was surprised that women corporate fraudsters were about as rare as female killers or robbers – less than 10% of those sorts of offenders.  Of the 400+ indicted for corporate fraud, only 37 were women.

Most of these frauds were complex enough to require co-conspiracy over several years and a criminal division of labor.  Often, women weren’t included at all in these groups.  When they were, they were nearly always in the minority, often alone, and most typically played rather small roles.

The Enron conspiracy, for example, led to over 30 indictments; three were women and each played a minor role. The five women indicted among 19 in the HealthSouth fraud were in accounting-related positions and instructed by senior personnel to falsify financial books and create fictitious records.  Martha Stewart, rather than criminal mastermind of an insider trading conspiracy, committed “one of the most ill-fated white-collar crimes ever” in which she saved just $46,000 after receiving a stock-tip second-hand from her broker.

Women were almost never the ringleader or even a major player in the fraud.  Only one woman CEO led a fraud – the smallest fraud we studied – and two women with their husbands.  One reason surely must be that women are not as often in positions to lead these schemes.  However, even when we compared women and men in similar corporate positions, women were less likely to play leadership roles in the fraud.  Is there a “glass ceiling” in the white-collar crime world?

What most surprised me, however, was how little the women benefited from their illicit involvement.  The wage gap in illicit corporate enterprise may be larger than in the legitimate job market.  Over half the women did not financially gain at all whereas half the men pocketed half a million dollars or more.  The difference in illicit-gains persisted even if we compared women to their co-conspirators.  Males profited much more. Women identified “gains” such as keeping one’s job. 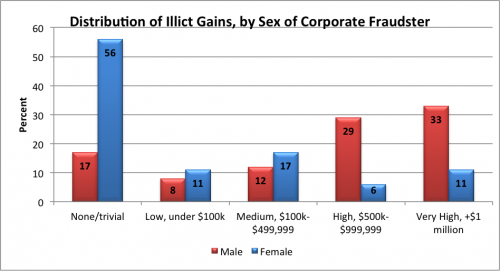 Even when women are in the positions to orchestrate these frauds, it’s likely that the men who initiate these conspiracies prefer to bypass women, involving them in minor roles when need dictates or when trust develops through a close personal relationship.  And women hardly initiated any schemes.  Women business leaders tend to be more risk-averse and apt to stress social responsibility and equity, perhaps making corporate fraud unlikely.

So, would having more female leaders reduce corporate crime?  We don’t know, but we think it’s likely.  Women executives tend to make more ethical decisions, avoid excessive risk-taking, and create corporate cultures unsupportive of illegal business practices.  Time will tell if, on the other hand, women moving up the corporate ladder increasingly adopt a wheeler-dealer, “dominance at all costs” corporate ethic.

Some may be a little disappointed that women either cannot yet or do not exercise their power over others to illegally advance their business (and personal) interests as men have been doing for generations.  There are moments when I catch myself “rooting” for a more successful pink-collar offender – and examples exist.  However, when I consider the destruction and havoc wrought on the U.S. economy and so many peoples’ lives by these financial crimes, I am reminded that this is not the way in which I hope women wield power when business leadership roles are more equally shared.

This posts originally appeared at the Gender & Society blog.

Jennifer Schwartz, PhD, is an associate professor of sociology at Washington State University.  Her research focuses on the gender and race demographics of criminal offenders, violence, and substance abuse.

I think there is a lot of cultural pressure on women - from birth - to be obedient, to be "good little girls" and to always behave. We are also actively discouraged from taking risks.

I see this anecdotally all the time when getting a cup of simple tea at Starbucks.

I take my own personal cup and request that it be filled with nothing but green tea straight out of the pitcher with nothing added. Starbuck's official rules dictate that my cup be put in line with the other orders ahead of me and I be charged full price.

Yet, if the person behind the counter is male, they will frequently break the rule by getting my drink for me immediately and charging me the discounted, "refill" rate - without my asking.

If the person taking my order is female, she will almost ALWAYS follow the rules, put my drink in line with the rest and charge me full price.

Your phrases "glass ceiling" and "business as usual" strike me as bad choices: 1) Glass ceiling would assume that women are interested to the same degree in committing such fraud and that women have the same low morals and high risk-taking as men. THEY DO NOT. As you later state yourself.
2) It's not "business as usual", it's "patriarchy with a damaging construction of masculinity". "Business as usual" normalizes SEVERELY damaging constructions of masculinity and constructions of what a "normal economy" and "normal class relations" look like and renders them implicitly unchangeable.

I think part of the reason women don't commit more fraud is, as Leslee Bottomley Beldotti points out, how women are socialized to be obedient and not take risks. The other part is that it's much harder for women to get away with it. Women are seen as less competent than men, so women's actions are going to come under much more scrutiny. People just won't trust her to know what she's doing like they would a man.

Women are way behind men when it comes to executive jobs. In addition they are more scrutinized and challenged to make a difference. And those women that want to play by the same men morals are scorned and stigmatized.

I don't think gains at the C-level would correlate with crime for women, at least such a juxtaposition does not constitute an intuitive argument to me. A greater number of women now own guns and don't commit violent crimes at the rate men do either.

Women are forced to confront their maturity biologically in a way men never are. Perhaps nature helps predetermine their more altruistic or at least less anti-social behavior as adults.

[…] Gender disparity in corporate fraud. Even in white-collar crime, the pay gap persists. […]

[…] grave seriousness, as the criminal and immoral behavior of our financial leaders is exactly what triggered a Great Recession once… and could […]

We told you so: If liberals understood economics, they wouldn’t be liberals | The First Street Journal. — March 31, 2015

[…] grave seriousness, as the criminal and immoral behavior of our financial leaders is exactly what triggered a Great Recession once… and could […]