Racial Disparity in Imprisonment Inspire Whites to be “Tough on Crime”

“Advocates might want to try different language (or a different approach) in their campaign to reform the criminal justice system,” writes Jamelle Bouie for Slate. He drew his conclusion after summarizing a new pair of studies, by psychologists Rebecca Hetey and Jennifer Eberhardt, looking at the relationship between being “tough on crime” and the association of criminality with blackness.

In the first study, 62 White men and women were interrupted as they got off a commuter train and invited to chat about the three strikes law in California. Before being presented with an anti-three strikes petition, they were shown a video that flashed 80 mugshots. In one condition, 25% of the photos were of black people and, in another, 45% of the photos were.

Among the subjects in the first “less black” condition, more than half signed the petition to make the law less strict, but only 28% in the “more black” condition signed it. 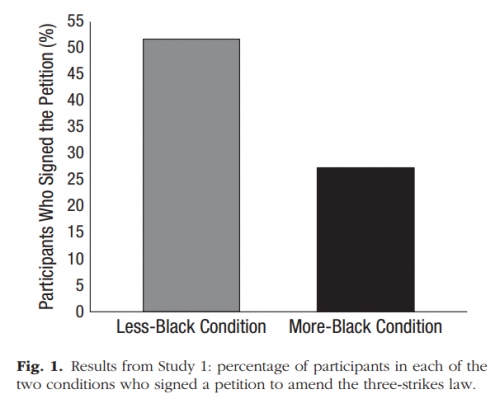 A second study in New York City about the stop-and-frisk policy had a similar finding: 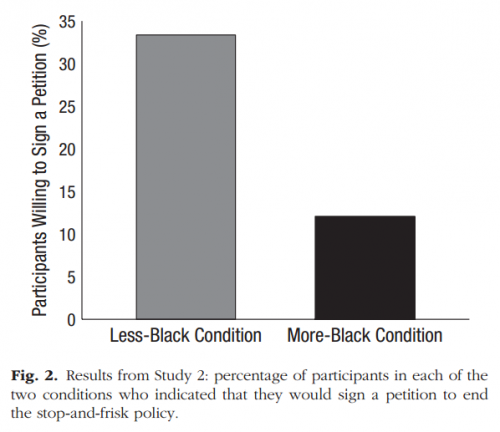 The results suggest that white Americans are more comfortable with punitive and harsh policing and sentencing when they imagine that the people being policed and put in prison are black. The second study suggested that this was mediated by fear; the idea of black criminals inspires higher anxiety than that of white criminals, pressing white people to want stronger law enforcement.

So, as Bouie concluded, when prison reformers and anti-racists point out the incredible and disproportionate harm these policies do to black Americans, it may have the opposite of its intended effect. Hetey and Eberhardt conclude:

Many legal advocates and social activists assume that bombarding the public with images and statistics documenting the plight of minorities will motivate people to fight inequality. Our results call this assumption into question. We demonstrated that exposure to extreme racial disparities may make the public less, not more, responsive to attempts to lessen the severity of policies that help maintain those disparities.

“Institutional disparities,” they add, “can be self-perpetuating.” Our history of unfairly targeting and punishing black men more than others now convinces white Americans that we must continue to do so.

Or in other news, people are so racist, that when you tell them about racism, they are like "yes, more of that racism, please." Great. Just great.

A quick clarification: Jamelle is a he, not a she.
Is there an aspect to this which is "could this affect people like me?" The "more black" group, to many whites, is more like "other people." "I want other people, who are not law abiding like me, to get tough sentences." Generations of politicians have successfully won office offering that promise.

It is human nature to find acceptable what we become accustomed to. That is one reason why consciousness-raising in the sixties and seventies was so successful in bringing about a sea change in society. It is derided today as useless, but there is probably no other movement in history that brought about so much change with little to no violence.

I wonder how much of this is due to white Americans inability/unwillingness to acknowledge that racism exists in America. They seem more comfortable without the implicit message that the three-strikes law is a racist law. But, while attempting to hide the racialized nature of these laws may work in an experiment it is unlikely to succeed in a non-controlled political environment. I think directly challenging perceptions of racism might be a more fruitful long-term strategy for activists.

Damned if you do, damned if you don't. That about sizes it up. Hope Lisa Wade will correct her misidentification of Jamelle Bouie's gender, because I'm sharing this post like crazy.

Could this kind of research actually make it into an academic journal in sociology these days or is something like Slate just a place to go if you don't have anywhere to?

The subjects are 62 commuters "interrupted" as they got off a train in the morning? Are you freggin' kidding me?

This is one of the most ridiculous "studies" I've ever heard of. Lisa, what would your more gifted undergrads actually say about this if you presented for assessment?

Wow. An interesting study. I look forward to its counterpart where they put black people under the microscope and criticise them....buuuuut I'll probably be waiting a while.

It's a shame that people keep pretending that this is a modern issue which exists only among white people. Different Arab scholars in the Middle Ages wrote the following on the subject of the black Africans they encountered:

"As for the Zanj [blacks], they are people of black color, flat noses, kinky hair, and little understanding or intelligence." - Al-Muqaddasi, 10th century.

"Many have observed that the ape is more teachable and more intelligent than the Zanj [blacks]." - Nasir al-Din al-Tusi, 13th century.

"[Blacks] are ugly and misshapen, because they live in a hot country." - Ibn Qutaybah, 9th century.

"There are only humans who are closer to dumb animals than to rational beings. They live in thickets and caves, and eat herbs and unprepared grain. They frequently eat each other. They cannot be considered human beings." - Ibn Khaldun, 14th century.

"The Zanj are so uncivilized that they have no notion of a natural death. If a man dies a natural death, they think he was poisoned. Every death is suspicious with them, if a man has not been killed by a weapon." - Abu Rayhan al-Biruni, 11th century.

"As regards southern countries, all their inhabitants are black on account of the heat of their climate... Most of them go naked... In all their lands and provinces, gold is found.... They are people distant from the standards of humanity." - Unknown Persian author, 10th century.

A better article might be "Racial disparities in rapists, or drug dealers, or gang members, or murders"... Oh yeah, I forgot. This is one of those pinko super liberal posts that always get the victims and criminals role-reversed. Good reading though , when I'm in the mood for fictional drama.

[…] When white people are reminded that black people are disproportionately imprisoned, for example, it increases their support for tougher policing and harsher sentencing. Black prisoners receive presidential […]