Benedict Anderson famously coined the phrase “imagined community” to describe the way that large groups of people without direct contact could nonetheless think of themselves as a meaningful group.  He originally discussed this in the context of nations.  In his book, he writes:

It is imagined because the members of even the smallest nation will never know most of their fellow-members, meet them, or even hear of them, yet in the minds of each lives the image of their communion… it is imagined as a community, because, regardless of the actual inequality and exploitation that may prevail in each, the nation is always conceived as a deep, horizontal comradeship. Ultimately it is this fraternity that makes it possible, over the past two centuries, for so many millions of people, not so much to kill, as willingly to die for such limited imaginings.

Whenever someone refers to “Americans,” he or she is conjuring up this idea of an imagined community.  Why do we feel that we have so much in common with other Americans?   We will only meet a very small percentage of Americans in our lifetimes.  We have things in common with some other Americans, but very little in common with still others.  And, in many important ways, we are probably more like certain segments of other societies (e.g., individuals in the middle class in the U.S., for example, are probably more like those in the middle class in the U.K. than they are like very poor or very rich Americans).

Others have used Benedict Anderson’s term to describe other kinds of imagined communities.  Apparently Skoal is hoping that “dippers” will find a sense of comraderie and devotion to each other (“loyalty”) and the product through the imagining of a Skoal community (“Brotherhood”): 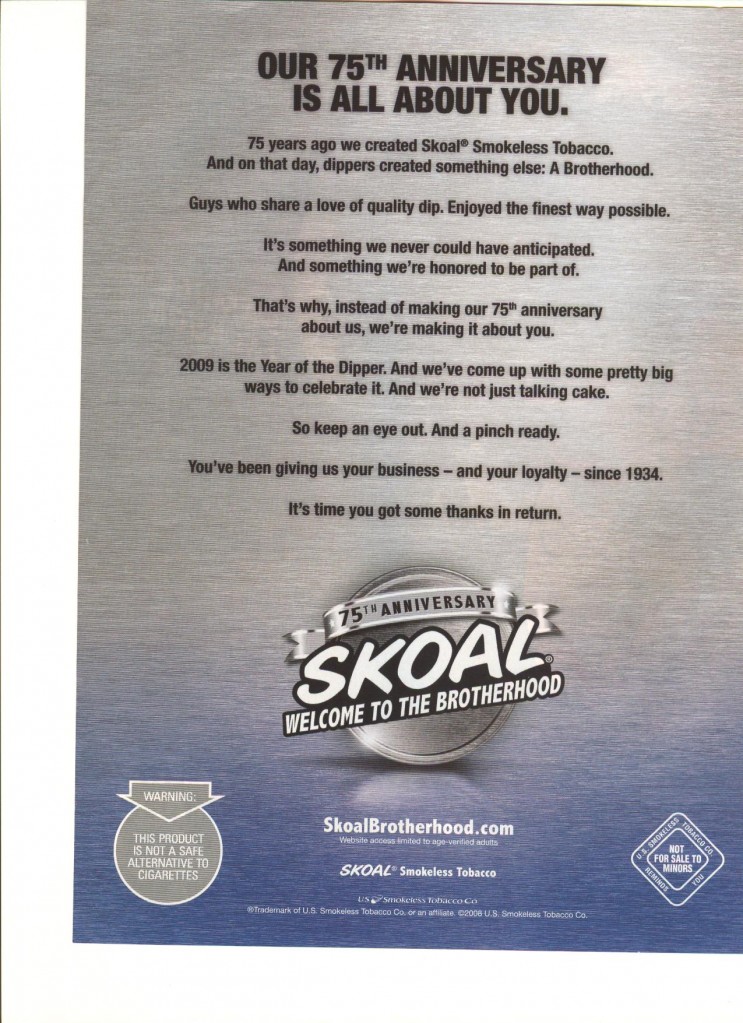 OUR 75th ANNIVERSARY IS ALL ABOUT YOU.

75 years ago we created Skoal Smokeless Tobacco.  And on that day, dippers created something else: A Brotherhood.

Guys who share a love of quality dip.  Enjoyed the finest way possible.
It’s something we never could have anticipated.  And something we’re honored to be a part of.
That’s why, instead of making our 75th anniversary about us, we’re making it about you.

2009 is the Year of the Dipper.  And we’ve come up with some pretty big ways to celebrate it.  And we’re not just talking cake.
So keep an eye out.  And a pinch ready.
You’ve been giving us your business — and your loyalty — since 1934.
It’s time you got some thanks in return.

SKOAL
WELCOME TO THE BROTHERHOOD

Your discussion of "American" raises an interesting question. Viz whether the race fallacy, that is the observation that there is more genetic variation within a given "racial" population than there is between such groups, also applies at the cultural level.

Exercise: Try to look at a given cultural difference, let's say the number of gods believed in - 1 or 3 - and find the unifying thread. Theism. Traditional dance and cuisine may vary, but we all love movement and dining. Tastes like sociology!

Kurt Vonnegut explores this idea in Cat's Cradle - I teach it every semester in my intro to lit course. I might just have to incorporate this ad and others like it - what an interesting way to show how ideas in literature play out in the real world.

"Guys who share a love of quality dip."... Because only guys dip? I'm sure that there are a few women who do. They just aren't invited to the party.

Years ago, when I was still a smoker, my aunt told me (referring to my uncle) "When you quit smoking, make sure you don't take up chewing instead, because it's even more disgusting." Ha!

This concept is very messy.

1. Lumping all Americans, tobacco chewers, blacks, gays, religious terrorists, or whatever together and simply labeling each an imagined community unnecessarily discards the richness that defines the nature of allegiances within each of these different groups. Why ignore variance?

2. Anderson seems to be defining a real community in terms of whether its group members will ultimately have direct contact with each other so he can contrast it with other, larger groups he can then call imagined. Deny his definition of real community and it all falls apart.

Ultimately the term "imagined community" may serve more to confuse and simplify than educate.

I'd much rather study what dimensions people form their sense of allegiances on. Family, locale, country, religion? Sure. Tobacco chewing and cross continental economic status? I doubt it.

Anderson may be barking in the right forest, but up the wrong tree...