American divisions over the state of our country’s race relations were brought to the forefront in the aftermath of Mike Brown’s shooting by a Ferguson, MO police officer named Darren Wilson. Black Americans are more than twice as likely as whites or Hispanics to say that the killing was part of a broader pattern (source).  And blacks are twice as likely as whites to say that race played an important role in Wilson’s decision to shoot (source).

At The Atlantic, Robert Jones argues that these disparate opinions may be caused, in part, by the different life experiences of the typical white and black American. He shows data, from the American Values Survey, indicating that black people are much more likely than whites to report living in communities rife with problems, from a lack of jobs and inadequate school funding to crime and racial tension.

In the meantime, whites may be genuinely naive about what it’s like to be black in America because many of them don’t know any black people.  According to the survey, the average white American’s social network is only 1% black.  Three-quarters of white Americans haven’t had a meaningful conversation with a single non-white person in the last six months. 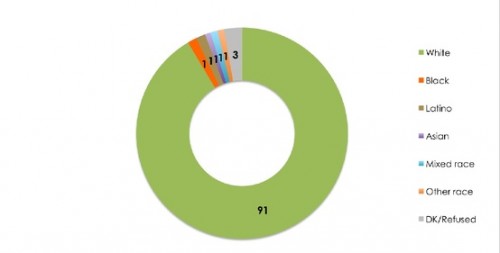 In contrast, the social network of the average black American is 65% black and, among Hispanic Americans, 46% Hispanic.

The average white person’s failure to engage meaningfully with people of color isn’t solely a matter of personal choice, though that is certainly part of it.  Nor is it simply a function of the country being majority white, non-Hispanic (but not for long).  White insularity is caused, too, by occupational and residential segregation which, in turn, is the result of both individual choices and institutionalized mechanisms that keep black people in poverty and prison.

If we want the people of America to embrace justice, we must make our institutions just.

Only one percent of the average white American's social network is Hispanic? That had got to vary quite a bit by region. I'm not sure that would be true for the average New Yorker, Californian, Texan, etc. It must be a monumental effort to dodge every Hispanic in coastal cities like Miami or San Diego or what have you

I looked at my Facebook friends and 21% of them are non-white. This seemed like a small amount to me, but comparatively, it is.

Two points. First, the link to the Atlantic article seems to be broken.

Second, and more substantively, I'm not sure I buy how the Atlantic extrapolates from the data to the "makeup of White social networks". I think it's a bit misleading, actually. Here's the key methodological tidbit:

"Drawing on techniques from social network analysis, PRRI’s 2013 American Values Survey asked respondents to identify as many as seven people with whom they had discussed important matters in the six months prior to the survey. The results reveal just how segregated white social circles are."

So, we know that 91% of white respondents' top seven confidants are white. That's an important finding, but it's not quite the same thing as saying that whites' social networks are 91% white (or only 1% black) as most people understand the term. As I understand it, in response to such questions, people mostly reported partners and family for their confidants. But I would guess that people's friend networks are, on average, more diverse than their family and partners. So I'm not sure this works as a measure of overall social network.

Of course, it's still disturbing how few white respondents reported a non-white person in their closest set of friends, but it's not quite the same thing as saying that their social network is only 1% black. For that, we'd probably want data from something like Facebook or a list of everyone you've spent a social evening with in the past year or somesuch. I'm guessing someone has looked at just those kinds of data, and I'd love to hear what they found.

Where I live, the demographic is quite literally 96% white. So, I'm sure I'd show up as someone with a mostly white social circle, but it's due to circumstances, not choice. If you were to explore tumblr blogs I follow and such, it would be much more balanced, but those aren't people that I actually know or that you could say I had an "important conversation" with.

So some unnamed but apparently very powerful institutions are unjust because they are keeping black people poor and in prison, and if they weren't so unjust then white people would have a lot more non-white friends (including hispanics and asians too, I guess - even though hispanics and asians aren't being kept in poverty and in prison by these unnamed powerful institutions....???)

No offense, but this argument is incoherent.

"In the meantime, whites may be genuinely naive about what it’s like to be black in America because many of them don’t know any black people. "

You don't have to know any black people to listen to what black people are saying about what it's like to be black in America. Not so much genuine naivete as being deliberately obtuse.

Since only 11.7% of Americans are black, how are we going to "make our institutions just"? Perhaps we could order every black to make friends with 1 Latino, 1 mixed race and 7 whites? If he choose to increase the number of any group, he will face fines and or jail time if he does not increase the other groups proportionately.

Can we just stop the nonsense of extrapolating data collected under certain premises into other premised arguments. Wouldn't it make more sense to conduct a study specific all to answer whatever social bias are being postulated? After all the missing data is pretty important as well. Religion, education status and other circles, etc. These types of postings don't add anything to the conversation because there's too much unknown. An example would be my social media circles which is heavily dominated by family, very close friends and some business contacts is probably ~2 % black, 0% Asian and 2% Hispanic. If I analyze my influence circle, for which I may or may not use social media (e.g., texting, direct phoning and email), then the percentages change dramatically ~ 15-20% black, 2& Asian and 2% Asian. This is not naiveté about social conditions, but choices made during interpersonal contact that either result in continuing contacts or not.
Remember friendship circles are determined by interpersonal relations, not quotas or social pressures.

[…] go forward I needed to add an update to the earlier lectures on racial segregation. The article The Average White American’s Social Network is 1% Black is fascinating and not a little sad because of its […]

That was definitely a beautiful post with a clean discussion on using social networks in american countries but yes, fmwhatsapp apk free is the one and only social messaging app which is leading one in most of the world's famous countries such as america, etc.