Watch London Cops Subdue, Not Kill, a Man Yelling and Swinging a Machete

Despite the cellphone video of two police officers killing Kajieme Powell, there is some dispute as to what happened (see this account in The Atlantic). Was Powell threatening them; did he hold the knife high; was he only three or four feet away? The video is all over the Internet, including the link above. I’m not going to include it here.  The officers get out of the car, immediately draw their guns, and walk towards Powell. Is this the best way to deal with a disturbed or possibly deranged individual – to confront him and then shoot him several times if he does something that might be threatening?Watch the video, then watch London police confronting a truly deranged and dangerous man in 2011.  In St. Louis, Powell had a steak knife and it’s not clear whether he raised it or swung it at all.  The man in London has a machete and is swinging it about.

Unfortunately, the London video does not show us how the incident got started. By the time the recording begins, at least ten officers were already on the scene. They do not have guns. They have shields and truncheons. The London police tactic used more officers, and the incident took more time. But nobody died.  According to The Economist:

The article includes this graphic: 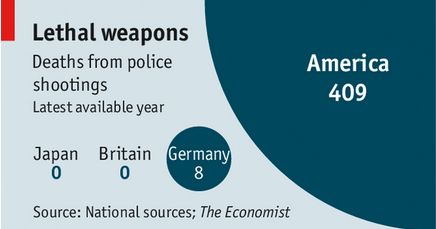 I’m sure that the Powell killing will elicit not just sympathy for the St. Louis police but in some quarters high praise – something to the effect that what they did was a good deed and that the victims got what they deserved. But righteous slaughter is slaughter nevertheless. A life has been taken.<

You would think that other recent videos of righteous slaughter elsewhere in the world would get us to reconsider this response to killing. But instead, these seem only to strengthen tribal Us/Them ways of thinking. If one of Us who kills one of Them, then the killing must have been necessary and even virtuous.

Isn't London where that guy was beheaded by Muslim extremists with knives?

wow. look at that. lots of cops, and nobody had to get shot to resolve the stand-off.

Sad stats for sure, highlighting a real need for change, but sadder still when presented selectively and without context.

Also, it is estimated that between 1/3 and half of Americans own guns.

It can be argued that the police are a reflection of our society and while we cannot condone undue violence by police, it is incumbent on us to eschew simplistic explanations (or in the case of this post no explanations at all) and seek solutions in context with the complexity of the phenomena.

No right answer. Sadly many knife wielding subjects seriously injure bystanders because police wasted time trying to talk him down. Pull up " drop the knife ". As soon the subject tries to hurt someone else or rushes anybody including a cop sadly deadly force can be used. Many cops have died even after shooting subject multiple times . Subject can cover 21 feet in two seconds and have plunged knives into police. Just imagine if machete man bolted into the store and took hostage or killed someone? Imagine how the police would have to explain that ... Yes he was in front of us but we were trying to talk him down .

Japan is full of Japanese people.

Unarmed police are a symptom of a society that devalues the life of each and every police officer in their nation.

The civilians have a right to exist and so we must also respect the life of the law enforcement officers by allowing them the proper weapons to defend their own existence on the job.

In the USA, cop shows up, pulls gun, says I ain't got time for this crap it's cutting into my donut time, BANG, BANG, BANG...........Bang, bang, bang, unloads clip in them, reloads, unloads another clip, walks up to them on the ground, kicks them a few times in the head, puts cuffs on them, then kicks them some more. Tells everyone he was afraid for his life.