The Tuskegee Syphilis Experiment is one of the most famous examples of unethical research. The study, funded by the federal government from 1932-1972, looked at the effects of untreated syphilis. In order to do this, a number of Black men in Alabama who had syphilis were misinformed about their illness. They were told they had “bad blood” (which was sometimes a euphemism for syphilis, though not always) and that the government was offering special free treatments for the condition. Here is an example of a letter sent out to the men to recruit them for more examinations: 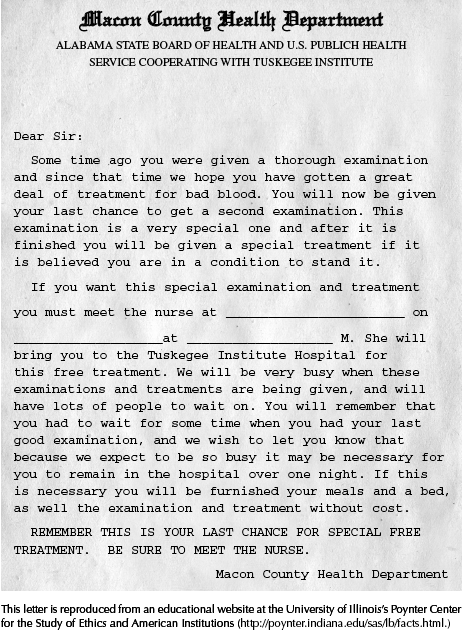 The “special free treatment” was, in fact, nothing of the sort. The researchers conducted various examinations, including spinal taps, not to treat syphilis but just to see what its effects were. In fact, by the 1950s it was well established that a shot of penicillin would fully cure early-stage syphilis. Not only were the men not offered this life-saving treatment, the researchers conspired to be sure they didn’t find out about it, getting local doctors to agree that if any of the study subjects came in they wouldn’t tell them they had syphilis or that a cure was available.

The abusive nature of this study is obvious (letting men die slow deaths that could have been easily prevented, just for the sake of scientific curiosity) and shows the ways that racism can influence researchers’ evaluations of what is acceptable risk and whose lives matter. The Tuskegee experiment was a major cause for the emergence of human subjects protection requirements and oversight of federally-funded research once the study was exposed in the early 1970s. Some scholars argue that knowledge of the Tuskegee study increased African Americans’ distrust of the medical community, a suspicion that lingers to this day.

In 1997 President Clinton officially apologized for the experiment.

According to the latest annual report of the Centers for Disease Control and Prevention (CDC), the ancient sexually transmitted disease is looming as a serious new threat to the health especially of gay and bisexual men. For more information visit here Syphilis: From Near Zero to a Big Threat

[...] 1932-1972, looked at the effects of untreated syphilis. In order to do this, a number of Black Read More|||The Tuskegee Syphilis Experiment. The United States government did something that was [...]

Wrong! A human is a human, no matter the color of their skin!!!

Eugenics at it's finest. Sick!!!

Simple question... why is no one suspect of the government wanting to offer the nation free healthcare when the same government did this to poor black men, and their families?

We have a responsibility as human beings to be aware of studies going on in our communities and to ask the questions that will give us answers and to challenge what we don't understand or agree with.

I find it strange,peculiar and extremely suspect that in all this time NO ONE has named or knows a single woman that died in Tuskegee from this disease at that time from any of those men.I find it very suspect that these men in that small town in that moral time were that promiscuous and no one woman was found to have given this SEXUALLY transmitted disease to them .I also find it odd that nurse Mary Starke Harper,an intern at that time,who wrote a letter of apology for her part in injecting these men with what she thought was the virus, is never mentioned in any articles pertaining to this study.I guess to the govt. it is one thing to say they were not treated...it's another thing to state that you injected them.After all, what good is a study without subjects? My grandfather died in this study.My grandmother was a health and wonderful woman who lived a full life.I wonder how many women,after their husbands deaths,believed that the loving hardworking husband that she loved,was unfaithful? I don't.

at the risk of sounding racist, why do you suppose so many blacks today trust the government emphatically, and reply on them for many of their needs (not the majority of blacks you understand, but by in large, they all vote for the party that promises them the most hand outs).
When will people wake up and realize the government has over stepped its role and they are not to be trusted by in large?

Correction, these Black Men did not have Syphilis to began with, THEY WERE INJECTED WITH THIS BY THE GOD DAMN BEAST!!!!!

Let's all keep in mind that "the government" are people, citizens and in this case medical professionals. They're not alien invaders. They're our neighbors; our brothers. They're us.

At the same time these studies were being conducted citizens in another country were mass murdering Jews, and a hundred years before in America citizens were perpetuating slavery and arranging for the genocide of Indians.

Look at Putin today, look at the Middle East.

There's a common denominator here What these people do is look themselves in the mirror and say "it's just my job."

There are many levels and institutions of "government." It is silly to paint with a broad brush. Let's try to be specific in our finger-pointing.

The Poynter Center is at Indiana University, not the University of Illinois.

Here's the page about it on the Tuskegee University webpage. I didn't realize that the university was still in existence.

International students do not only get a happy studies in foreign life, they have to write different assignments https://www.academicsaviour.com/project-dai-xie in order to achieve their qualifications. Maybe all foreign students realize that it is harder than ordinary tasks to complete academic projects. This kind of project includes expertise in writing, persuasion, decision-making and problem solving, but also outstanding analytical and imaginative skills for a successful project to finish.

[…] so easy you don’t want to even have a sample. Just sit down and do some good buy college essays your input here online in the evening. On one of those slow days, you need nothing more than an easy definition […]

[…] to understand what kind of article it is, its background, what functions it performs; what actually click this link here now it is needed for. Having answers to above questions, you will be able to write an in-depth and […]

[…] designs that want a serious pop of content here and there. For when you want your inner artist to pop over to this website shine through, turn to a cursive font that looks like you brought your paint brush to the game. For […]

Amazing article, learned a thing a two, visit shampoo and conditioner manufacturers and checkout our website, to learn about shampoo manufacturing and trading.