Bathing Suit Fashion and the Project of Gender

I came across this ad for bathing suits from the 1920s and was struck by how similar the men’s and women’s suits were designed.  Hers might have some extra coverage up top and feature a tight skirt over shorts instead of just shorts but, compared to what you see on beaches today, they are essentially the same bathing suit. 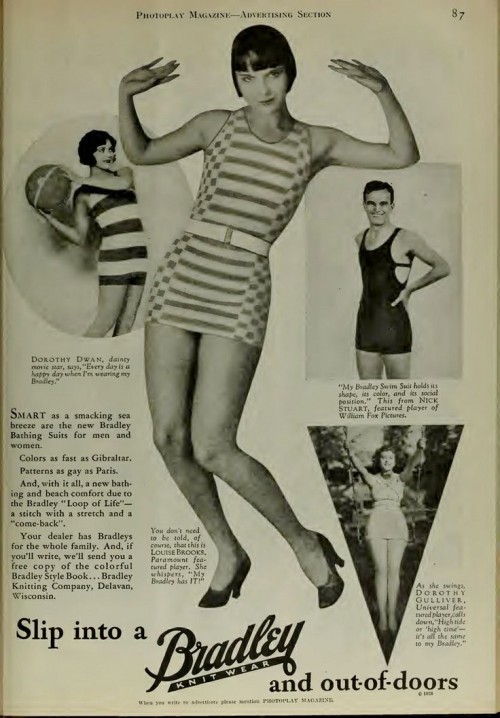 So, why are the designs for men’s and women’s bathing suits so different today? Honestly, either one could be gender-neutral. Male swimmers already wear Speedos; the fact that the man in the ad above is covering his chest is evidence that there is a possible world in which men do so. I can see men in bikinis. Likewise, women go topless on some beaches and in some countries and it can’t be any more ridiculous for them to swim in baggy knee-length shorts than it is for men to do so.

But, that’s not how it is.  Efforts to differentiate men and women through fashion have varied over time.  It can be a response to a collective desire to emphasize or minimize difference, like these unisex pants marketed in the 1960s and 70s.  It can also be, however, a backlash to those same impulses.  When differences between men and women in education, leisure, and work start to disappear – as they are right now – some might cling even tighter to the few arenas in which men and women can be made to seem very different.

If memory serves, until sometime in the 1930s men were thought to have "breasts" rather than "chests" and therefore expected to keep them covered. The "scandalous" thing about "It Happened One Night" was not just the Wall of Jericho, but Clark Gable's removal of his undershirt.

I know quite a few young women who wear board shorts with their swimsuits - often buying them from the boys' clothing section because they are cheaper and will still fit them (unlike the men's).

Interesting that the second set of unisex pants only come in waist sizes 24-34 inches. Not gonna fit many dudes nowadays!

Both nature and nurture are relevant to how men and women differentiate themselves from each other. If you focus too much on nurture you'll always miss something.

Differences is dress speak to our needs to attract each other in different ways. I see that as natural.

Just stumbled on this neat collection of over a hundred vintage photos of women and men in beach attire:

One of the most important reasons for men to wear over-the-shoulder swimsuits in the 1930s was the unreliability of elastic in sea water. The natural materials out of which the costumes were made - cotton or wool - were knitted to provide flexibility. Anyone who has hand washed a wool sweater knows how much water such materials hold and how heavy they can be when wet. A belt that was up to the job of making sure a pair of shorts stayed in place would have to be too tight for comfortable swimming so the only answer would have to be halter straps.