Who Are Habitats For? Electrified Nature in Zoo Exhibits

What do you see? 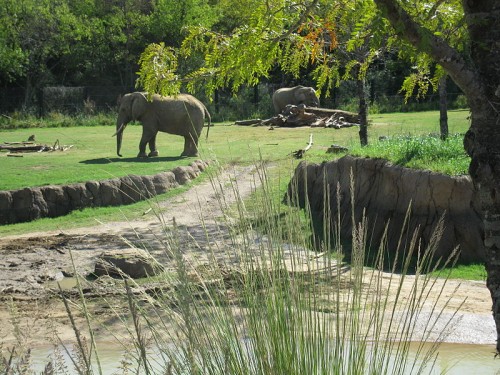 While it hasn’t always been the case, most well-funded zoos today feature pleasant-enough looking habitats for their animals.  They are typically species-appropriate, roomy enough to look less-than-totally miserable, and include trees and shrubs and other such natural features that make them attractive.

How, though, a friend of mine recently asked “does that landscaping stay nice? Why don’t [the animals] eat it, lie down on it, rip it to shreds for fun, or poop all over it?”

Because, she told me, some of it is hot-wired to give them a shock if they touch it. These images are taken from the website Total Habitat, a source of electrified grasses and vines. 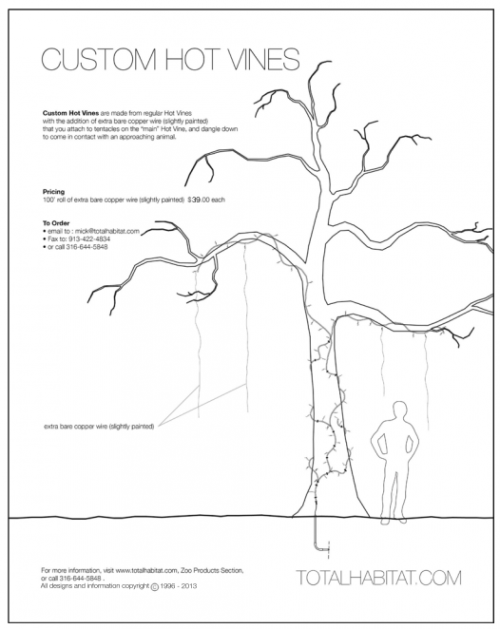 Laurel Braitman writes about these products in her book, Animal Madness.  When she goes to zoos, she says, she doesn’t “marvel at the gorilla… but instead at the mastery of the exhibit itself.”  She writes:

The more naturalistic the cages, the more depressing they can be because they are that much more deceptive. To the mandrill on the other side of the glass, the realistic foliage that frames his favorite perch doesn’t help him one bit if it has been hot-wired so that he doesn’t destroy it… Some of the new natural looking exhibits may be even worse for their inhabitants than the old cement ones, as the new plants and other features can shrink the animals’ usable space.

The take-home message is that these attractive, naturalistic environments are more for us than they are for the animal.  They teach us what the animal’s natural habitat might look like and they soothe us emotionally, reassuring us that the animal must be living a nice life.

I don’t know the extent to which zoos use electrified grasses and vines, but next time you visit one you might be inspired to look a little more closely.

Photo of elephants from wikimedia commons.

What is needed is hot wires to control homo sapiens sapiens

I'd like to offer a fuller picture of the use of hotwire in zoos. While it is true that many naturalistic enclosures use hotwire to prevent destroying some of the vegetation, zoos work hard to provide lots of additional browse (leafy branches from trees and bushes) to animals, so the animals have lots of opportunity to consume fresh vegetation daily. They are not sitting in a forest unable to eat anything green, as this article implies. We even use dozens of potted plants that are placed in holes and replaced as the animals consume them. Keeping a shade tree alive is important too - a bare and sun-baked habitat isn't much fun for the animals, either.

Most hotwire is mild - more like licking a battery than getting a real shock, and designed to be a mild deterrent. Some hotwire is stronger, especially if it is protecting the public from a dangerous animal (tops of tiger walls, etc.), or if the animal itself has a thick hide and therefore can't feel a more mild (to us) shock. A strong shock to a human may be barely felt by a zebra, and so a human who accidentally brushes some zebra hotwire may think it is very strong! Hotwire is often used by backyard farmers who raise goats and chickens - it is considered a very humane way to enclose animals.

Sociological Images readers (of which I have been one for many years) are aware of how judgmental humans have been when approaching cultures in ignorance, only to have first impressions changed with greater understanding. Come spend some time in zoos working with both the animals and the staff, and you'll understand why what we do works, and how it is constantly evolving and improving. At first glance, some practices may seem barbaric, and indeed, it is easy to make us sound primitive and ignorant - we are painted with this brush on a regular basis by folks who don't understand what we do or why we are doing it. But, get to know us and see the work we are doing conserving species, providing education, and supporting the care of our own and wild animals and you'll see a difference.

Zoos should not exist. There are no excuses, no explanations that make them acceptable. They are cruel and inhumane.

[…] Who Are Habitats For? Electrified Habitats in Zoo Exhibits […]

Zoos are a way for making HUMANS care about wild animals.
Think of Seaworld. Come and pet the dolphin.
What you touch, you end up caring more about.
PROXIMITY IS EMPATHY.

No more dolphin shows equals the dolphins ending up in the fish section of your local supermarkets.

DO you HONESTLY think that people give a royal frickken thought of care about some smelly warthog or a hippo or a mongoose? If they don't care, then they eat it or kill it. So what is the true purpose of a zoo? COMPASSION FOR ANIMALS.

Without zoos, the animals would be just "distant deaths of creatures we care nothing about". With zoos, these living breathing creatures are GOODWILL AMBASSADORS TO THE HUMANS. Think of it to be a "necessary pain" for a far greater good. If wild gorillas ruled the world, do you think they'd build zoos for the humans or even care about humans? Giving compassion to something that will never reciprocate is valid if the creature might have some value in the future.

How many INSECT ZOO locations have you visited? Because they are not cute or furry or interesting. There are natural limits to even the boundless human compassion.