Why Can’t Conservatives See the Benefits of Affordable Child Care?

Ross Douthat is puzzled. He seems to sense that a liberal policy might actually help, but his high conservative principles and morality keep him from taking that step. It’s a political version of Freudian repression – the conservative superego forcing tempting ideas to remain out of awareness.

In his column, Douthat recounts several anecdotes of criminal charges brought against parents whose children were unsupervised for short periods of time.  The best-known of these criminals of late is Debra Harrell, the mother in South Carolina who let her 9-year-old daughter go to a nearby playground while she (Debra) worked at her job at McDonald’s. The details of the case make it clear that this was not a bad mom – not cruel, not negligent. The playground was the best child care she could afford.

One solution should be obvious – affordable child care.  But the U.S. is rather stingy when it comes to kids. Other countries are way ahead of us on public spending for children. 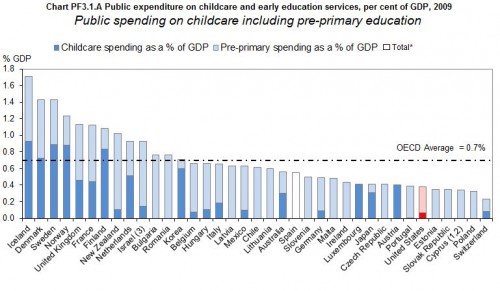 Conservatives will argue that child care should be private not public and that local charities and churches do a better job than do state-run programs. Maybe so. The trouble is that those private programs are not accessible to everyone. If Debra Harrell had been in France or Denmark, the problem would never have arisen.

The other conservative U.S. policy that put Debra Harrell in the arms of the law is “welfare reform.”  As Douthat explains, in the U.S., thanks to changes in the welfare system much lauded by conservatives, the U.S. now has “a welfare system whose work requirements can put a single mother behind a fast-food counter while her kid is out of school.”

That’s the part that perplexes Douthat. He thinks that it’s a good thing for the government to force poor women to work, but it’s a bad thing for those women not to have the time to be good mothers. The two obvious solutions – affordable day care or support for women who stay home to take care of kids – conflict with the cherished conservative ideas: government bad, work good.

This last issue presents a distinctive challenge to conservatives like me, who believe such work requirements are essential. If we want women like Debra Harrell to take jobs instead of welfare, we have to also find a way to defend their liberty as parents, instead of expecting them to hover like helicopters and then literally arresting them if they don’t.

As he says, it’s a distinctive challenge, but only if you cling so tightly to conservative principles that you reject solutions – solutions that seem to be working quite well in other countries – just because they involve the government or allow poor parents not to work.

Conservatives love to decry “the nanny state.”  That means things like government efforts to improve kids’ health and nutrition. (Right wingers make fun of the first lady for trying to get kids to eat sensibly and get some exercise.)

A nanny is a person who is paid to look after someone else’s kids. Well-off people hire them privately (though they still prefer to call them au pairs). But for the childcare problems of low-income parents, what we need is more of a nanny state, or more accurately, state-paid nannies.

Yep How much child care can a single parent making minimum wage to $13 an hour buy? Not much. Note that before Oklahoma went totally red it passed a funded preschool program that has and continues to be a huge success. I do not know if it is now under seige politically but would be suprised if it is not.

One thought about this passage: "a good thing for the government to force poor women to work, but it’s a bad thing for those women not to have the time to be good mothers. The two obvious solutions – affordable day care or support for women who stay home to take care of kids.."

If the government should exert force, it should compel the child's father to provide sufficient child support. People ought to be responsible for their own decisions, so they are incentivized to make good ones.

Historically Americans have been reluctant to accept the ideas of foreigners, e.g., Bismarck created a national welfare system in the German Empire during the 1880s! Sickness Insurance in 1883, Accident Insurance in 1884, and the Old Age and Disability Insurance in 1889. It was not until the late 1930s that FDR and his supporters in Congress were able to create Social Security.

Because it is a conservative agenda to have individual women financially dependent on, and therefore under the control of, individual men. The conservative solution to this problem is to economically force women to get married, stay home, and then make do with whatever money the husband brings in or not. If it's not enough, then too bad, shrug.
Conservatives don't care about children. They just use children to justify the patriarchal family, where women and children are under the control of the patriarch.

[…] the real consensus turns out to be further along the curve; math is a harsh reality; damned if you work, damned if you don’t; and the cat that rides the […]

Yeah! Dr. Jay is at it again: impugning the motives of those he disagrees with, stoking partisan fires, and selecting stats that suit his needs while ignoring those that don't. This is academia?

Quick example: the doctor cites low US spending per GDP from a 3-page OECD study while the same 3-pager shows a very respectable level of spending on child education when the dollars are "per child". Why hide that Jay???

Sure a number of smaller countries spend more and there are some who fund child care better, but show the data instead of playing with your students.

The foreign countries who subsidize child care, and have other social benefits such as paid parental leave (maternal and paternal) fork over 50% or more in taxes each year. Not many people in the U.S. (liberal or conservative) would go along with a flat tax rate of 50%.

They aren't really able to adequately address the moral problem, but they do satisfy their main goal - keep poor people who have children while they're poor, poor.

There's been a fair amount of discussion in places where I read about the idea that was stated clearly by Bertrand Russell a century ago: (quote) “If a person is offered a fact which goes against his instincts, he will
scrutinize it closely, and unless the evidence is overwhelming, he will refuse
to believe it. If, on the other hand, he is offered something which affords a
reason for acting in accordance to his instincts, he will accept it even on the
slightest evidence.” This shows up when people with solid scientific backgrounds deny specific scientific observations when those observations contradict a given political theory, or, as in this case, the actual evidence that government-sponsored day care is actually profitable to the state, because of the reductions in harm later in the life of that child. But, "taxes are bad" trumps any idea for too many people. We've lost the idea that " the state" is actually all of us, trying to work out how to balance the interests of everyone. You can't have an actual society if enough people decide they don't want to take part. All you get is Hobbes' "short, brutish and nasty" life. But, apparently, a lot of people want that, or else, can't think far enough ahead to realise that they are destroying their own lives. What is it with Americans that they can no longer see that we're all in this together?

It looks like SC does have government funded child care. Go figure.

So, maybe more government money spent for child care wouldn't have helped in this case.

"Why, it's almost like we set up a lose/lose system! Crazy!"

[…] Jay Livingston over at Sociological Images, […]

Right wing plutocrats and oligarchs are not conservatives. Conservatives adhere to the fundamental ideology of their society and nation. The fundamental ideology of the United States is inherently liberal, derived as it is from the philosophies of Locke, Hobbes, Rousseau, and, especially, Mills. Three of the core documents that express our fundamental ideology are the Declaration of Independence, the Preamble of the Constitution, and the Gettysburg Address. You cannot be an American conservative if your ideology is not in line with the principles expressed in those documents.
These inappropriately styled "conservatives" are adamant proponents of "law and order" while forgetting that it is justice that our society is supposed to establish and promote. They are all for providing for the common defense as long as it need not be paid for from their taxes. And they entirely forget to promote the general welfare in favor, Ayn Rand-like of promoting the privileged individual's welfare. As for securing the Blessings of Liberty to ourselves and our posterity, those blessings should only be available to those who can afford them. That is not conservatism, it is selfish arrogance.
A conservative believes in a quality public education system because it is the best way to ensure the successful continuity of our society. A conservative believes in affordable, single-payer, healthcare because it cheaper and provides better results than the market driven, private healthcare that our society has had, or the ridiculous mash up of mandated, market driven, healthcare that is now the law. No conservative believes that more than a quarter of our nation's annual revenues should be spent on the mechanisms of war simply to keep a segment of our economy, artificially, in business.
The faux conservatives spew "let the market decide" but they then want working people to pay an inordinate amount of their tax burden on public assistance checks to the war industry, large agricultural corporations whose frankenfood poisons our citizens, and an amok pharmaceutical industry.
No conservative believes that corporations are people, nor that corporations, business enterprises created to limit liability for the people who invest in them, have the innate and constitutional rights of actual people.
Conservatives will spend a dollar now to save scores of dollars over the next decade, and not pretend to adhere to some principle of self sufficiency that allows them to ignore the plight of working persons and families trying to balance family and work in a society that has increasingly, over the last forty years, sought to change the status of both white and blue collar workers to little more than serfs in corporate fiefdom.

Arch right wing propagandist Ann Coulter complained of the low quality of the immigrants the US presently attracts, and stated that we need to attract a better class (working class) of immigrant; but she failed to realize that the nations from who we used to attract those working class immigrants now send us mainly wealthy tax dodgers looking to avoid their home nation's more onerous income taxes while the working classes in those nations enjoy better standards of living, higher quality food, better educational opportunities for their children, and longer and healthier lifespans than their counterparts in the United States. All because their home nations have adopted America's promise of promoting the general welfare and looking to the continuity of their society while a few plutocrats in the United States have put the corporate wealth they control toward bribing our law makers and senior judges into making it easier for them to make the measure of their virtual manhoods by the size of their investment portfolios rather than what is actually in their pants.