Caveman Courtship and its Mythology

Somewhere we got the idea that “caveman” courtship involved a man clubbing a woman over the head and dragging her by the hair to his cave where he would, presumably, copulate with an unconscious or otherwise unwilling woman.  This idea, as these two products show, is generally considered good for a chuckle. 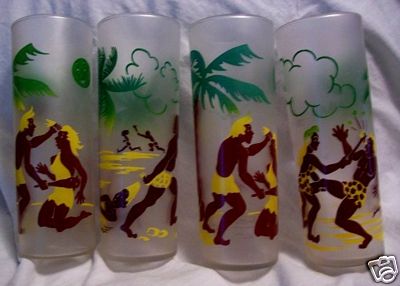 (glasses sent in by Cole S.H.) 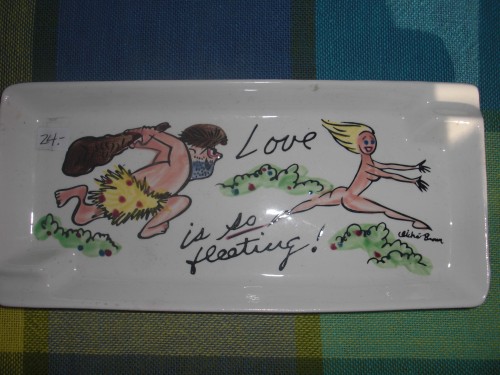 (tray for sale at the Rose Bowl Flea Market, photo by me)

Of course, we have little to no knowledge of the social lives of early humans.  First, long buried bodies and archeological dig sites simply can’t tell us much about how men and women interacted.  Second, to speculate about early humans based on humans today is to project the present onto the past.  To speculate about early humans based on today’s apes is (at least) as equally suspect.  Ape behavior varies tremendously anyway, even among our closest cousins. Which type do we choose?  The violent and hierarchical chimp or the peace-loving Bonobos who solve all social strife with sex?

In other words, the caveman-club-‘er-over-the-head-and-drag-her-by-the-hair narrative is pure mythology. The mythology, nonetheless, affirms the idea that men are naturally coercive and violent by suggesting that our most natural and socially-uncorrupted male selves will engage in this sort of behavior.  Rape, that is.

The idea also affirms the teleological idea that society is constantly improving and, therefore, getting closer and closer to ideals like gender equality.  If it’s true that “we’re getting better all the time,” then we assume that, whatever things are like now, they must have been worse before.  And however things were then, they must have been even worse before that.  And so on and so forth until we get all the way back to the clubbing caveman.

Thinking like this may encourage us to stop working to make society better because we assume it will get better anyway (and certainly won’t get worse).  Instead of thinking about what things like gender equality and subordination might look like, then, we just assume that equality is, well, what-we-have-now and subordination is what-they-had-then.  This makes it less possible to fight against the subordination that exists now by making it difficult to recognize.

The idea of caveman courtship, in other words, seems silly and innocuous.  But it actually helps to naturalize men’s aggressive pursuit of sex with women.  And that naturalization is part of why it is so difficult to disrupt rape myths and stop rape.

Originally posted in 2008 and cross-posted at Ms. magazine.

Here's some light reading for Christmas:

I think there is an element of the duality of Christianity in the idea that without societal (or religious) intervention men are naturally coercive and violent. An example of why Christianity is so "necessary" and also an excuse for the shadow side of all that sexual control.

My biggest problem isn't even the way in which this kind of thing promotes totally unverifiable myths, but about how if these images are supposed to be funny and cute, so is domestic violence and rape. Far too many people, clearly, think that violence against women is cute.

I think it also has something to do with the idea that primitive societies (in Africa, say) are culturally similar to humanity's earliest forebears, coupled with the widespread colonialist perception of "savage" peoples as having no real affection between men and women (this line was very common; only WEstern husbands and wives really loved each other). It's a complicated story, of course, but you can find plenty of examples in early anthropological writing about Africa of both steretypes, so it's not so strange to think of how racist notions about "savage" peoples in the 1930's, say, would influence the ways we imagine "primitive" people at the fabled dawn of man.

Zungu - seeing as the whole concept of romantic love is a fairly modern invention, I wouldn't say it's preposterous to say that some cultures don't have that concept. They probably have affection, but not the same notion of "love" that is popularized in the pop culture of the last several hundred years.

Sociological Images » Waking Up To The Link Between Violence And Sex — July 2, 2009

[...] well as the possibility that we could become increasingly intolerant in the future.  As I wrote in a previous post about cavemen: There are serious problems with this idea:  (a)  We may stop working to make society better [...]

There's also the problem of assuming a single "caveman" culture. Early humans would've been just as diverse in their cultures as modern humans. Quite probably there *were* some early cultures that had very heavily misogynistic practices, with rape being accepted as the norm. But just as probably there were cultures were far more egalitarian.

[...] well as the possibility that we could become increasingly intolerant in the future.  As I wrote in a previous post about cavemen: There are serious problems with this idea:  (a)  We may stop working to make society better [...]

Honestly, from what I've seen and read about early human interaction, there was quite a lot of compassion and care involved - burial sites, healed bones, that sort of thing. To me, it isn't very far-fetched to say that early humans focused a lot on community and survival with compassion. If there was such a thing as clubbing courtship, then that would mean that humans saw women as things to be taken. But women don't just appear in the wild like gazelle - she would have belonged to another man, just like it does with recent or modern patriarchies. That would cause a lot of infighting, a massive lack of empathy and compassion, and overall, wouldn't it just all fall apart with infighting? It seems to me that there wasn't a huge imbalance in gender power back then - all you have to do is observe modern hunter/gatherer groups as a whole and extrapolate how they view who holds the community together.

Modern humans, their instincts, their cultures are all rooted from somewhere, and it's ridiculous to suggest that empathy and compassion and a sense of equality only arose in the past 100 years.

This is certainly not mythology, regardless of its truth, and I see very little to suggest that human society is "getting better" over time. One look into middle-eastern doings these days and you know that's not true...

Interestingly, I have a completely different interpretation of the caveman narrative. For me, it's not about rape or domestic violence, but a reminder of the male performance required of potential sexual partners *by most women* (socialised or however it came about) who want to "be taken" as opposed to actively take/assert their sexuality.

"Ape behavior varies tremendously anyway, even among our closest cousins. Which type do we choose? The violent and hierarchical chimp or the peace-loving Bonobos who solve all social strife with sex?"

As for this - among Bonobos it's mostly females who give sex as social glue. I actually do wonder what a human society would look like if women were freely giving sex in that way. I remember a story by a Brazilian doctor about the Musou matriarchy in China that alluded to somethine like that - men there were, in his eyes, peaceful and placated and accepting of the matriarchy, because casual sex was freely available without requiring too much intra-gender competition. His interpretation may be the perspective of someone who doesn't understand the true meaning of the cultural patterns and superimposes his own interpretation - sex as something scarce and something that women are the gatekeepers of - but it's still an interesting question.

Stronger males are almost always the dominate Sex. Civilization and education gradually changes that mindset more and more as they evolve. Societies around the world are on a "women inferiority" scale of 1-10 and range from 2-8. (IMO) Where is the US?

[…] They equate the pursuit of women as being part of their dominant expression. It’s “the caveman-club-‘er-over-the-head-and-drag-her-by-the-hair narrative which is pure mythology“. On the flipside, there are numerous women who enjoy the thrill of being chased. That is the […]

I think girls enjoy us boys' clubbing them with chivalry and attention before we lay our boys' clubs on them .Right,girls ?

[…] The ‘Caveman’ Myth (again perhaps more of a 20th century myth but an interesting one that gives the impression of man as a solitary, slightly idiotic actor who bumps woman over the head and takes her into a cave) […]

An idea that Cavemen clubbed their wives before intercourse is totally nonsensical. If the bible told the truth about Adam and Eve ,why not ask the Africans how they lived than assuming. The Bible seems to have been written to belittle Mother Continent Africa and that won't change facts about us. How many cave women died then as a result . Africans never raped,instead as men we marry as many women as we can .