On Women’s Comfort with Topless Sunbathing

What should we make of changes in fashion? Are they the visible outward expression of new ways of thinking? Or do fashions themselves influence our sentiments and ideas? Or are fashions merely superficial and without any deeper meaning except that of being fashionable?

It’s summer, and once again magazines and newspapers are reporting on beachwear trends in France, proclaiming “the end of topless.” They said the same thing five years ago. 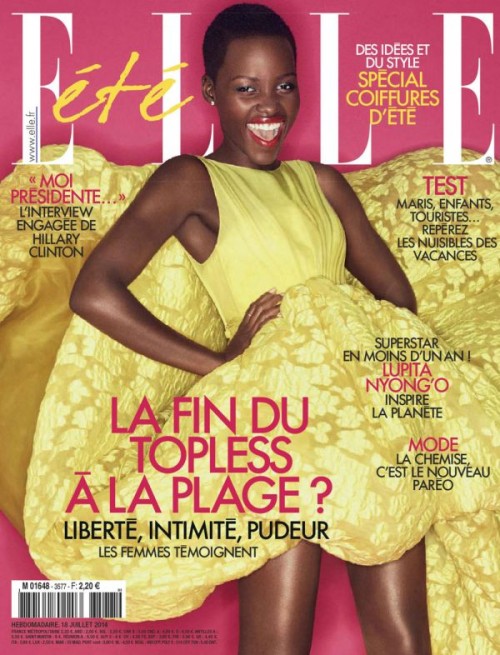 As in 2009, no systematic observers were actually counting the covered and uncovered chests on the beach. Instead, we are again relying on surveys – what people say they do, or have done, or would do.  Elle cites an Ipsos survey: “In 2013, 93% of French women say that they wear a top, and 35% find it ‘unthinkable’ to uncover their chest in public.”

Let’s assume that people’s impressions and the media stories are accurate and that fewer French women are going topless. Some of stories mention health concerns, but most are hunting for grander meanings. The Elle cover suggests that the change encompasses issues like liberty, intimacy, and modesty.  Marie-Claire says,

But aside from the question of health, how to explain the retreat from the monokini: a new modesty or a loss of the original feminist convictions? [my translation, perhaps inaccurate]

The assumption here is that is that ideas influence swimwear choices.  Women these days have different attitudes, feelings, and ideologies, so they choose apparel more compatible with those ideas.  The notion certainly fits with the evidence on cultural differences, such as those between France and the U.S. 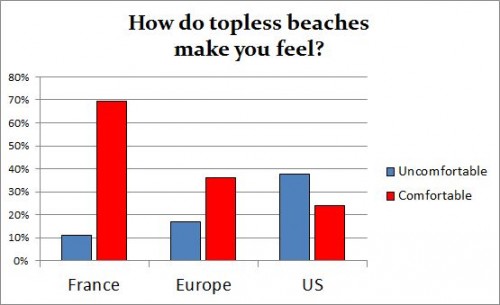 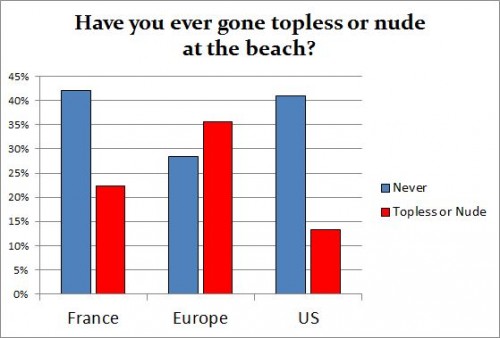 Americans are much more likely to feel uncomfortable at a topless beach. But they are also much less likely to have been to one. (Northern Europeans – those from the Scandinavian countries and Germany – are even more likely than the French to have gone topless.) (Data are from a 2013 Harris survey done for Expedia.)

This second graph could also support the other way of thinking about the relation between fashion and ideas: exposing your body changes how you think about bodies.  If people take off their clothes, they’ll become more comfortable with nudity. That is, whatever a woman’s original motivation, once she did try going topless, she would develop ideas that made sense of the experiences, especially since the body already carries such a heavy symbolism. She would not have to invent these topless-is-OK ideas all by herself. They would be available in the conversations of others. So unless her experiences were negative, these new ideas would add to and reinforce the thoughts that led to the original behavior.

This process is much like the general scenario Howie Becker outlines for deviance.

With swimwear, another motive besides “vague impulses” comes into play:  fashion –  the pressure to wear something that’s within the range of what others on the beach are wearing.

Becker was writing about deviance.  But when the behavior is not illegal and not all that deviant, when you can see lots of people doing it in public, the supportive interpretations will be easy to come by.  In any case, it seems that the learned motivation stays learned.  The fin-du-topless stories,  both in 2009 and 2014, suggest that the change is one of generations rather than a change in attitudes.  Older women have largely kept their ideas about toplessness. And if it’s true that French women don’t get fat, maybe they’ve even kept their old monokinis.  It’s the younger French women who are keeping their tops on. But I would be reluctant to leap from that one fashion trend to a picture of an entire generation as more sexually conservative.

When I visited Toronto Island with my husband, I saw that there was a nude beach and suggested we go. He is a real man of the heartland, having grown up in borderline Appalachia, so he has pretty conservative feelings about public nudity. He was reluctant and seeing a couple hemming and hawing about visiting it (and concluding they needed to get a little more drunk before entering) didn't help. It took some real convincing, but once we were on the beach and stripped, he realized it wasn't such a big deal. No one was staring at each other and it was exactly the same as a clothed beach in every other respect. He ended up enjoying himself and remarked on what a revelation it was to go nude at the beach. He's even said he would go again without hesitation. Deviant behavior definitely lead to deviant motivation in this case.

Your comment about younger French women keeping their tops on made me think of the nude beach on Fire Island near Robert Moses State Park in NY. They closed it for the most part after Sandy.

I have a feeling that here in Italy the % of women in topless on beaches is decreasing over the years. My friends and I used to go topless as long as there was another woman already without her bikini top. These days, I struggle to find such "trigger" and thus keep my bathing suit on.
I'm not sure if there is any properly recorded study of the changes over the years.

As a child, my family vacationed on an island in what is today Croatia which was mainly "nudist". Nudism wasn't officially allowed but there were just so few tourists that most probably thought "Why bother?". I have tons of photographs from that time (30 years ago) which I bet I wouldn't be able to have printed today.

In my opinion, we are moving away from nudity and back to being "covered" on the beach.

Huffington Post had a good article about topless sunbathing: http://www.huffingtonpost.com/tom-mulhall/america-topless-sunbathing_b_3825109.html In a survey, 90% of their readers supported topless beaches in the US with proper signage.

The numbers in those graphs don't add up to anywhere near 100% even though the questions are pretty binary. What am I missing there?

Here in Germany, we have perhaps the most active and mainstream culture of nudism in the world. It's completely normal for public parks, lakes, and beaches to have FKK ("free body culture") sections, and in some places such as saunas and even some dance parties, clothing is outright banned.

However, the young generation isn't all that into it. Most people under 30 associate topless/nude sunbathing with the bygone ways of their parents' and grandparents' generations. As the crowd frequenting clothing-optional areas skews more geriatric, the young are likelier to feel out-of-place or (to be blunt) rather squeamish at the sight of elderly genitalia. (Personally I think it's healthy to get used to seeing uncensored bodies in all shapes and ages instead of only encountering nudity in porno, but perhaps it took until my late twenties to realise that.) I wouldn't be too surprised if the FKK culture died out in a few decades. It's more a relic of past generations' ideals about freedom than a fashion choice.