Ten women marched in defiance of the stigma against women smoking cigarettes as part of the New York Easter Day Parade in 1929.  The interesting thing was, however, it was all a sham. The tobacco industry had set the whole thing up with the help of public relations mastermind, Edward Bernays.  American Tobacco Company President George Hill  knew cigarette sales would skyrocket if more U.S. women smoked, a behavior reserved for men in the 1920s that had closed off the female market.

Within one year of Bernay’s stint, women were smoking.

Today, similarly, Japanese fast-food has found a way to bypass the cultural stigmas that impede their profits. One food chain noticed many women would not buy their biggest-sized burgers.  The culprit was ochobo, a Japanese custom that prevents women from opening their mouth widely in public.  Small mouths are considered beautiful and opening them widely is considered “ugly” and “rude.”  The restaurant concluded that it would get into the business of “freeing women from the spell of ‘ochobo.’”

The burger chain invented a wrapper that would allow women to open their mouths larger, but not be seen: the liberation wrapper. It is a profitable tactic touted as a cultural solution. 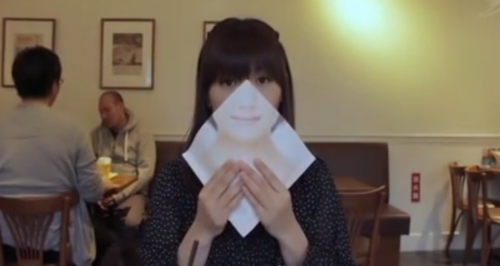 You can watch them introduce the wrapper in this short video:

The liberation wrapper was welcomed in Japanese media and social networks, spreading its popularity.  Similarly, Bernay’s public relation’s stint in 1929 garnered much of its success from the media hype that ensued then.

The approach has produced results. Sales of the Japanese chain’s biggest burgers jumped 213% after the wrappers were made because they allowed the burgers to become “socially available” to women.

Of course, the irony is that the burger chain’s “solution” isn’t actually liberating women.  By hiding the deviation behind a paper mask, it is actually reinforcing Ochobo. After all, the social reality remains — it is not acceptable for Japanese women to display an open mouth in public.

Michael Lozano is a graduate of CSULB’s Sociology Honors program and frequent contributor to NewAmericaMedia.org and VoiceWaves.org, a hyper-local news site based in Long Beach, CA.

How interesting that a google search for "ochobo" turns only results for this publicity stunt. おちょぼ口 is just "puckered mouth".

I'm not saying that there isn't a taboo against showing your open mouth, though, but that's because for over a millenium, showing your teeth in Japanese society was like showing your bones. TMI, dude. So that's why women (and aristocratic men, at times) dyed their teeth black until the 1880s (お歯黒 "ohaguro"). After all, it looks more elegant than natural, ivory yellow teeth against oshiroi makeup.

(*Note: nowadays, geisha do ohaguro when they graduate from apprentices and only if they feel particularly traditional. It's not so common, and you mostly see it in historic films. If you have some Kurosawa, try rewatching Rashomon or Throne of Blood, for example, and keep and eye on the teeth and painted-on eyebrows of the actresses)

Your points are insightful and on target. You nailed it and that's how things work.

But let's get this out of the big-bad-business/sexism arenas of argument and step it up a bit, because the underlying phenomena is much more powerful. We are talking about persuasive communications, probably the most important topic ever in the history of the human race.

All communications are designed for one thing: to elicit desired responses. Ultimately communications can be seen as a form of manipulation. The only real issues of importance are a) did the communication succeed and b) did its message benefit the communicator, receiver or both of them in the long term. This is your base.

Let me give you a point of reference: I will argue that persuasive communications, initiated by selected individuals in governments and within organized religions have accounted for untold millions of deaths. Wars--holy ones or patriotic ones--all based on the in-group/out-group model--result from the ability of one or more individuals to persuade a large group of others to participate in killing themselves and/or other people. Pretty powerful communications right?

I do not smoke much anymore and eat very few fat hamburgers these days (although summers are tough with outdoor cigars and the Weber so close) so I don't like to see women being the target of communications that encourage such consumption. But that is, as the courts say "sales talk" and to a large extent properly protected free speech in democratic societies. And anyway, all that is ultimately quite trite in comparison to communications that result in genocide, murder, suicides and the like.

Its a short life: pick your targets carefully.

Yeah, this seems like really good marketing poking fun at something that may be archaic. Almost like an onion thing.