According to a June 2014 Russell Sage Foundation report, the average U.S. household experienced a real wealth decline of more than one-third over the 10 years ending in 2013.

Table 1 shows that the net worth of the median household fell from $87,992 in 2003 to $56,335 in 2013, for a decline of 36%.  In fact, the last ten years were hard on the overwhelming majority of American households.  Only the top 2 groups enjoyed wealth gains over the period.  Also noteworthy is the tiny net worth of households below the median. 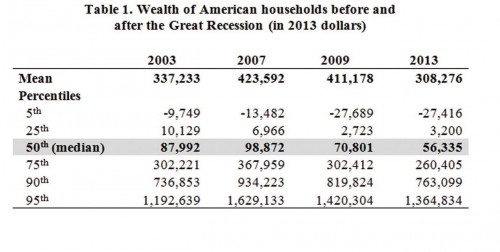 Figure 1 provides a longer term perspective on wealth movements.  We can see that most households enjoyed growing wealth from 1984 to the 2007 crisis, with wealth falling across the board since.  However, the median household is now significantly poorer than it was in 1984.  Only the richer households managed to maintain most of their earlier gains in wealth. 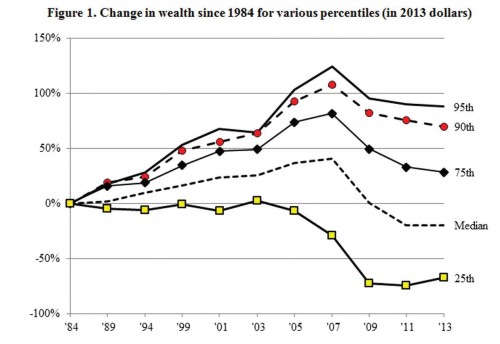 These trends highlight the fact that we have a growing inequality of wealth, as well as of income, and they are not likely to reverse on their own.

First, like Dan states below, you've got to separate income and net worth in your argument. Night and day.

Re: net worth, saw this study in the Times last week and added it to my pile of SWAGs at net worth in America. A year or so ago the Federal Reserve pegged the net worth of entry level 1%ers at $8.4 million, while the IRS calculated it at $1.5 million. Now Russell Sage is saying the entry to the to Top 5 (FIVE) % is $1.4 million? I love it...

No doubt the income gap is still growing in the wrong direction and I wish I could say the end was in sight, but these numbers confuse more than educate for variety of reasons, not the least of which is the fact that estimating net worth is hard to do. And simply using a common approach across individuals or households doesn't necessarily help.

So putting aside this particular measurement we're left with the key issue of inequality.

There is no simple answer. But individuals themselves can influence their own financial prospects by getting a STEM-based education and by working hard when they do find a good job or by going into business on their own. There are no guarantees and yes, it is easier for some to succeed in this world than others, but you've got to play the odds as best you can.

One thing we can predict with good certainty: The relatively uneducated are looking at a very difficult future, more so than ever before.

STEM education or training does not guarantee wealth. Many lawyers, doctors, and engineers are jobless, encumbered with insane debt. Unable to "bootstrap" themselves out of their academic achievements, many are silently committing suicide now. Our introverts who are rational problem solvers are killing themselves because they see their situation as a personal failing..