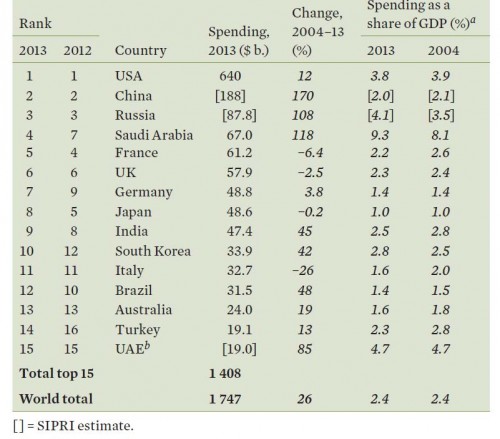 Although declining in real terms, the U.S. military budget remains substantial and a huge drain on our public resources.  As the following chart shows, military spending absorbs 57% of our federal discretionary budget. 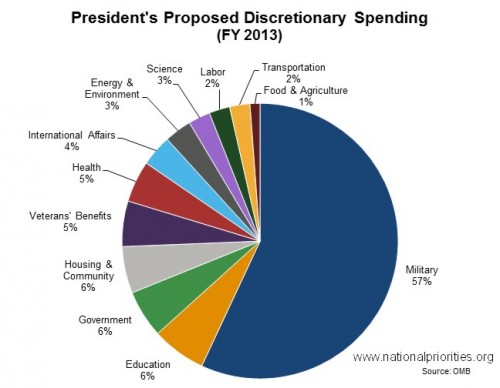 Notice that many so-called non-military discretionary budget categories also include military related spending. For example: Veteran’s Benefits, International Affairs, Energy and the Environment, and Science.   We certainly seem focused on a certain kind of security.

A large percentage of military spending goes to jobs for US citizens but we're spending a lot of money regardless. Of course the US could drop out of the arms spending game and let China and Russia take over its role. It'd be quite an interesting world don't you think?

If you are attempting to use the contents of the federal budget as a measure of relative prioritization of military over other types of "security," it's quite unfair to count only discretionary spending since most of the nondiscretionary budget is devoted to welfare and social security programs.

It would be interesting to see the statistics configured per capita, i.e., proportional to population size.

There're major benefits for this kind of show of power. The US suffers very little inflation compared to the rest of the world because the US dollar is the de facto currency of trade in the world. The US dollar is valued highly by everyone, everywhere. Further, US Treasury Bonds are considered highly stable and everyone's desire to buy them gives the US a very easy way to obtain cash. All of these benefits are afforded to the US because it is viewed as a very stable country, based on the incredible military might of the US.

Regardless, you may argue that US military spending is too high---i.e. the spending is much larger than what is needed to guarantee both stability and perceived stability. I don't know. Seems like a tough calculation.