I have borrowed the information and images below from Jeff Fecke at Alas A Blog.  His discussion, if you’re interested, is more in depth.

There is a winding line of counties stretching from Louisiana to South Carolina, a set of states that largely voted for McCain in 2008, that went for Obama.  The map below shows how counties voted in blue and red and you can clearly see this interesting pattern. 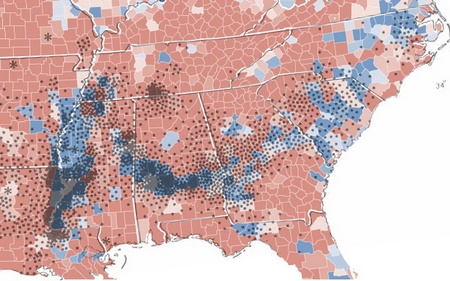 These counties went overwhelmingly for Obama in part because there is large black population.  Often called the “Black Belt,” these counties more so than the surrounding ones were at one time home to cotton plantations and, after slavery was ended, many of the freed slaves stayed.  This image nicely demonstrates the relationship between the blue counties and cotton production in 1860: 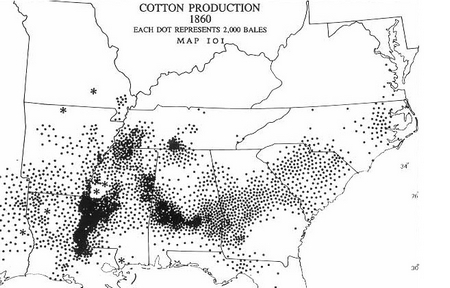 But why was there cotton production there and not elsewhere?  The answer to this question is a geological one and it takes us all the way back to 65 million years ago when the seas were higher and much of the southern United States was under water.  This image illustrates the shape of the land mass during that time: 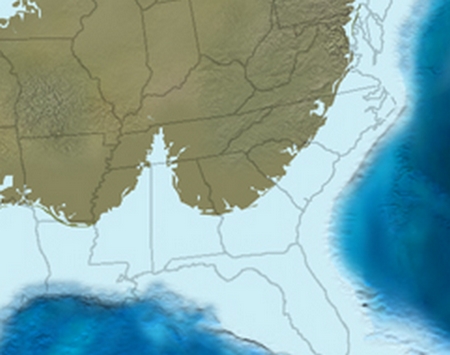 Along the ancient coastline, life thrived, as usually does. It especially thrived in the delta region, the Bay of Tennessee, if you will. Here life reproduced, ate, excreted, lived, and died. On the shallow ocean floor, organic debris settled, slowly building a rich layer of nutritious debris. Eventually, the debris would rise as the sea departed, becoming a thick, rich layer of soil that ran from Louisiana to South Carolina.

65 million years later, European settlers in America would discover this soil, which was perfect for growing cotton.

So there you have it: the relationship between today’s political map, the economy, and 65 million years ago.

Before Jeff Fecke's post at Alas, I saw this at Strange Maps, and the post there now has a comments thread of 149 messages (as I type this):
http://strangemaps.wordpress.com/2008/11/15/330-from-pickin-cotton-to-pickin-presidents/

So freak'n cool! I was just about to send it to all of my friends, before I remembered that most of my friends are nowhere near as nerdy as me.

I always say, that if I hadn't become a sociologist, I would have become a geographer...or a dharma bum...

after slavery was ended, many of the freed slaves stayed

I think you meant to say, "after slavery was ended, many of the freed slaves were forced to stay." "Vagrancy" laws, the "Black Laws" in Mississippi and other places, convict leasing schemes (and the programmes of mass arrest that fed them), and other tactics by white landowners made sure that there was an ample supply of exploitable and essentially movement-restricted black labour in that area. David M. Oshinski covers this in detail in Worse Than Slavery.

That is really interesting. Especially for someone from the UK.

[...] a Blog connects geology, slavery, and recent political history - check out the connection between the ancient Bay [...]

[...] check out Lisa’s post on geology, the economy, and the concentration of slavery in the [...]

The Geographical Distribution of Slavery - The Hairy Dog Review — September 16, 2013

[...] in parts. Hence the great promise to Southern blacks in his Emancipation Proclamation. And hence, according to the Society Pages, the political divide that currently exists throughout the [...]

Oh you and your 65 million years ago!

FYI, "the black belt" does not refer to the presence of African-Americans. It refers to the rich black soil of the region. Should all the black folks move away, it would still be the Black Belt.