Overweight Americans Have the Lowest Risk of Premature Death

Last year the Journal of the American Medical Association released a study aiming to determine the relationship between body mass index and the risk of premature death. Body mass index, or BMI, is the ratio between your height and weight. According to the National Institutes of Health, you are “normal weight” if your ratio is between 18.5-24.9.  Everything over that is “overweight” or “obese” and everything under is “underweight.”

This study was a meta-analysis, which is an analysis of a collection of existing studies that systematically measures the sum of our knowledge.  In this case, the authors analyzed 97 studies that included a combined 2.88 million individuals and over 270,000 deaths.  They found that overweight individuals had a lower risk of premature death than so-called normal weight individuals and there was no relationship between being somewhat obese and the rate of early death. Only among people in the high range of obesity was there a correlation between their weight and a higher risk of premature death.

This is two columns of studies plotted according to the hazard ratio they reported for people.  This comparison is between people who are “overweight” (BMI = 25-29.9) and people who are “normal weight” (BMI = 18.5-24.9).  Studies that fall below the line marked 1.0 found a lower rate of premature death and studies above the line found a higher rate. 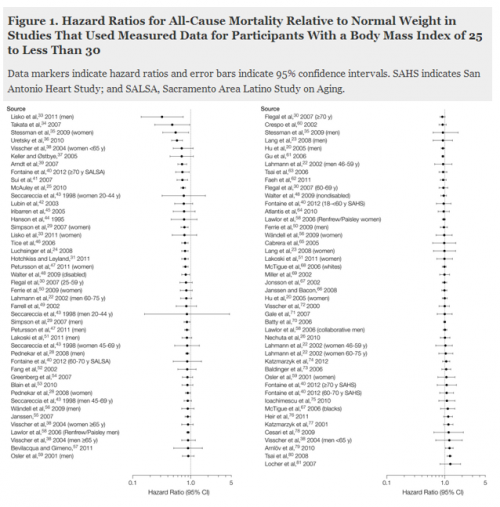 Just by eyeballing it, you can confirm that there is not a strong correlation between weight and premature death, at least in this population. When the scientists ran statistical analyses, the math showed that there is a statistically significant relationship between being “overweight” and a lower risk of death.

Here’s the same data, but comparing the risk of premature death among people who are “normal weight” (BMI = 18.5-24.9) and people who are somewhat “obese” (BMI = 30-34.9).  Again, eyeballing the results suggest that there’s not much correlation and, in fact, statistical analysis found none. 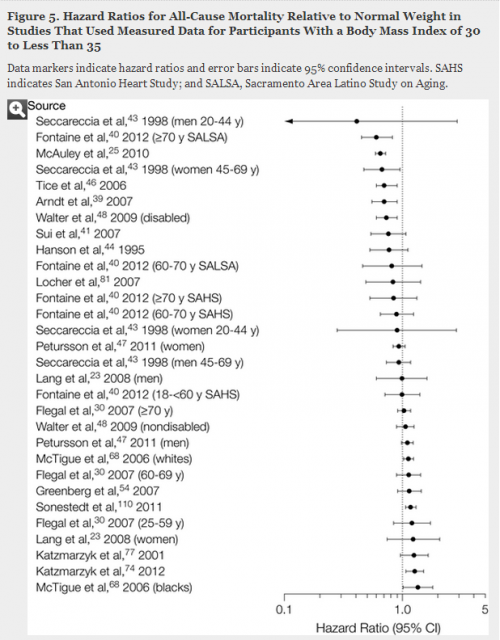 Finally, here are the results comparing “normal weight” (BMI = 18.5-24.9) and people who are quite “obese” (BMI = 35 or higher). In this case, we do see a relationship between risk of premature death in body weight. 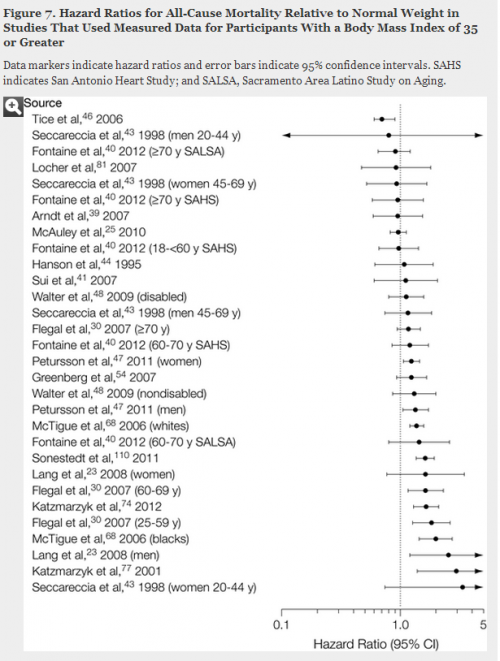 It’s almost funny that the National Institutes of Health use the word normal when talking about BMI. It’s certainly not the norm — the average BMI in the U.S. falls slightly into the “overweight” category (26.6 for adult men and 25.5 for adult women) — and it’s not related to health. It’s clearly simply normative. It’s related to a socially constructed physical ideal that has little relationship to what physicians and public health advocates are supposed to be concerned with.  Normal is judgmental, but if they changed the word to healthy, they have to entirely rejigger their prescriptions.

So, do we even have an obesity epidemic? Perhaps not if we use health as a marker instead of some arbitrary decision to hate fat.  Paul Campos, covering this story for the New York Times, points out:

If the government were to redefine normal weight as one that does not increase the risk of death, then about 130 million of the 165 million American adults currently categorized as overweight and obese would be re-categorized as normal weight instead.

It’s worth saying again: if we are measuring by the risk of premature death, then 79% of the people we currently shame for being overweight or obese would be recategorized as perfectly fine. Ideal, even. Pleased to be plump, let’s say, knowing that a body that is a happy balance of soft and strong is the kind of body that will carry them through a lifetime.

I'm of the opinion that no one dies before "their time." Silly me!

The weight tables are old. They expect a 6 foot man to weigh 175 pounds. This is not social construction or Barbie-figure worship; it's just old data badly grouped into categories by a team of doctors and public health types.

Having said that Americans eat too much, and eat too much garbage. No one needs to stave themselves to look like some socially idealized model, but sitting around all day with a bag of Cheetos at arm's length isn't too cool either.

Great study and you make great points in this post, many of which I agree with. However, all-cause mortality is not the only endpoint of interest. Obese people may or may not die any sooner, but there are a lot of other meta analyses showing that they do suffer from greater morbidity during their lifetime (diabetes, etc). I'm totally on board with questioning fat shaming and what is "normal" etc, but saying that obesity is "perfectly fine" is being too facile. I know you provided the caveat of "if we are measuring by the risk of premature death," but still think your statement is misleading to readers when you don't mention any of the other data easily available on other endpoints.

Why do they always leave out the underweight category? That shows the weight/risk curve is U shaped. Higher at both ends, lower in between.

It would be nice if discussions of the Flegal et al article would acknowledge that they are largely talking about older adults, so that relative risks of dying from any factor will be lower as the absolute number of deaths in any category is high.

The Flegal et al article came in for pretty significant criticism (http://jama.jamanetwork.com/article.aspx?articleid=1681397) from other researchers in the field.

Amazing how you always manage to cherry-pick the precious few articles that show a (very, very bare) glimmer of hope for health outcomes of obesity. Wideranging research showing the harms of obesity is being published practically every day, and yet you manage to track down an article from well over a year ago that cites research with obvious, glaring oversights and problems, that you don't even care because it gets in the way of your obesity epidemic denialism.

You're nothing but a denialist demagogue who is trying present obesity as a medically healthy variation of the human body. I look forward to your next article explaining that global warming is a socially constructed environmental harm because a completely flaw-free study suggested that a little bit of smog won't kill people exposed to it only at old age, and might in fact kill them less than fresh air; and so global warming as a whole needs to redefined as happy balance of acidic and putrid conditions that will carry us through a lifetime.

Just to note the study did not take into account the cost of health -- ie if it costs more to achieve the same mortality outcomes for as your weight increases.

I think this is misleading because people who die prematurely are, by definition, younger, and younger people (because they have faster metabolisms, are more active, have less stress, and so on) tend to be thinner than older people. I think most of us can attest to this. Who among us is not heavier than we were in high school or college? The longer you live, the more weight you tend to pack on, so I do not think the relationship is causal. I think the direction of causation is reversed.

The article suggests being overweight reduces your risk of death, but I think the longer you live, the more weight you pack on.

However, the article makes a great point about the socially constructed nature of "normal" weight: "It’s almost funny that the National Institutes of Health use the word normal when talking about BMI. It’s certainly not the norm – the average BMI in the U.S. falls slightly into the “overweight” category (26.6 for adult men and 25.5 for adult women) ... It’s related to a socially constructed physical ideal ... Normal is judgmental ..."

One thing I have potential issue with is did they correct for premature deaths that were due to non-medical causes? To clarify, I would guess that normal weight people are more active (running, biking, skydiving, SCUBA diving, hiking, camping, hand gliding, rock climbing, i.e. doing things which put themselves at greater risk of death by non-medical, accidental causes), and that those who are overweight and obese are more likely to sit at home and see the world through the TV, from the safety of their couches. I would be interested to see similar studies conducted that compared these "Hazard Ratios" amongst these groups that looked purely at deaths caused by chronic and acute medical conditions, like heart attacks, heart disease, cancer, diabetes, etc.

Maybe some of these studies do exactly that, but I'm not going to go through each of these cited papers and figure out which ones address my concerns.

While we need to better accept that "overweight" isn't necessarily unhealthy, we shouldn't jump to the conclusion that there are no ill effects to weighing more than you need to. Just because medical advances have made the adverse health effects of obesity manageable, doesn't mean obesity is a benign condition. If you live to a ripe old age of 90 with Type II diabetes, it doesn't mean you had a healthy life.

This article is misleading. It lumps “overweight” or “obese” together like they are the same thing, when they actually describe different ranges. The above is true for the "overweight" category which often includes athletes who weight more due to muscles mass. However, once you hit obese, the chart changes and there is an increase in premature death and number of other health issues. Bottom line is don't worry about a few extra pounds, but you should still pay attention to your fat ratios and not get too extreme in either direction.

Gotta say, this meta-analysis says more about the ineffectiveness of BMI as an indicator of health than anything else. BMI is by its very nature a blunt tool. I'm fine looking a health and wellness through a more nuanced perspective than the current overweight = bad and skinny = good. But it seems foolish to use an overly simplistic metric that in this case seems to justify a body positive ethic. It tacitly legitimizes those methods for which I would hope the author would find problematic and overly reductionist. The fact of the matter is we don't know as much as we think we do about diet, physiology and health outcomes as we think we do particularly because the tools of analysis that we employ are so arcane.

Wishing doesn't make it so. Being overweight is not healthier than than maintaining a healthy weight. This study has already been debunked repeatedly. http://drmirkin.com/public/ezine011313.html

[…] known, fat/overweight people live longer than thin/normal people.  Guess what? That same fact has been recently proven yet again in yet another mega-study, reporting “that overweight individuals had a lower risk of premature death than so-called normal […]

I'll be a terrible doctor if my only concern was if my patients die. I'm also very worried about their quality of life. Obesity might not kill them earlier, but their obesity-linked diabetes will lead to amputated feet. Obesity may not kill them earlier, but after their obesity-linked heart attack they won't be able to walk up two flights of stairs without getting short of breath. Not to mention the cost of medications for those conditions and the thousands cost to do post-heart attack procedures and surgery. I think I'm going to keep promoting activity and healthy weights.

This article has a very narrow view of health and wellness. Health isn't an absence of death.