U.S. Jobs Are Back, but They’re No Match for Population Growth

Last week CNN triumphantly reported that the job market has recovered to its 2008 peak.  Here’s the headline: 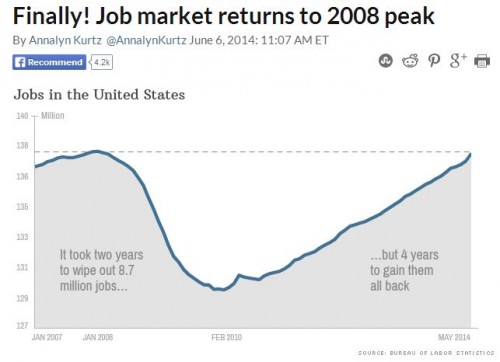 Not so fast, though.

Sociologist Philip Cohen observes that the real news is hidden in the fourth paragraph. There the author of the piece acknowledges that the job data are numbers, not proportions.  The numbers have bounced back but, because of the addition of almost 12 million people to the U.S. population, the percent of Americans who have jobs or are in school remains lower than it was in 2008.

Given population growth over the last four years, the economy still needs more jobs to truly return to a healthy place. How many more? A whopping 7 million, calculates Heidi Shierholz, an economist with the Economic Policy Institute.

Using the Bureau of Labor Statistics, Cohen offers us a clearer look at where we’re at: 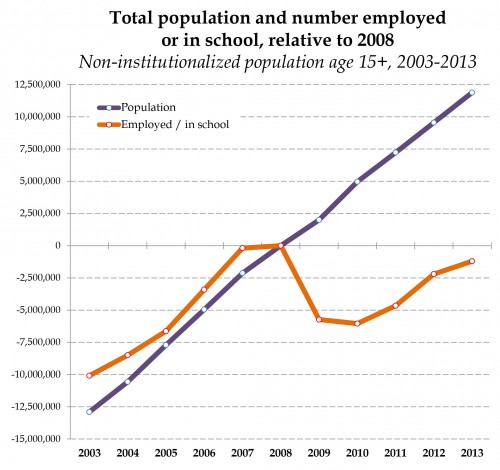 It is imperative that we fix the immigration problem, continue to focus on education and develop STEM skills in our economy. There will be fewer and fewer jobs for the relatively uneducated over time and if we want to continue to prosper we have no choice.

Another big problem is that full-time jobs have plummeted. The uptick is only in part-time jobs.

does the total amount of the population include people who are disabled and exempt from employment, such as seniors and minor children?

It would be interesting to see this data broken down to see what percentage of these "recovered" jobs are going to legal and illegal immigrants.

If it's a significant percentage then the plight of US workers hit by the recession and struggling to get back on their feet is even worse than suggested here by Wade.

A moratorium on legal immigration and strict enforcement of labor laws prohibiting use of illegal labor is one of the least invasive and most effective ways that government could put millions of US workers back to work (especially youth and minorities), and drive wages and benefits up for lower middle class and middle class workers.

Here you can find the latest jobs...
ALL JOBS ARE REAL AND ACTIVE.
http://vacancy-jobs.com

Another factor is that we are paying for a significant upswing in Hispanic immigrant fertility that occurred about 20 years ago, when the 1986 amnesty started taking effect. The journal articles on that upswing are out there. Now all those babies are 20 somethings that need jobs, but unfortunately tend to be (on average) way below the non-hispanic white norm in terms of education and skills.