A Way for Feminism to Overcome its “Class Problem”: Unions

The Nation sparked a robust discussion last week with its incisive online conversation, Does Feminism Have a Class Problem? The panelists addressed the “Lean In” phenomenon, articulating how and why Sheryl Sandberg’s focus on self-improvement – rather than structural barriers and collective action to overcome them – angered quite a few feminists on the left.

While women of different economic backgrounds face many different realities, they also share similar work-life balance struggles. In that vein, the discussants argue that expanding family-friendly workplace policies – which would improve the lives of working women up and down the economic ladder – could help bridge the feminist class divide.

A growing body of research indicates that there are few other interventions that improve the economic prospects and work-life balance of women workers as much as unions do. A new report from the Center for Economic and Policy Research (CEPR), which I co-authored with my colleagues Janelle Jones and John Schmitt, shows just how much of a boost unions give to working women’s pay, benefits and workplace flexibility. 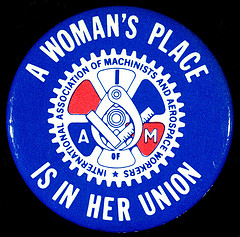 For example, all else being equal, women in unions earn an average of 13 percent – that’s about $2.50 per hour – more than their non-union counterparts. In other words, unionization can raise a woman’s pay as much as a full year of college does. Unions also help move us closer to equal pay: a study by the National Women’s Law Center determined that the gender pay gap for union workers is only half of what it is for those not in unions.

Women make up almost half of the union workforce and are on track to be in the majority by 2025. As women are overrepresented in the low-wage jobs that are being created in this precarious economy – they are 56.4% of low-wage workers and over half of fast food workers – unions are leading and supporting many of the campaigns to improve their situations. In an important sense, the union movement already is a women’s movement.

Education and skills can get women only so far. It’s a conundrum that women have surpassed men when it comes to formal schooling, yet women have made little progress catching up on pay. Many women who do everything right — getting more education and skills — still find themselves with low wages and no benefits.

With unions already playing a central role in helping to meet the needs working women and their families in the 21st century economy, anyone concerned about the well-being of women should also care about unions.

Nicole Woo is the director of domestic policy at the Center for Economic and Policy Research.  This post is based on her new study,  “Women, Working Families, and Unions,” and originally appeared at Girl w/ Pen!

And now we wait for the inexplicable anti-union vitriol. Hopefully not. Less snarky: unions are often at least a partial solution to many work and career problems, but, sadly, they also are a very bad word in modern political discourse.

Unions are rightfully associated with a mindless, heads-down and follow the rulebook approach to worklife--not something most creative and high-achieving people, men or women, find particularly attractive.

I suppose if the lawyers and political moneygrubbers didn't steal the management of American unions they might have turned out to be a force for progress, but the book on this thing is closed.

This is only partly true. To make a real difference, the unions themselves have to prioritize women's working conditions specifically, and you better hope that your particular union doesn't organize a field dominated by women if your want a decent wage. As always, the problem with social movements is its lack of intersectionality: feminism doesn't do class well, and unions don't do gender well.