One Hundred Years of the Fridge 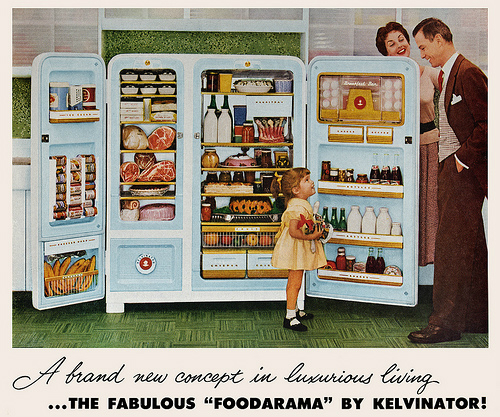 Since their invention in 1913, and since this Kelvinator ad first ran in 1955, refrigerators became bigger, better, and went from a luxury to a necessity. It’s nearly impossible to imagine life today without having somewhere to store your vegetables and a place to keep your leftovers: in the one hundred years it’s been around, the fridge altered our grocery shopping habits and our attitudes towards food.

Appliance companies and advertisers worked hard to transform refrigerators from “a brand new concept in luxurious living” to an everyday household object. They succeeded in the 1960s, after years of fine-tuning its features to appeal to the middle-class housewife, writes historian Shelley Nickles. Besides ensuring the fridges were spacious, easy to clean, and had adjustable shelving, designers even took care of minutiae such as including warmer compartments – so that the butter kept in them would be easier to spread. Having attracted the housewives’ attention and become affordable with ideas such as government-sponsored fridges floating around, the appliances made their way into middle-class homes.

Buying too many perishable items suddenly became a minor concern. Buy one, get one free! Get more value for your money – purchase a bigger container! As the number of fridge compartments increased, so did the number of refrigeration-dependent foods and “supersize” deals offered in stores (or the other way around). Ultimately, grocery shoppers – mainly women – returned home with more food than they otherwise would have. Fridges enabled families to stock up, and the major weekend grocery haul was born. Now we have this.

But while having a fridge to store all the groceries made it possible to save more on “deals” at the supermarket, it also enabled us to waste more later on. That is because the fridge operates much like a time machine, but not without its limits. Sociologists Elizabeth Shove and Dale Southerton describe freezers as appliances that allow us to manage time: in addition to no longer having to shop multiple times per week, we can now prepare our meals in advance. The same holds for refrigerators.

Food has its own rhythm, however, and a fridge can only delay the inevitable for so long. Leftovers simultaneously get pushed down in the hierarchy of what we’d like to eat, and pushed back on refrigerator shelf, only to be forgotten and perhaps rediscovered when it’s already too late. An exotic fruit rots in the produce compartment after its exciting novelty wore off, and we were no longer sure what to do with it. And so they all end up in the trash. Domestic food waste only represents part of all the food thrown away in the U.S. today – about a third of all that is produced – but the way fridges altered out food purchasing and consumption habits is partly to blame.

Not all is bad, however. Fridges not only allow us to eat a greater variety of foods and be more efficient in our everyday lives, we use them as centers of communication and managing household life. And as they become smarter, more energy-efficient, and with some individuals refusing to use them altogether, these cultural objects will doubtless have more stories to tell in the next hundred years.

Teja Pristavec is a graduate student in the sociology department, and an IHHCPAR Excellence Fellow,  at Rutgers University. She blogs at A Serving of Sociology, where this post originally appeared.

This post vastly understates the value of a fridge for women, who are expected to do the shopping, cook food, and save time in a number of ways. I'm currently living without a fridge in a very poor country where most people don't have reliable electricity. As a woman working (temporarily) in an office and who doesn't have a family or house help (my male and female colleagues have family or a cook who prepares the meals), I am at a solid disadvantage in terms of time to take care of myself and eat healthy meals. On the other hand, compare this with my daily life in a big American city, where I can eat quickly, on time, and conveniently.

(Approximately) One Hundred Years of the Fridge | A Serving of Sociology — July 7, 2014

...one of the best inventions ever! In the same league as the light bulb, penicillin, and the transistor (and outlasting at least 2 of those 3!).

But now it's come to this: On order--I kid you not--the $8,000 refrigerator, a Miele with custom paneled doors and handles.

Finally, who stocks their frige with 14 bars of cream cheese and no beer? That picture is nuts.

There were iceboxes prior to refrigerators, which enabled a small amount of storage.

The fridge also accelerates the deterioration of certain vegetables and fruits. There is a wide variety of produce that should never be refrigerated. Similarly, in most climates, butter is fine outside of the fridge. Our government requires an absurd washing regime for eggs, otherwise they are just fine for weeks without refrigeration.

So yes, it is useful for many things. But I wonder if misused refrigeration accelerates our wastefulness in yet other ways. I have many friends who never buy fresh produce because they claim they can't use it before it "goes bad" - turns out they're storing it completely improperly.