Mean and median are two measures of “average.”  The mean is the average as we typically think of it: the sum of things divided by the total number of things.  The median, in contrast, is literally the number in the middle if we align all the quantities in order.  People often use median instead of mean because it is insensitive to extreme outliers which may skew the mean in one direction or another.

For a quick illustration of the difference, I often use the example of income. I choose a plausible average (mean) for the classroom population and review the math. “If Bill Gates walks into the room,” I say, “the average income is now in the billions. The median hasn’t moved, but the mean has gone way up.” So has the Gini coefficient.Here’s a more realistic and global illustration – the net worth of people in the wealthier countries.  The U.S. ranks fourth in mean worth – $301,000 per person… 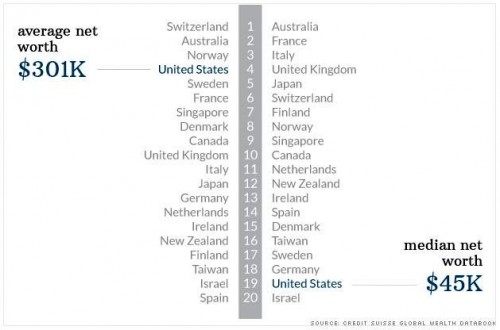 …but the median is far lower – $45,000, 19th out of the twenty nations shown.  (The graph is from Credit Suisse via CNN.)The U.S. is a wealthy nation compared with others, but  “average” Americans, in the way that term is generally understood, are poorer than their counterparts in other countries.

You explain mean and median, which I already knew, but not Gini coefficient, which I knew at one time but have forgotten.

I can't help wonder how the data were collected and what reporting biases might be at work.

It is also interesting to note that the US ranks very high in rankings of median household income, only falling below small countries like Finland, Denmark, Norway, etc. High income and low net worth = low savings rate?

What are the other numbers? How big is the gap between 1st and 19th?

[…] seen from the top and as seen from anyplace up can be seen in this graph, meant to demonstrate the difference between “average” and “median” net worth. I guess that’s how we ended up with a couple millionaires arguing about which one is […]