Becoming Wealthy: The Myth of Meritocracy

How do people in the U.S. become wealthy?  According to the myth of meritocracy, they do so by hard work: blood, sweat, tears, a trace of talent, and a tad bit of luck.  This is the story told in this two-page ad for U.S. Trust in The New Yorker: 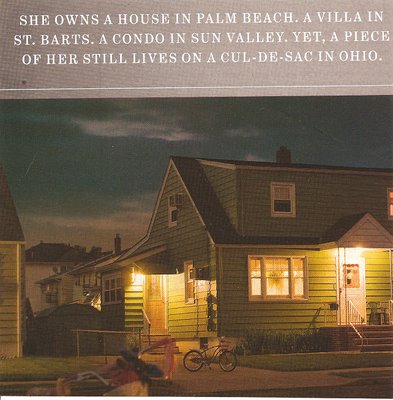 On the first page we learn she’s rich, but she’s still a home-town girl at heart. On the second page, we learn a little about how she might have gotten so wealthy: 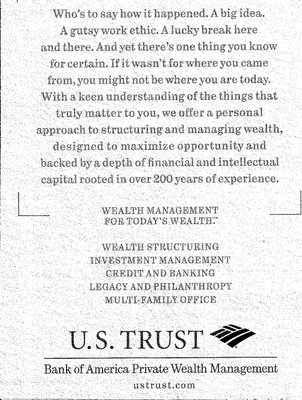 Who’s to say how it happened. A big idea. A gutsy work ethic. A lucky break here and there.

Well, uh…what about, “She inherited it”? That’s a pretty common way to end up with a whole bunch of houses and in need of a wealth management team.

The notion that rich people are rich because their parents are rich, however, interrupts the American mystique, the one where we are a country of self-made immigrants who pulled ourselves up by our bootstraps.  People, even people who inherited wealth, like to think that they’re rich because they worked hard.  Hence, the romanticization of the self-made millionaire in the ad and the corresponding invisibility of the inheritance loophole.

On the flipside, this narrative also supports the converse idea that the poor are poor because of their lack of personal efforts and merits.  Perhaps they didn’t have a “big idea’ or the “gutsy work ethic” that enabled them to profit from the lucky break that they inevitably encountered, right?

This ad is just one drop in the sea of propaganda that makes it seem right and normal that a small proportion of our population is able to hoard wealth and property.

I count inheritance as a lucky break.

I think it's interesting they used a woman as the subject instead of a man.

This to me is fantastic. It really upsets me when I hear about people who "made it" or that you can "make it" through good old fashioned hard work.
Am I not working hard?
Is the mailroom person or the janitor not working hard?
Not to mention that a lot of these people who "made it" through hard work wouldn't want to climb to the top by doing a janitor's work.

Notice it doesn't say it was HER big idea or work ethic.

Only a very small percentage of wealthy people got their money through inheritance. Most earned it themselves by working in high-paying environments, and most of them have strong educational backgrounds in desirable (STEM) fields. The top earners are often leading execs in companies they have ownership interest in; they're the 90-hour-work-week crowd.

You can always find exceptions but financial success usually requires valuable skills and hard work. (It DOES help to have a stable family environment that values education as a child...)

"Luck is the residue of design."

"People, even people who inherited wealth, like to think that they’re rich because they worked hard."

People, even people who inherited wealth, like to think that they’re rich because they worked hard. Hence, the romanticization of the self-made millionaire in the ad and the corresponding invisibility of the inheritance loophole. http://to.ly/zX0T

Actually, if you look the advertisement from the second page, you'll see that it states, "And yet there's one thing you know for certain.If it wasn't for where you came from, you wouldn't be where you are today." Those terrible propagandists, saying the exact same thing that you say they aren't saying!

This article is absolutely idiotic. It sounds like this woman has something against rich people

Why is it called "hoarding" property when they were able to buy it or keep what was in their family? Am I to be labeled a "property hoarder" if I decide to keep my father's lake house, which he earned with his teacher's salary, saved up for and purchased for his retirement? I don't get this viewpoint. It is strange to me that someone would label other people "hoarders" simply for keeping something in the family.