Saturday Stat: Women’s Refusal to be Deferent and the Words that Describe Them

According to data gathered from the Corpus of Contemporary American English by linguistics PhD student Nic Subtirelu, women are called “pushy” twice as often as men, while men are more likely to be described as “condescending.” 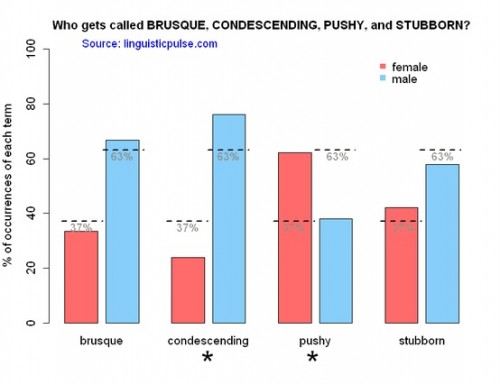 Condescending seems to differ from pushy and bossy in an important way, namely that it seems to acknowledge the target’s authority and power even if it does not fully accept it.

Subtirelu has also ran the numbers for “bossy” and found that it was used to described women 1.5 times more often than men.

You're walking us down the garden path in a really weird way with this one. So I'm calling bullshit; I'm not buying the connection between the data and your headline.

This seems likelier to be an effect of the gender imbalance in positions of power than a cause of it.

How much productivity is lost when women managers have to constantly self-sensor and re-frame their directions to avoid being viewed as pushy/bossy? I know I spend A LOT of time crafting requests so as not to offend.

[…] a great discussion about friendship, specifically the importance of men having women as friends. At Sociological Images, Lisa Wade explores the words used to police women who refuse traditional female deference. And, at […]